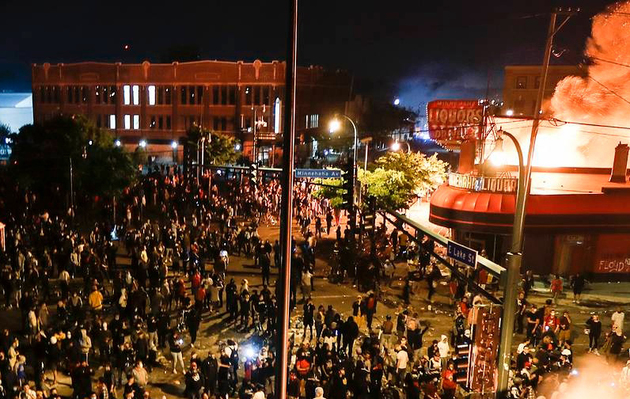 Despair and pessimism. Probably, these words can be used to characterize publications in the American media devoted to the internal situation in the country. Fiasco and disaster. These are the assessments of the majority. Two problems that have caused many others problems and shaken the reputation of the United States as a superpower: coronavirus and anarchy. The New York Times writes that Florida reported almost as many new Covid-19 deaths as the entire European Union, the population of which is 20 times larger than this American state.

At the same time, the blame for the disaster is placed on President Donald Trump, who refused to recognize the epidemic as a national threat and demonstratively disregarded the recommendations of epidemiologists until recently, refusing to wear a medical mask and setting a bad example for the whole country. More precisely, its part that recognises him as "their'' president. To match the leader, similar frivolity was shown by the heads of the so-called local administrations, members of the Republican Party or those close to it.

The fathers of the modern U.S., defending their position, referred to economic interests. Sometimes they did it too cynically, recommending to calculate what is less harmful - an epidemic that kills Americans, or stopping the economy for quarantine purposes. The NYT writes that the catastrophe is that the economy still declined, although many experts predicted more sad results. Financial support of socially vulnerable groups turned out to be not so effective either. Only a certain category of people had unemployment benefits, which were only partial. However, catching the growing discontent, the authorities hastily adopted a law to expand financial support, and those who lost their jobs due to the pandemic were given $600 more weekly.

But the actions of the authorities turned out to have a hidden agenda. Yes, the increase in financial aid has cushioned the impact of the crisis that destroyed more than 20 million jobs. Yes, it helped those economies that abandoned quarantine to survive, as new unemployed would cut their spending, which would cause a decline in trade, which in turn would lead to new cuts, a new wave of unemployment, mortgage and housing problems, special problems, and, possibly, replenishment of the outrageous "anarchists" army across the U.S. However, on the other hand, the Supplemental Nutrition Assistance Program is drafted in such a way that the $600 co-payment can be received one week before the end of the month. This is a complicated scheme, the meaning and expediency of which only the law's authors understand. In fact, The NYT writes that it turns out that incomes of millions of unemployed will suddenly drop by 60% or more in the last week of the month. According to the article, it indicates a poor understanding of the general situation by the authorities, because they do not hide their hopes for a quick economic recovery, not imagining the possibility of a second coronavirus wave and the ongoing outrage provoked by the sensational murder of the black man by a white policeman during his arrest.

The riots exposed a number of other problems that were considered obsolete in the world's "most prosperous country". It turned out that racism has not gone anywhere - thousands of whites have announced their readiness to take up arms if the authorities are unable to put an end to the bacchanalia that is destroying cities and towns. It turned out that the "anti-racism" of people of color towards whites had long been added to traditional racism. It turned out that the tension between the north and south remains from the time of the Civil War. It turned out that the Americans are not just respectful and proud of the police, but quite the opposite. It turned out that the famous American patriotism has more to do with films and books, and not with real life with too many people seeing the country not as a home, but as a place for extracting personal benefits. This is a catastrophe. Where is the American Dream? What's it like now? What replaced it? How to form a new worthy one, capable of attracting young people and igniting them with this very dream? There are too many questions, both practical and philosophical, for both the American authorities and American society to give quick answers. These questions are too complex to answer them before the presidential elections, which are increasingly beginning to resemble for Trump a thundercloud that suddenly appeared in the recently cloudless sky.

In terms of foreign policy the situation is not great either. There is no sign of the impending defeat of the Celestial Empire's defeat in the trade war with China. There's ongoing sanctions confrontation with Russia, which cannot be canceled without losing face. There are growing contradictions with the European Union, including publicly expressed doubts by German Chancellor Angela Merkel about the ability of the United States to protect Europe. There are turbulent relations with Turkey, inefficiency in the Middle East. In addition, there was sharp criticism from Japan, which publicly reproached the United States for deliberately hiding data on coronavirus cases at U.S. military bases in Okinawa. The Japanese were especially outraged by the fact that the American military from the bases with the coronavirus outbreak celebrated U.S. Independence Day, spreading the infection among local residents. As a result, the governor of the island demanded the American leadership through the country's foreign ministry to lock the soldiers at the bases until better times and in order to avoid a big scandal.

In general, the United States has bad days now. This is a test of strength, but also the need to act today in the name of tomorrow.