President of Armenia Serzh Sargsyan and Catholicos of all Armenians Karekin II undertook a short visit to Tbilisi. They participated in the re-dedication of the reconstructed Cathedral of St. George. The visit wasn’t highlighted, as the Georgian authorities turned out to be in a delicate situation because of Patriarch Ilya’s position.

The re-dedication of the cathedral of the Georgian Eparchy by the Armenian Church was a favorable platform for talks at the top level. According to Vestnik Kavkaza, during the meeting at the Avlabar Palace – the residence of the head of the Georgian state – Giorgi Margvelashvili and Serzh Sargsyan discussed ways of cooperation in a situation when the two neighboring countries are members of different economic unions. Georgia has signed the agreement on deep and comprehensive trade area with the EU, while Armenia has joined the EAEU. “The involvement of our states in different integration structures doesn’t prevent, but even encourages opportunities for comprehensive cooperation, outlining new horizons for implementation of mutually beneficial bilateral and multilateral programs,” the President of Armenia stated at a press conference with his Georgian colleague. The State Office told Vestnik Kavkaza that during the meeting with Prime Minister Irakli Garibashvili, the sides “discussed the opportunities to provide infrastructural programs of regional importance.” It seems it also touches on reconstruction of direct railway communication from Russia to Armenia through the territory of Abkhazia and Georgia. Meanwhile, there is no consent on the issue between the sides, as Tbilisi and Yerevan understand clearly that the problem can be solved only by two players – Moscow and Baku. The President of Armenia especially stressed during the two meetings that the main goal of his visit was participation in the re-dedication of the Armenian church to God.

The double visit by the state and spiritual leaders of Armenia to the neighboring country became a historic and unprecedented event. The Armenian side tried to emphasize the importance of the reconstruction and re-dedication of one of the most important churches for Armenia, which was thought to have been “a cathedral symbol” and a spiritual center of the Armenians in Tbilisi for several centuries.

It is sufficient to say that the church was built by Umek, an Armenian merchant (or a prince), in 1251. Since that time it has been rebuilt many times. The great Armenian poet Sayat-Nova (1722-1795) was buried next to the church. He created poems not only in Armenian, but also in Georgian and Azerbaijani. Commanders of the Russian Emperor’s Army, Count Mikhail Loris-Melikov (1824-1888) and Ivan (Ovanes) Lazarev, (1820-1879) were also buried there. 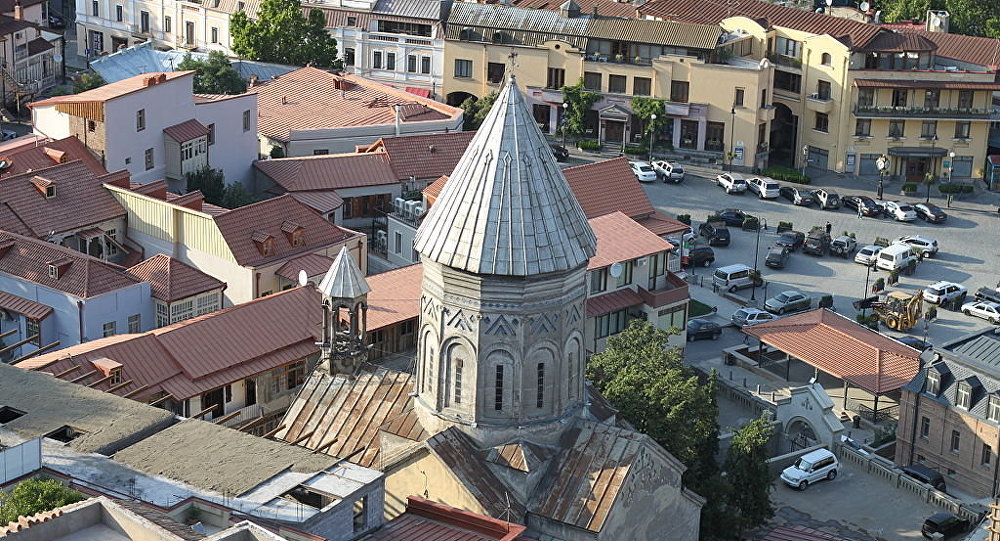 The St. George Cathedral is thought to be the oldest of the current operating Armenian churches in Tbilisi. For centuries it was declining – at first in the Soviet Communist period, later due to disputes between the Georgian and Armenian Patriarchies about the rights to and origins of churches on the territories of Georgia and Armenia. And in the late 1980s several earthquakes almost destroyed the St. George Cathedral.

However, in 2012 reconstruction of the cathedral was begun by the ‘Development of Armenia’ Foundation. The Armenian Community in Tbilisi and the Eparchy of the Armenian Church in Georgia were the initiators of the process. It was supported by the former Premier, the founder of the ruling Georgian Dream coalition, Bidzina Ivanishvili.

However, Armenian sources intentionally stressed that the contribution by the Georgian benefactor towards the reconstruction of the cathedral wasn’t crucial, even though it was significant, along with contributions by the Vardanyan family, Albert Avdolyan, and Sergei Sarkisov.

A grateful statement by the head of the Eparchy, Bishop Vazgen Mirzakhanyan says: “We pray for those who are giving new life to the St. George Cathedral today. We bless the families of Vardanyan, Ivanishvili, Sarkisov, Khachaturov, Nakhapetyan. Let God’s grace and blessings be with you for your good and godly deeds.”

Bidzina Ivanishvili, who stated in 2012 that he was ready to reconstruct the St. George Cathedral on his own, could sponsor the project 100 percent. In the last 10 years he has spent about $70 million on construction and reconstruction of churches in Georgia. But this time the billionaire showed delicacy, and viewed kindly the Armenian side’s request to make “a joint contribution” to the reconstruction of the main Armenian church in Tbilisi. 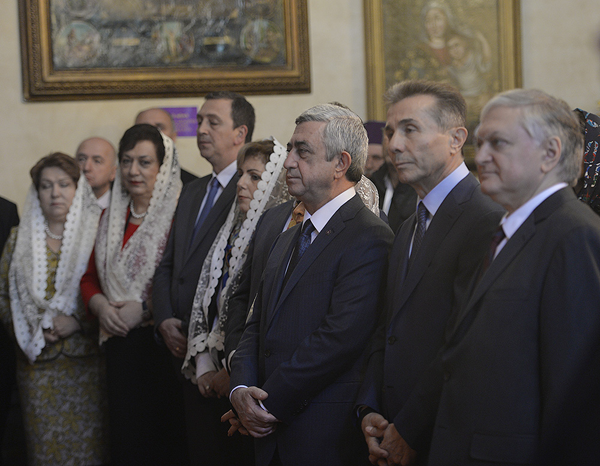 Ivanishvili personally visited the ceremony of re-dedication of the cathedral together with the President of Armenia. The ceremony was conducted by Karekin II. As for the Georgian side, there were the Minister of Culture and Preservation of Monuments, Mikheil Giorgadze, the Minister for Refugee Affairs, Sozar Subari, and the State Minister for Peacemaking and Civil Equality, Paata Zakareishvili. However, there was neither Georgian President Giorgi Margvelashvili nor Premier Irakli Garibashvili. They didn’t visit the important ceremony, which was attended by President of Armenia, as the head of the Georgian Orthodox Church Ilya II was absent.

This didn’t stop Bidzina Ivanishvili from participating in the re-dedication, who is thought to be the real head of the government and the most powerful person in the country. Relations between the heads of the two Churches cannot be called cloudless due to disputes over possession of churches. However, it seems Ivanishvili doesn’t think that this was a big problem. After the re-dedication of the St. George Cathedral, he called the disputes “pleasant” and puzzled everyone once again. “We have been neighbors for many centuries and there have been almost no offenses between us. And disputes about possession of monuments are pleasant and symbolic. Friendship between countries is a difficult thing, but we never did anything but make friends during our whole history. The reconstruction of the Armenian church is over. It is very beautiful, and I am proud that I have participated in it,” the benefactor noted. Karekin II awarded Bidzina Ivanishvili the Order of Grigori the Enlighter for his contribution to the reconstruction of the Armenian Cathedral.