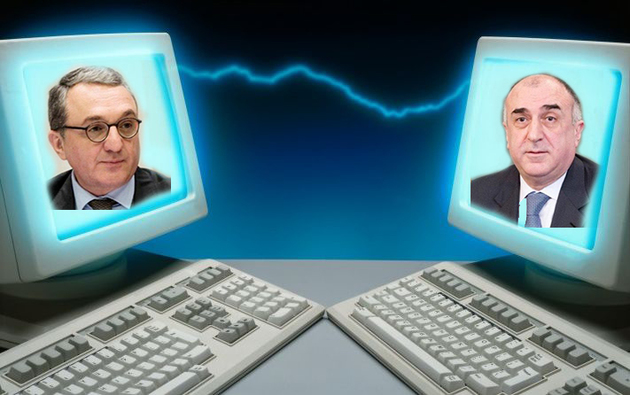 The coronavirus pandemic made adjustments to the Karabakh conflict negotiation process. Contact groups, as well as diplomats, hold video conferences. On June 30, Armenian Foreign Minister Zohrab Mnatsakanyan and Foreign Minister of Azerbaijan Elmar Mammadyarov held a video conference with the participation of mediators from the United States, France and Russia. However, they only exchanged recommendations. The video conference lasted about an hour, which is not really productive, since in the history of the Karabakh peace process there were talks which lasted many hours and many days.

What did Mnatsakanyan and Mamedyarov say to each other? Azerbaijan once again recalled Armenia's illegal activities in the territory of occupied Karabakh and the need to comply with international agreements on the de-occupation of the territory of the former Karabakh autonomy and seven surrounding areas. For some reason, the Armenian side described Azerbaijan’s rhetoric as warlike, reading out a traditional set of theses. Armenian diplomacy traditionally refers to Azerbaijan's military doctrine, defining it as the main threat to the security of the negotiation process.

It was not worth it to expect a breakthrough from such unusual talks. It is much more interesting to look at what happened after the video conference during Mnatsakanyan’s working visit to occupied Karabakh on July 4. According to the Armenian foreign minister's statement, Yerevan still tries to ensure the participation of the self-proclaimed regime in the Karabakh talks, although the format of the negotiations has been repeatedly approved and does not imply the participation of the unrecognized "NKR".

During the video conference, this issue was not discussed. However, this does not prevent Zohrab Mnatsakanyan from assuring the public of the unrecognized "NKR" of the need to involve the "new" Karabakh authorities in the peace process. The position of the top Armenian diplomat fully repeats Armenian Prime Minister Nikol Pashinyan's statements made in the summer of 2018. It seems that Armenian diplomats have nothing to add with the exception of words about effective cooperation between Armenian and so-called Karabakh diplomacy over the past two years.

What is the effectiveness of cooperation between Armenia's Foreign Ministry and the "NKR Foreign Ministry"? The self-proclaimed "diplomatic agency" does not bear any international obligations. International practice does not allow diplomats of unrecognized entities to participate in interstate agreements. The de facto "NKR Foreign Ministry" exists in a space of complete irresponsibility, since an unrecognized state does not have partners who would raise the question of responsibility in case of violation of international law. The activities of the unrecognized republic's so-called Foreign Ministry can be reduced to consultative work, as well as diaspora politics, which in no way affects the speedy settlement of the Karabakh conflict. On the other hand, the presence of a rudimentary diplomatic service allows the Armenian Foreign Ministry to appear before the public as an advocate of the fundamental issue of the participation of the separatist leadership, despite the fact that this is obviously not feasible.

However, if we consider the Karabakh conflict situation in terms of slowing down the negotiation process, then the Armenian Foreign Ministry copes with its task. Although it is not clear what the Armenian side is striving for, since the issue of restoring territorial integrity is a matter of state importance for Azerbaijan, and nothing can change the priorities of Azerbaijani foreign policy. As for international institutions, the likelihood that the United Nations will revise its fundamental principles in order to recognize the occupation is unlikely. Thus, in terms of the conflict settlement, delaying the peace process is pointless.

At the same time, the threat of the novel coronavirus infection spreading in Karabakh may hinder the negotiation process. Perhaps Yerevan will try to take advantage of the situation by manipulating information about the epidemiological situation, since only the Armenian side knows real data. Therefore, it was proposed to postpone the discussion of possible meetings, as well as the co-chairs' visit to Armenia and Nagorno-Karabakh for an indefinite date.