Caesar Act: How will new US sanctions on Syria be different? 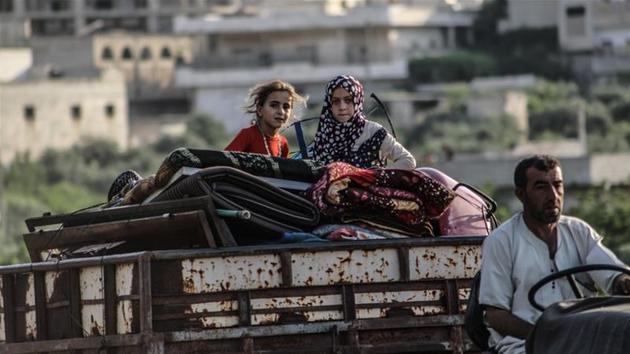 New US sanctions on Syria coming into force this week intend to pressure the government of President Bashar al-Assad into enacting human rights reforms much more strongly than previous sanctions. Al Jazeera reports in its article Caesar Act: How will new US sanctions on Syria be different? that although UN sanctions on Syria are nonexistent because of Russian and Chinese vetoes against such a move, many countries - including the US and EU member states - have unilaterally imposed punishing sanctions on the Syrian government since the start of the 2011 uprising. But their effectiveness has been questionable.

On the other hand, the new raft of US sanctions, known as the Caesar Act, targets companies, institutions and individuals - both Syrian and foreign - that do business with the government of President Bashar al-Assad by authorising bans and financial sanctions on current and potential Syrian partners.

Named after the pseudonym used by a Syrian military officer who leaked more than 50,000 photos documenting torture and other human rights violations and atrocities in al-Assad's prisons, the legislation received bipartisan Congressional support, allowing it to pass in December last year as part of the US's annual defence spending.

From Wednesday, the act will target supporters of the al-Assad government in politics, business and banking, reaching all the way to Lebanon's Hezbollah and partners in Iran, Russia and even Gulf states and Europe, with individuals potentially facing travel bans or even arrest.

"The new US sanctions will be far broader in terms of their sectoral targeting, but also, critically, will involve US targeting of other countries and businesses seeking to do business with the Syrian government in a bid to ensure Syria's tightening economic isolation," Julien Barnes-Dacey, director of the Middle East and North Africa programme at the European Council of Foreign Relations (ECFR), told Al Jazeera.

According to Zaki Mehchy, a senior consulting fellow at Chatham House and co-founder of the Syrian Centre for Policy Research, the sanctions have an implicit message as well.

US sanctions on Syria go all the way back to 1979, when Washington listed Damascus as a sponsor of "terrorism", imposing restrictions on the trade of "dual-use" products with Syria that can be used for both military and civilian purposes. US pressure on the Syrian government then expanded with a 2011 executive order that banned trade in Syrian oil after it prohibited in 2004 the export of US goods - except for food and medicine.

More recently, Washington sanctioned specific Syrian individuals and institutions after it held the government responsible for a deadly sarin gas attack that killed more than 80 people, including women and children, in the northern Syrian town of Khan Sheikhoun in April 2017. While these sanctions targeted the Syrian military or security personnel, business people, and government and private companies working mainly in the oil and gas and banking sectors, their impact was limited in restricting the al-Assad government's ability to trade and secure external financial support.

According to Barnes-Dacey, US sanctions to date, which he described as a "combination of both targeted measures against individuals complicit in war crimes and those seen as helping prop up the regime" have had a "narrower" impact compared with the new legislation.

Rim Turkmani, research fellow at the Conflict and Civil Society Research Unit at the London School of Economics, cast doubt on the effectiveness of previous sanctions. "The main aims of the sanctions were to change the regime or/and to change its behaviour so that it doesn't use excessive violence against civilians. Clearly, both aims were not achieved," she said. Mehchy said the sanctions had not only "failed to change the regime or its behaviour" but also "hit ordinary people the most ... and led to the emergence of warlords and new cronies that are able to overcome sanctions through their illegal international connections and networks".

When it comes to the Caesar Act, however, experts agreed the new sanctions will have a hugely chilling effect, even though many remained uncertain how they will be imposed. "There is still huge uncertainty about how exactly the sanctions will be implemented," said Barnes-Dacey. "The end result will be a hugely restrictive environment for anyone wanting to do business in Syria, extending from the private sector all the way across to humanitarian activities despite technical exemptions. The country is already devastated, and these measures will help to push it over the edge in a way that is highly unlikely to deliver a positive outcome in terms of the regime making serious concessions or Russia deciding to suddenly force Damascus in a desired new direction," Barnes-Dacey said.

Syria's economy has been in freefall over the past few months with the pound losing about 70 percent of its value, making the price of basic commodities now unaffordable to many Syrians. The economic pinch has led to protests breaking out in government strongholds, such as Latakia and Suweida, which have rarely been seen against al-Assad.

Syria's dependence on neighbouring Lebanon's banking system for access to financial networks and US dollars has been key in pushing Syria over the edge. Lebanon is in the throes of a parallel fall in the official value of the lira, a full-blown economic crisis, and worsening civil unrest that has pushed thousands of people onto the streets to demand change.

Analysts say the impending legislation may be a double-edged sword that might not just impact the al-Assad government and its local and foreign backers, but humanitarian efforts and civilians in Syria and Lebanon - whose collapsing economies are closely interlinked. "Lebanon will certainly be affected," said Turkmani. "Many Lebanese banks and institutions act as an alternative for the Syrian state and also many people."

Despite these concerns, analysts say Syria's imploding economy after years of war, mismanagement, and corruption was caused by the government, and civilians are likely to suffer the most from the new US sanctions. "The Assad government maintains control over the Syrian economy and its institutions, making it an incredibly difficult task to target it for its war crimes without affecting the people," said Ibrahim Olabi, a lawyer at the London-based Guernica 37 Chambers and founder of the Syrian Legal Development Programme. "It is critical that the US puts a huge effort in making sure it affects those who deserve to be affected," he warned, adding, "practically, this will not be an easy task due to lack of transparency in Syria and disinformation tactics adopted by the regime and its allies".