Can Climate Change Trigger Cooperation In the South Caucasus? 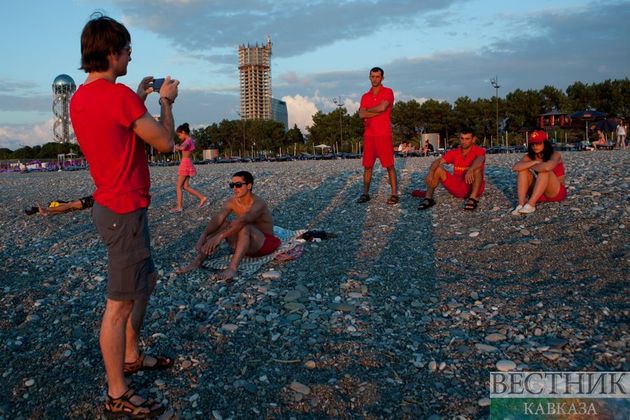 Climate change is affecting the entire South Caucasus region, which includes vast mountain ecosystems and remote coastal areas. The human security implications of climate change are likely to become more pronounced over time, Nika Chitadze. Director of the Center for International Studies, Professor of the International Black Sea University, writes in his article for Italian Institute for International Political Studies.

Several recent studies confirm that the average annual air temperature is steadily increasing. For example, according to the National Oceanic and Atmospheric Administration (NOAA)  2019 Global Climate Summary, the combined land and ocean temperature has increased at an average rate of 0.07°C per decade since 1880; however, the average rate of increase since 1981 (0.18°C) is more than twice as great. As a result, extreme weather events such as hurricanes and heat waves have intensified over the past decades. Georgia, Amenia and Azerbaijan are prone to a range of hazards such as landslides and floods, all of which are exacerbated by climate change and result in severe infrastructure damage, casualties, and economic losses.

At the political level, the countries of the South Caucasus are active participants in global climate change policy. All three states are Parties to the United Nations Framework Convention on Climate Change (UNFCCC) and support international efforts to keep the global average temperature rise below 2°C – a goal set at the Conference of the Parties in Paris in December 2015 within the framework of Paris Agreement. All three countries presented their climate commitments (INDCs) before the UNFCCC, setting specific emission reduction targets and pledging their commitment to implementing adaptation plans.

Armenia, Azerbaijan and Georgia have developed national security strategies. Although none of these states consider climate change to be a clear threat to national security, protection from natural and man-made disasters, as well as the implementation of rational environmental practices, are recognised as important factors in ensuring the safety of the population, and in a broader sense, national security. The Climate Commitments (INDCs) of Armenia and Georgia highlight climate change-related security threats in sectors such as agriculture. Across the region, there are concerns about food security, biodiversity loss and water vulnerability.

Several strategies and programs related to poverty, sustainable development, and renewable energy have been implemented, but few of them include measures to adapt to climate change, and in general, concern about climate change remains limited to those directly involved in environmental protection. For example, according to a 2021 Poll conducted by the Office of the National Democratic Institute in Georgia, the majority of Georgians are concerned about economic challenges (72%) and not environmental and other issues. The Georgian government is thus more focused on solving socio-economic problems. When planning other important economic activities in sectors such as energy, healthcare or tourism, despite some achievements in these areas, all three South Caucasus countries lack adequate measures to adapt to climate change.

Moreover, climate change is not taken into consideration for important technical and financial measures, such as building standards and insurance schemes, and adaptation planning does not sufficiently consider the impact of climate change on the most vulnerable populations, such as women. None of the South Caucasus countries have adopted climate change legislation to stimulate the implementation of adaptation measures.

Disruptions to the hydrological cycle caused by climate change can lead to tensions between upstream and downstream water users if their likelihood of occurring is disregarded in water management. A system of linkages between agriculture, energy, and water is critical, especially in coordinating sector action at the national level and between upstream and downstream countries. Currently, none of these three neighbouring countries has signed agreements on water use with the others, but significant progress has been made in the preparation of bilateral agreements.

The current situation is likely to be affected by political events. Georgia has ratified an Association Agreement with the EU, which requires cooperation on a range of sectoral policies, including measures to adapt to climate change. The Eurasian Economic Union (EAEU), of which Armenia is a member, primarily focuses its efforts on the economic integration of member states, providing a framework for common transport, agricultural and energy policies, but not necessarily directly targeting the cooperation aspects of these policies in the field of climate change. The economies of the South Caucasus countries remain fragile and, so far, climate change adaptation activities have been largely supported by external donors. A few measures have been taken at the state level in Azerbaijan, where the government has invested in flood prevention, rehabilitation and reforestation activities, but they are still only a handful of actions.

The security risks posed by climate change are of national and regional importance. At the local level, ongoing institutional and municipal reforms may provide opportunities for specific climate change adaptation measures to be put in place outside the capitals of the region, but progress is hampered by lack of coordination between central administrations and local municipalities, as well as lack of knowledge and resources to adapt to climate change. Based on the findings of recent research and consultation with national experts to assess areas of special concern for climate change and security, a number of areas were identified where climate change can disrupt socio-economic systems, threaten infrastructure or livelihoods, or compromise security, exacerbating political or social tensions.

Environmental problems in the South Caucasus are particularly acute in Georgia. For instance, one of the research exercises carried out by the Parliament of Georgia and partner organisations is a thematic survey on the air quality in Tbilisi. This revealed that despite numerous steps taken by the government, the problem of air pollution in the country remains acute and its damage to health is significant, suggesting the need for the development  and coordinated implementation of effective measures.

Studies have shown that Georgia ranks 50th in the world in the relative number of deaths attributable to air pollution. According to the data for 2018-2019, the average content of PM2.5 solid particles in Tbilisi exceeds the allowable norm by 15%, while the NOx content exceeds by 33-58%. However, it was revealed that the main cause of air pollution is vehicle emissions, as well as the abundance of older vehicles in the country.

At the same time, the steps taken to improve the environment in Georgia are noteworthy. In particular, as a result of the reforms, protected areas were expanded, and the area of protected territory increased by 288,539.5 ha in 2012-2019 and reached 697,250 ha in 2019. The forestry sector was reformed, and a new forest code was adopted. Unprecedented international financial support for Georgia for this important reform was provided by the Green Climate Fund (GCF), which allocated €33 million to the country.

To reduce air pollution, fuel quality has been controlled since 2017. A new European system for reducing air pollution from industrial facilities and emission control was developed, and the Parliament of Georgia adopted legislative amendments in two readings. The draft law on "Environmental Responsibility" was drafted in accordance with European requirements and adopted by the Parliament in three readings in March 2021.

In general, governments in the South Caucasus, from the local to the regional level, should take immediate action to cope with climate change impacts and their security implications. Some of the proposed areas of activity within environmental policy, including the programmes in the framework of the Environment and Security Initiative, suggest the need to strengthen cross-border cooperation as well as for more consistent and targeted international support. Ending the military conflict between Azerbaijan and Armenia and signing a ceasefire agreement, as well as devising some initiatives for the possible development of economic cooperation between the two countries can lay the foundations for cooperation on environmental protection issues among the three South Caucasus countries in the future. Georgia, which has good relations and close ties with both Armenia and Azerbaijan, has the potential to mediate between the two countries to achieve greater regional environmentalism. For example, Georgia could host a regional forum on environmental issues with the participation of the representatives of governmental and non-governmental sectors of Armenia, Azerbaijan and Georgia (with the possible involvement of foreign experts) to consider and develop appropriate recommendations to improve the environmental conditions of the South Caucasus. The EU could also play a proactive role, as environmental aspects are among the spheres of cooperation of the EU Eastern Partnership Programme, which includes all the three South Caucasus countries.

Nobody eager to solve ecology problems caused by military