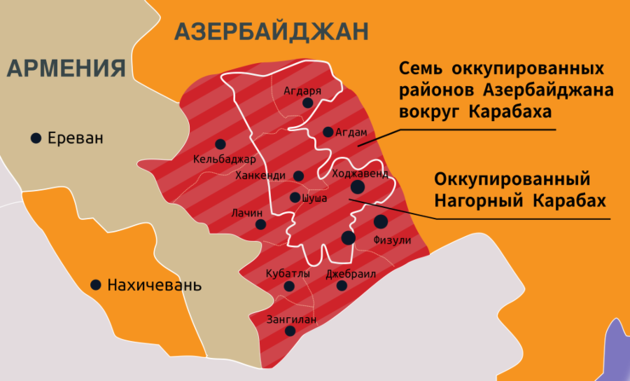 Now, when the world is immersed in an enduring coronavirus crisis, it will be quite difficult for Armenia to carry this additional burden, writes Dr Gulshan Pashayeva, the Board member of the Center of Analysis of International Relations of the Republic of Azerbaijan in the article Can the coronavirus crisis impact on Nagorno-Karabakh conflict resolution? Two years she wrote the article “No headway on Nagorno-Karabakh: Cui bono?”.  Since then, a number of serious developments have taken place in Armenia and Azerbaijan.

Right now, Serzh Sargsyan is no longer the President of Armenia. He was forced to resign following large-scale protests after attempting to become the Prime Minister in April 2018. Subsequently, Nikol Pashinyan took office as the new Prime Minister of Armenia. Azerbaijan has also undertaken a number of structural, economic and cadre reforms the aim of which has been to further improve the governance mechanism, to reduce dependence on energy exports, to encourage private investments and to bring young and bright professionals to the important senior positions. As a result of this policy, a number of economically minded technocrats including the new Prime Minister Ali Asadov recently came to power in Azerbaijan.

The snap parliamentary elections held in Armenia on 8 December 2018 and in Azerbaijan on 9 February 2020 can also be viewed as an indicator of change in both countries. However, no progress has been achieved in the decades-long Nagorno-Karabakh talks.

Due to the armed Nagorno-Karabakh conflict, currently close to one-fifth of Azerbaijan’s internationally recognized territory is outside of the government control. This breakaway region, so-called “Nagorno-Karabakh Republic” (“NKR”) includes the most territory of the former Soviet Nagorno-Karabakh Autonomous Oblast (NKAO) and seven other adjacent Azerbaijani districts which were seized by the Armenian forces in the early 1990s. It has now mono-ethnic nature due to the expulsion of all the Azerbaijani inhabitants of both NKAO and seven adjacent districts during the occupation.

This unrecognized entity has existed in a kind of limbo with the financial support of Armenian diaspora and under the overall protection of Armenia for almost 30 years. Despite continuous efforts of these two actors to use the current status quo to impose finally a fait-accompli-based solution, it has not received any international recognition so far.

Now, when the world is immersed in an enduring coronavirus crisis, it will be quite difficult for Armenia to carry this additional burden due to the shocks the economies and the social welfare systems of the states face globally.

At present national governments have been trying to mobilize resources in order to stop the spread of COVID-19, to protect public’s health and to alleviate the impact of economic crisis. Various measures such as full lockdowns, travel restrictions, border closures, social distancing, social and economic stimulus packages etc. have been set up to handle the adverse effects of the coronavirus pandemic worldwide. Besides, many important political, cultural, religious, sportive and other events such as the 36th ASEAN Summit, the 2020 Bolivian general election, the 2020 Democratic National Convention, the 2020 Italian constitutional referendum, the Cannes International Film Festival, the Eurovision Song Contest, Christian Holy Week events in Rome, the 2020 Summer Olympics in Tokyo, the 2020 UEFA European Football Championship, several Formula 1 races, etc. are being canceled or postponed to prevent the spread of COVID-19.

However, Armenia has been trying to deal with this pandemic in its own way.

Suffice it to say that the coronavirus has hurt the Armenian economy and contributed to decline of its GDP growth. According to the former Economy Minister Vahram Avanesyan Armenia may lose 15% of GDP during the coronavirus crisis. A sharp decline in tourism sector, a decrease of copper prices, a drop in remittances sent from Russia and a decline in Armenian exports in its key market in Russia are currently the multiple negative trends facing today’s Armenia. In addition, the closure of passengers’ flow at the only two functioning land borders with Georgia and Iran and complications for freight transportation might negatively impact Armenia. Thus, Armenia cannot avoid an economic slowdown.

At the same time after the identification of the first case of COVID-19 on  1March, the Armenian government closed educational institutions for one week and re-opened them again on 9 March due to the lack of confirmed new cases. But when the situation changed shortly, one-month nationwide state of emergency was declared in Armenia on 16 March and on 13 April it was extended to 14 May. The 2020 Armenian Constitutional referendum was also postponed on 16 March, because the organization of mass events during the state of emergency is prohibited in Armenia. The nationwide lockdown was also imposed on 24 March. As of 20 April, 1,339 persons tested positive in Armenia, 22 deaths were registered, while 580 persons recovered.

However, the Armenian government did not postpone the so called “presidential and parliamentary elections” in “NKR” which was held on 31 March. In order to bring new leadership and to legitimize the so called regime as well as to portray these “elections” as “democratic” Armenia has ignored sound judgment and has supported holding this event on time. As a result, around 1,000 observers and journalists from Armenia attended it despite the nationwide lockdown enacted in Armenia. This irrevocably led to certain consequences.

In this context the remarks made by the Assistant to the President of the Republic of Azerbaijan, Head of the Department of Foreign Policy Affairs of the Presidential Administration Hikmat Hajiyev in regard to these “election” are on-target. According to him “the insidious essence of the illegal regime created by Armenia in the occupied territories of Azerbaijan is manifested in the fact that while the whole world is suffering from coronavirus, they continue their dirty political games”.

It was also declared that these “elections” constitute a violation of the sovereignty and territorial integrity of Azerbaijan and undermine overall international efforts, including by the OSCE Minsk Group, the only entitled format that conduct a mediation to achieve a peaceful settlement of the Nagorno-Karabakh conflict.

The EU also expressed its firm support to the OSCE Minsk Group Co-Chairs’ efforts “to bring about progress beyond the status quo and substantive negotiations towards comprehensive and sustainable peace”.

Thus, the international community fully recognizes and support sovereignty, territorial integrity and inviolability of the internationally recognized borders of Azerbaijan and strongly condemns holding these “elections” in the occupied territories of Azerbaijan. However, “the condemnation of these illegal actions is not enough; acting according to these statements, or with other words realization of the resolutions adopted by international organizations with regard to the Armenia-Azerbaijan Nagorno-Karabakh conflict is essential. This is what Azerbaijan is striving for and this is what needed to provide lasting peace, security and stability in the region” said Minister of Foreign Affairs of Azerbaijan Elmar Mammadyarov in his interview to “The London Post”.

Without doubts, the current coronavirus pandemic has certain impact on the conflict resolution processes around the ongoing Nagorno-Karabakh peace process.

Firstly, various preventive measures undertaken by the states to stop the spread of COVID-19 may create certain obstacles to organize face-to-face meetings under the auspices of the OSCE Minsk Group, which may lead to a certain interruption in the negotiation process in the future.

Secondly, the monitoring exercises which are regularly conducted across the Line of Contact between the Armenian and Azerbaijani armed forces are now suspended due to coronavirus pandemic. Therefore, the conflicting parties themselves are currently in charge of maintaining the ceasefire regime.

In this context the UN Secretary-General António Guterres’s “Appeal for Global Ceasefire” in the face of the COVID-19 pandemic is quite noteworthy. Underlining that this virus does not care about nationality, ethnicity, faction and faith, the UN Secretary-General calls for an immediate global ceasefire in all corners of the world by putting armed conflict on lockdown and opening precious windows for diplomacy. However, despite of the above-mentioned Appeal from April 2020, the Armed Forces of the Republic of Armenia use high-calibre machine guns against the civilian residents of the Gazakh region of Azerbaijan near the frontline as was indicated in the statement of Azerbaijani Community of Nagorno-Karabakh circulated as UN General Assembly and Security Council documents.

Unfortunately such actions put in danger not only the ceasefire regime, but also threaten the fight against the coronavirus pandemic today. Finally, the changing external and internal circumstances related to coronavirus pandemic might also provide an enabling environment for the reassessment of positions and conflict narratives of conflicting parties and allow the current status quo to turn into hurting stalemate. However, it seems quite elusive today.