Caucasian stability and cooperation platform can be implemented

Today Moscow will host the first meeting of the Russian-Turkish commission on Syria. A spokesman for the Turkish President, Ibrahim Kalin, said at yesterday's meeting in St. Petersburg that the presidents of Russia and Turkey instructed to create a mechanism comprising of committees with representatives of the intelligence, military and diplomatic services from each side. "The Syrian issue was one of the key items on the agenda, but the problem is that it is difficult to assess the degree of trust, as well as working mechanisms. There was a link between the General Staffs prior to the downed aircraft, but it did not work. Therefore, we almost cannot talk about the effectiveness of the mechanisms established in Syria," a senior scientist at the Institute of Oriental Studies of the Russian Academy of Sciences, Stanislav Pritchin, believes.

He believes that the implementation of economic projects, first and foremost the Turkish Stream project, is more realistic. It is beneficial for Gazprom to implement this project, but there is a problem, because one branch allows Turkey to be supplied with Russian gas, but it doesn't allow to recoup at least partially the investments which have already been made in the South Stream. Alexey Miller acknowledged that 4.5 billion euros have been invested in Russian infrastructure – to construct a pipeline in Anapa and to buy pipes, which are now virtually written off from the balance sheet. Gazprom is interested in launching at least one branch. But in order to recoup the investment it is necessary to create opportunities for further transit to the southern countries of the European Union through Turkey.

Stanislav Pritchin focused on Gazprom's plans to exclude Ukraine from supplying gas after 2019, when the transit contract will expire. "Recep Tayyip Erdogan said that there is the TANAP, which is being built. In this context, the meeting in Baku [between the leaders of Russia, Azerbaijan and Iran] is interesting. This is a meeting of three suppliers of hydrocarbons to the EU – current and potential. The three countries will compete for the southern market of the European Union, but excessive competition will play into the EU's hand, which is holding a balanced, long-thought-out policy of uniform conditions for all suppliers. Now we see that the three key suppliers are beginning a dialogue with each other. This is not a cartel, but a a harmonization of some conditions of deliveries to avoid competition," the expert believes.

According to him, the fact that Erdogan speaks about TANAP in the context of Turkish Stream suggests that the prospects for a new structure of energy supply to the European Union are being discussed. 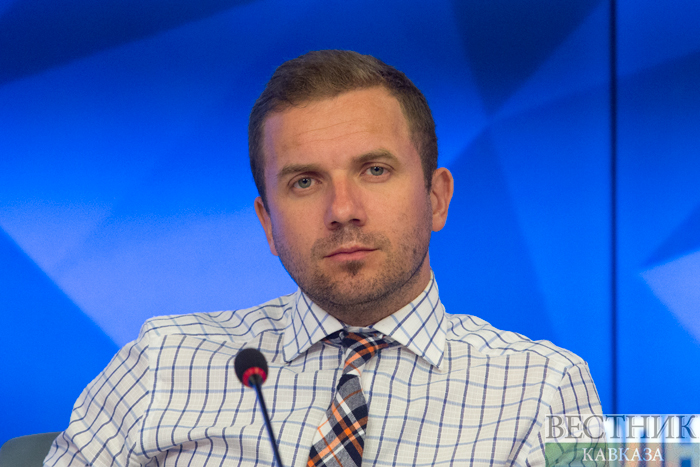 Recall that in the midst of the five-day war in South Ossetia, Recep Tayyip Erdogan, who was the Turkish prime minister back then, initiated the establishment of a new interstate union, which could include Armenia, Georgia, Azerbaijan, Russia and Turkey. The initiators of the Union have proposed a name – 'The Caucasian Stability and Cooperation Platform'.

"We cannot say that there is a return to the idea of ​​the Caucasian platform, which was proposed five years ago, but Vladimir Putin's active and sustained talks [with Ilham Aliyev and Hassan Rouhani in Baku, with Recep Tayyip Erdogan in St. Petersburg and Serzh Sargsyan in Moscow] shows that the creation of such kinds of interaction formats between the Caucasus states with the involvement of all three major external players – Russia, Turkey and Iran – is possible. There is an active dialogue in a variety of formats, with the designation of the hottest spots, including Nagorno-Karabakh. This is a positive signal. Early August was a very interesting and dynamic stage in the development of the situation in the region," Pritchin believes.