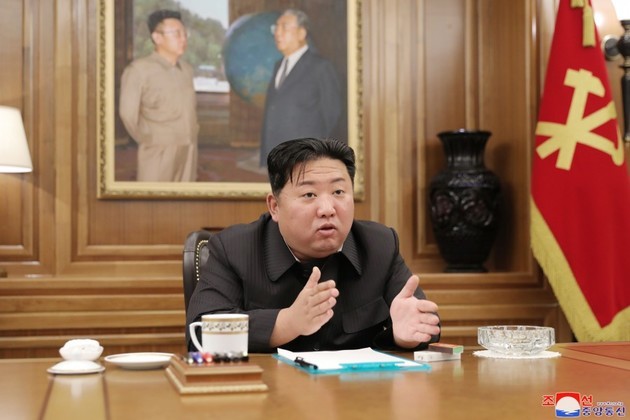 North Korea says it has been compelled to bolster its defenses against U.S. moves to create an "Asian version of NATO" in a statement that echoed similar attempts by China to rebuild the postwar alliance system in the region. According to Newsweek, Pyongyang accused Washington of frequent military deployments in its "surrounding region" and singled out its respective joint exercises with treaty allies Seoul and Tokyo as evidence of increased hostility to the North's regime.

The U.S. was "embarking on a full-scale move to create an 'Asian NATO' by frequently staging joint military drills with Japan and South Korea," its Foreign Ministry said on Sunday. This month's naval drills with the South involved a U.S. Navy aircraft carrier for the first time in more than four years.

"It also brings deep to our hearts the need to leave no stone unturned in bolstering up our strength which can overpower any hostile act of the U.S.," said the North as it vowed to "confront the U.S. with the principle of power for power and head-on contest."

The South's President Yoon Suk-yeol looks to be aligning his country's defense policies closer with those of President Joe Biden when it comes to jointly deterring the North, which has conducted frequent missile tests in recent months.

U.S. officials had already warned that a nuclear test by Pyongyang—what would be its first in five years—was likely during or after Biden visits to Seoul and Tokyo in May. American offers to hold talks with the North about dismantling its nuclear weapons program have so far been rebuffed, leading Deputy Secretary of State Wendy Sherman earlier this month to commit to a "swift and forceful response" to a resumption of nuclear testing.

The North took issue with Sherman's comments, noting they undermined the credibility of U.S. messaging about diplomatic engagement with Kim Jong-un's government. "These reckless remarks sound to us [like] nothing more than a scream of the U.S. which was shocked and terrified at the tremendous power of our country which is gaining in strength day by day."

"At the same time, it lays bare once again the unchanged ambition of the U.S. to overturn our system by force," Pyongyang said, hinting once again at its suspicion that the U.S. is seeking regime change.

Yesterday, the North's Foreign Ministry published another statement accusing the U.S. of fueling tensions in the wider region and on the Korean Peninsula with its basing agreements. "In particular, the U.S. military bases deployed in Japan and South Korea are serving as a major factor in placing the region of Northeast Asia under constant military tension. This has turned the Korean Peninsula into the hottest spot of the world," it said.

North Korea and Iran: the military alliance that America fears