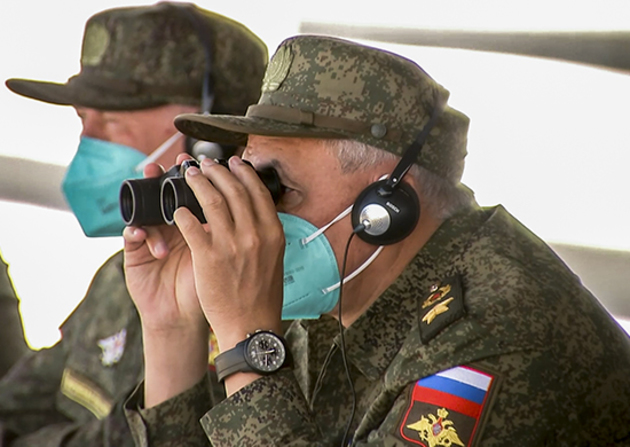 The exercise ZAPAD/INTERACTION-2021 is underway at the Qingtongxia Combined Arms Tactical Training Base in Northwest China's Ningxia Hui Autonomous Region. This is the first time that the Russian army or even a foreign army is invited by China to participate in the PLA's strategic exercise in China. As Global Times writes, it is also the first time that Russian servicemen used main battle weapons and equipment provided by the Chinese military on a large scale. It is also a joint drill aimed at maintaining regional security by neighboring countries when the situation in South Asia changed greatly.

China and Russia are not allies, so they won't ask the other to abide by any binding obligations or coerce the other to serve their own strategic objectives. But their relations go beyond an alliance and their cooperation level exceeds that of many allies. Their mutual trust is unprecedentedly high. It shows that as long as two countries fully understand and communicate with each other and trust each other's strategic intentions, they can build a solid partnership and they don't need an alliance treaty and form cliques by making common enemies.

Although the joint exercise was pre-arranged, it echoes the timetable of the US withdrawal from Afghanistan. The two-decades-long war of the US leaves a torn and uncertain Afghanistan in the Eurasian continent. As US troops withdraw, the Taliban have launched major offensives and seized a number of provincial capitals in key areas. The worsening security situation in Afghanistan not only makes the Afghan-led and Afghan-owned peace process hard to achieve, but also leaves room for international terrorist forces to expand in Afghanistan. Afghanistan may once again become the center where extreme forces threaten regional and global security.

The northern Caucasus region of Russia has long extricated itself from terror forces. The Xinjiang Uygur Autonomous Region of China is one of the safest places in the world. These achievements are a result of joint efforts of the military and police departments as well as local and central governments of China and Russia. The two countries will not allow any external force to jeopardize their national security. The security and stability of the core areas of the Eurasian continent concerns the common strategic interests of China and Russia and they shoulder major power responsibility to maintain it.

The situation in Afghanistan is at a critical juncture. The China-Russia joint exercise serves as a powerful deterrence to the restless international terror groups and showcases the responsibility of the two major military powers.

Amid the winds of change in international politics, certain countries attempt to bring the international landscape back to the Cold War state. They even go against the trend of history by hyping a new cold war between the Western world and China, Russia to consolidate their hegemonic status.

In the face of such international countercurrents, the development of the comprehensive strategic partnership of coordination between China and Russia in a new era carries decisive weight to ensure the right track of the evolution of the global pattern.

The China-Russia joint drills in Qingtongxia will be noticed by countries in all regions including the Atlantic, the Mediterranean Sea, the Pacific and the South China Sea. It will remind countries which are trying to fan confrontation and hatred by making use of the pandemic - they shouldn't have the illusion that they will pay nothing for simultaneously provoking the two major military powers and can build strategic advantages against the backdrop of the ravaging pandemic.

The ability of China and Russia and their militaries to cope with the pandemic is much better than that of the various "alliances." It is known that large-scale infections occurred after the military exercises between NATO countries, but it will not happen in Qingtongxia.

If certain countries conceive a new iron curtain from the Atlantic to the Pacific via the Indian Ocean, the sound of artillery from Qingtongxia is the best answer to such plots.