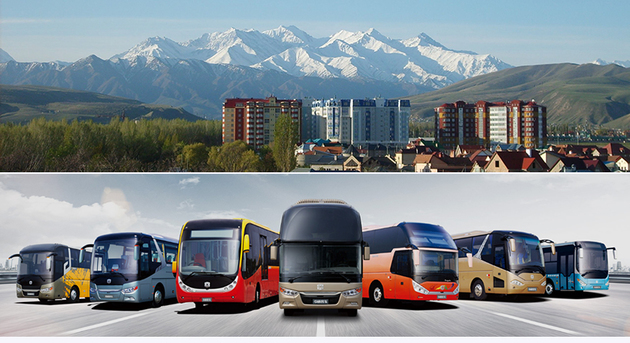 Kyrgyzstan's capital Bishkek is set to welcome a new fleet of gas-powered buses from China in the near future, cementing Beijing’s position in a public transport sector. Chinese buses have survived corruption scandals to become the most obvious alternative to ubiquitous but problematic minibuses. City authorities said this month that 20 of the 120 buses Bishkek had purchased have arrived in Bishkek and the remainder are expected in the near future, Eurasianet writes.

Bishkek’s public transport sector is a source of never-ending complaints. For the moment, there are not enough buses and trolleybuses to go around and smaller marshrutki, or minibuses, dominate the roads. These vehicles, typically Mercedes Sprinters of venerable age, are seen as major contributors to Bishkek’s traffic and bad air. Each winter, the Kyrgyz capital stands among the most polluted cities in the world. Officials are also leery of the minibus drivers, because nothing good can be expected from them in the event of strikes.

Chinese buses have been seen as part of the solution since the time of Kyrgyzstan’s second president, Kurmanbek Bakiyev, more than a decade ago. In 2008 and 2009 Beijing donated scores of buses to Kyrgyzstan. But there were no more deliveries after it. The delivery of another clump of Chinese buses during the same era would become part of a corruption case against former mayor Nariman Tyuleyev, who was sentenced to 11 years in jail in 2013 – three years after the Bakiyevs were overthrown. These buses, manufactured by Chinese giant Yutong, had a mixed reputation, with many falling short in the longevity stakes. Reporters visiting the site of Bishkek’s “bus graveyard” in 2016 heard complaints from municipal officials that the broken down buses could not be serviced as the line was no longer in production in China.

The new buses are the result of a billion som ($11.7 million) contract directly concluded with Zhongtong Bus Holding Company. Two previous attempts to award the contract via open tender ended in the tenders being canceled and a criminal case launched against city officials.

Like another batch of 60 buses Bishkek bought from Yutong four years ago, Zhongtong’s buses will run on compressed natural gas, rather than diesel.

Although not as clean as the electric battery buses now preferred in many developed countries, tailpipe emissions for CNG buses are less than those of their diesel-powered equivalents. This is important in Bishkek, where people are increasingly irate about PM 2.5 (particulate matter) air quality measurements.

City Hall claimed back in 2019 that the switch to CNG-powered buses would result in savings of more than 50 percent on fuel.

As the U.S. Department of Energy noted in a myth-busting paper on CNG buses at the turn of the millennium, their contribution to greenhouse gases is broadly similar to diesel-powered competitors once CNG’s upstream production is taken into account. Most importantly for Bishkek’s cash-strapped decision-makers, both Chinese vehicles, and CNG are keenly priced. Municipal authorities have also in the past acknowledged that negotiations for buses produced in countries other than China, such as Turkey and Russia, collapsed due to the higher costs quoted by manufacturers.

Kyrgyzstan to host CIS summit in 2023