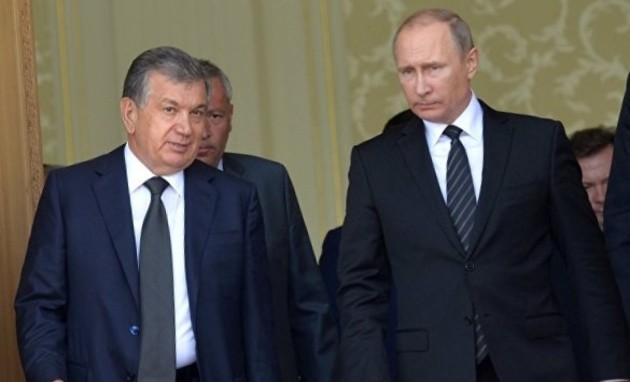 President of Uzbekistan Shavkat Mirziyoyev will attend the Victory Parade in Moscow on June 24. A group of Uzbek troops will join the parade on Red Square as well. The Uzbek leader will discuss the most important issues of bilateral relations with Russian President Vladimir Putin, as well as the date of the state visit postponed due to the coronavirus pandemic.

Out of the 6.5 million people living in Uzbekistan in 1941, about two million took part in the Great Patriotic War, President Shavkat Mirziyoyev recalled, addressing the citizens on May 9, 2020. "This means that every third Uzbek has joined the fight against fascism with weapons in their hands. 538 thousand of our compatriots were killed in battles," the Uzbek president said. More than 158 thousand people went missing.

The new Victory Park was built in Tashkent in honor of the 75th anniversary of the end of the war, including the Ode of Fortitude memorial complex in memory of Zulfiya Zokirova, an Uzbek woman who lost five sons in the war, the Arch and the sculptural composition crowned by the statue of a hero of the Soviet Union, Major General Sobir Rakhimov. In addition to the Museum of Glory, the park has libraries, Wi-Fi zones, and stage venues. "This park reflects the contribution of our people to the Great Victory, perpetuates the heroism of our fathers and grandfathers in the fight against fascism, being a testament to our great respect for their unprecedented courage and bravery," Mirziyoyev said at the opening of the park.

In Moscow, he will attend the military parade on the Red Square in Moscow, as well as the ceremony of laying flowers at the Tomb of the Unknown Soldier near the Kremlin wall.

This year the President of Uzbekistan expected to visit Russia, however, due to the coronavirus pandemic, the state visit was postponed to a later date.

As for the Russian-Uzbek cooperation agenda, it can't be discussed on the move. Moreover, it was planned to sign a declaration on a comprehensive strategic partnership between Uzbekistan and Russia.

"At the end of 2019, Russia was second among the key trade partners of Uzbekistan: Russia's share in the republic's foreign trade turnover amounted to 15.7%. Uzbekistan significantly increased the supply of its textile, food and other products to various regions of Russia. Specialists in nuclear energy began preparatory work on the construction of the first nuclear power plant of Central Asia in the Jizzakh region of Uzbekistan, the project cost is estimated at 11 billion rubles," researcher at the Institute of Oriental Studies, Russian Academy of Sciences Alexander Vorobyov told Vestnik Kavkaza.

According to the expert, for Russia, the development of relations with Uzbekistan means strengthening its own positions in Central Asia and expanding the markets for its own non-primary products. For Uzbekistan, a significant role is played by the need to attract investment in its economy, develop industrial cooperation and increase its economic presence in the capacious Russian market. Moreover, Uzbekistan became an observer state to the Eurasian Economic Union.

In the military sphere, Uzbekistan and Russia have an agreement on military-technical cooperation, signed in April 2017, under which Tashkent is engaged in an active dialogue with Moscow, purchasing weapons and military equipment, the cooperation between specialized defense departments has been established and is constantly being strengthened. In 2018, a significant intergovernmental agreement was signed on the mutual use of the airspace by military aircraft on the territory of Russia and Uzbekistan. These agreements determine the basic format of military and military-technical cooperation between the two countries.

Cooperation between Uzbekistan and Russia in the military and military-technical sphere should be strengthened, because both traditional and non-traditional security threats in the Central Asian region and the macro-region of Greater Eurasia have remained," director of the Center for Research Initiatives 'Ma'no' Bakhtiyor Ergashev believes. In this context, the situation in Afghanistan shows that there's no trend towards stabilization, even despite the recently signed Doha agreement between the Taliban and the United States. "The domestic political situation in Afghanistan remains difficult, and cooperation between Uzbekistan and Russia in the joint fight against threats coming from there is one of the most important factors to intensify cooperation in the military and military-technical sphere," Ergashev told Vestnik Kavkaza.