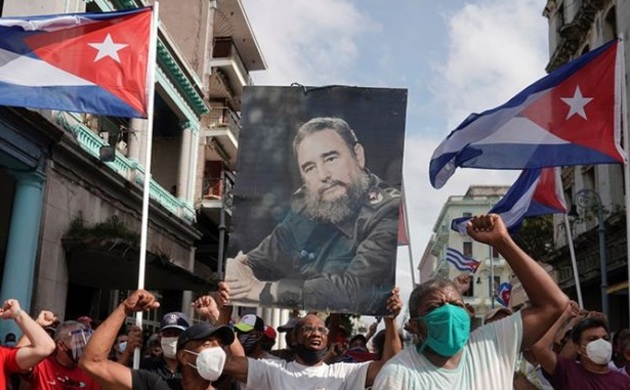 This week Cuba declared a state of emergency in the country amid massive protests calling for free elections and more decisive action to combat the COVID-19 pandemic. Pandemic devastated tourism industry and cut state’s ability to finance food imports, leading to higher prices.

Cuba’s communist revolution is one of the world’s great survivors. The Soviet Union may have crumbled, the Berlin Wall fallen and China and Vietnam turned to a form of capitalism, but Havana still stands as a lonely outpost of Marxist central planning. Only North Korea can rival it for longevity and unreformed socialism, Financial Times writes.

So when thousands of Cubans took to the streets in apparently spontaneous, uncoordinated protests lacking visible leaders last Sunday calling for freedom and demanding action over dire shortages of food and medicine, a shockwave rippled across the Caribbean island. Public dissent is forbidden yet these were the largest protests in decades, probably the biggest since Fidel Castro and his revolutionaries seized power in 1959.

Protesters in different cities overturned a police car, broke the windows of a hard currency store to loot scarce goods inside, gathered outside the National Capitol building in Havana to shout anti-government slogans and fought with plainclothes police, according to videos shot at the time. Some shouted the words “patria y vida” (“fatherland and life”), echoing a protest song released by Miami-based Cubans in February.

Across the Florida straits, Miami’s excitable Cuban-American community rejoiced: this looked like the moment they had long awaited, when ever tighter US sanctions would finally strangle Cuba’s economy, prompting the population to rise up and overthrow communism. Some exiles called for a flotilla to invade the island and Miami mayor Francis Suarez even suggested air strikes on Havana, home to 2m people.

The communist government is facing a major challenge to its authority for the first time without a Castro in charge. Fidel personally confronted demonstrators on the capital’s Malecón seafront boulevard in the last major protest in 1994, but he died in 2016 after a long illness. His brother Raúl retired as de facto ruler in April and in June turned 90. It fell to Miguel Díaz-Canel, a party bureaucrat lacking any revolutionary pedigree, to respond.

“The Castros epoch has ended,” says Carlos Malamud, senior Latin America researcher at the Royal Elcano Institute in Madrid. “There is no clear direction this will go. The opposition is divided, fragmented and very penetrated by the security services . . . we will see in the next few weeks what the opposition’s ability to mobilise is.”

Cuba’s government may not be able to guarantee food supplies but it has mastered the art of control. Special forces and police flooded the streets and within hours the protesters had dispersed, mostly without confrontation. Internet connections were cut across the island, preventing dissidents from organising. For the rest of the week, the streets stayed mostly quiet.

Juan Pappier, lead Cuba researcher at Human Rights Watch, says more than 200 people have been detained since Sunday, though he says this is a conservative estimate. The government, he says, exercises “the maximum repression possible with the least visibility and they go to great lengths to prevent bloodshed”. The authorities said that one person died in the protests.

‘Our president is no use’

José, 50, says he will always be a supporter of Fidel Castro but he is hungry. He earns 2,600 pesos a month — about $100 at the official exchange rate — as a security guard at a state-owned company in Havana. “I don’t understand why we have a president who wasn’t in the revolution,” he adds, speaking on condition his real name is not used. “Fidel really had balls. In 1994 when there was a much smaller uprising . . . Fidel arrived to speak to the people. That’s what I call a real president, he loved us. This one we have now is no use, he’s had a plane crash [which killed 112 people in 2018], a hurricane, Trump and currency changes which nobody understands.”

Shortages lie at the heart of the protests. Cuba’s inefficient state-controlled farming sector has never produced enough to feed the 11m population, forcing the authorities to use ever-scarcer hard currency to import staples. Díaz-Canel admitted in a recent speech that food imports now stood at just a quarter of 2019 levels.

In state-run shops, the shelves sometimes have only one product in stock, such as floor cloths or bottles of mineral water, and ration books must be used to buy food. Prices in hard currency stores are out of reach for most Cubans, so the black market is thriving.  Cubans are taking scarce flights to Florida and Latin America to bring back as much as they can for lucrative resale. In a tacit recognition of the importance of these “mules” in relieving shortages, Cuba this week lifted limits on the duty-free personal import of food, medicines and hygiene products.

Tourism, a big export earner and source of dollars, has been devastated by the pandemic. Cuba received just over 88,000 visitors between January and May this year, according to the government, just 9 per cent of the same period last year.

The public health system, long a source of pride, lacks medicines and equipment. The authorities controlled the pandemic well last year but, desperate for hard currency, reopened tourism from Russia this year. Infections rocketed and Cuba now has more new Covid cases per capita than any major Latin American nation.

Remittances have been restricted since the Trump administration imposed sanctions on the Cuban military-run agency handling payments. In 2020, Cuba’s inflows of foreign exchange fell around a quarter, according to Díaz-Canel, and they declined again this year. According to official figures, gross domestic product shrank by 10.9 per cent last year and another 2 per cent in the first half of 2021.

Making matters worse, Díaz-Canel implemented economic reforms at the start of 2021, devaluing the peso from parity with the dollar to 24; it has since sunk to 60 on the black market. Inflation has soared — economists estimate prices are rising 500 per cent a year.

In the days after the protests, Díaz-Canel softened his tone. On Wednesday, he acknowledged that the demonstrators had some legitimate concerns, though he continued to pin most of the blame on the US. In another televised appearance, he and his cabinet explained in great detail efforts to keep the lights on and to pay for cargoes of food.

But the president has little to offer until more people are vaccinated and tourism resumes. Cuba is not a member of the IMF or World Bank, leaving allies Russia, China and Venezuela as potential sources of support. Venezuela’s socialist regime is near bankrupt, while Moscow and Beijing are reluctant to bail out a serial bad debtor yet again.

“Before the winter season no major pick-up of tourism can be expected,” says Bert Hoffman, a Latin America expert at the German Institute of Global and Area Studies in Hamburg. “So if for the next months the state has no better ability to import food and other goods and no rapid increase in domestic production, it is likely that severe shortages will persist.” Economists argue that Díaz-Canel should do more to support private businesses, which still lack legal status. “The government needs to open up every opportunity possible to the private sector,” says Cuban economist Omar Everleny Pérez Villanueva a former University of Havana professor.

But if the Cuban government has few good options, experts say the same is true of the US administration, which is already battling multiple international crises, including the July 7 assassination of the president of Haiti, Cuba’s Caribbean neighbour.

President Joe Biden has surprised some Cuba-watchers by keeping in place tighter Trump-era embargo restrictions on the island and criticising Havana harshly. On Thursday, he called Cuba a “failed state” which was repressing its citizens and denounced communism as a “universally failed system”.

Vulnerable to Republican attacks over a surge in migration, the last thing the Biden administration wants is a repeat of the 1990s, when Fidel Castro allowed more than 35,000 “rafters” to leave on makeshift boats for the US. In a hint that such a policy could be repeated, Cuba’s foreign minister Bruno Rodriguez said Washington risked “incitement of irregular and disorderly migratory flows”.

Both Havana and Washington were limited in their ability to respond to the protests.

The Russian Foreign Ministry also expressed its indignation at the American policy towards the "island of freedom".  ”The American side at all levels, including the official announcement made at the State Department briefing on July 13, presents the events that took place in Cuba as a consequence of the government's mistakes. Washington's particular cynicism is that throughout the entire period of the existence of revolutionary Cuba, it has purposefully pursued a strategy of strangling the country, discrimination of its people and destruction of the economy. 60 years of the financial and economic blockade of the republic, the Helms-Burton act was elevated to the rank of national legislation with the extraterritorial application of harsh restrictions? How to deal with the endless and absolutely illegal sanctions policy, spreading on the most essential consumer goods, including food and medicine? How should we assess the purely politically motivated, but persistently repeated inclusion of Cuba in certain national terrorist lists that hinder the republic's full integration into the world political processes?

At the same time, all the discriminatory measures noted by Washington are being applied and even intensified in the context of a global epidemiological disaster that requires reconciliation and cohesion of efforts. The United States talks about humanitarian needs, but in the name of its own narrowly egoistic interests, it escalates tension and confrontation. The logic here is simple. It has already been repeatedly tested by Washington in different situations, but all in one and the same angle - the inspiration of "colour revolutions" in relation to unwanted regimes. First, sanctions are imposed on them, artificial problems are created or introduced from the outside that aggravates the socio-economic situation. On this basis, tension is provoked, anti-government sentiment is kindled. And when the "critical mass" accumulates, all the blame is placed on the national government. Labels are hung on it, its activities are discredited in every possible way, and thus the situation is brought to a pulling down.

The same algorithm is now being applied to Cuba. Despite all the measures taken by the central Cuban authorities to support the country's economy and provide assistance to the population, it is they who are accused by Washington of the current crisis situation. Allegedly, Havana itself refuses to accept American assistance, does not want to participate in international mechanisms for the distribution of vaccines and is pursuing an anti-popular policy in general.

At the same time, the Americans, as always, keep silent about their own subversive actions and opportunistic aspirations. Without drawing any parallels, I would like to remind our American colleagues of recent events in their own domestic political life. Where were their concerns about humanitarian values, political pluralism and democratic freedoms, when participants in the "storming of the Capitol" on January 6  were caught across America, accused of "internal terrorism" and criminal liability?

Washington's actions towards Cuba are yet another political staging, an example of the practice of "double standards" deeply rooted by the Americans. With the selective application of legal norms. With a tendentious and differentiated interpretation of the same or similar events,” a spokeswoman for the Russian Foreign Ministry, Maria Zakharova said.

Russia's Mir cards to start working in Cuba in 2022

China displaces US from Latin America

Maduro is sending message to US from Turkey