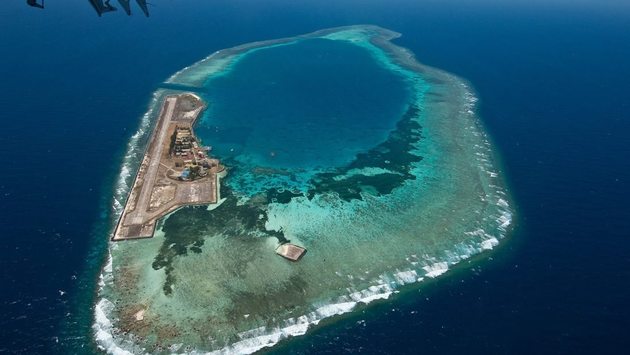 The US-China trade war nears third year, and now experts fear that if political tensions escalate during the US election campaign, the US Armed Forces could provoke a conflict in the South China Sea. Eurasia Review writes that China has deployed warships and sent fighter jets on a long-haul flight to bases it occupies in the disputed Spratly island chain, according to satellite imagery and state media, in the latest show of Chinese military strength in the South China Sea.

That comes ahead of a major, multi-nation military exercise led by the United States planned for Aug. 17 to 31 near Hawaii which will be attended by nations across the Indo-Pacific. A Philippine naval ship has already set sail for the Rim of the Pacific (RIMPAC) drills. Other nations expected to attend include Vietnam, Australia, Brunei, Singapore, Japan, Malaysia and Indonesia.

Advanced fighter jets with China’s Southern Theater Command flew to the Chinese-occupied base at Subi Reef within the past week, according to Chinese state media. A Hunan province-based Chinese state-owned broadcaster aired a documentary about the People’s Liberation Army Air Force (PLAAF) brigade involved in that drill over the weekend. In the video, four Su-30MKK fighter jets reportedly perform a mid-air refueling while on a 10-hour flight to Subi Reef, with the brigade’s commander noting this breaks the PLAAF’s previous record for long-range flights and demonstrates China’s ability to send any aircraft as far as the Spratlys at a moment’s notice.

However, experts at the China Aerospace Studies Institute (CASI) – part of the U.S. Air Force-affiliated Air University – pointed out it takes less than 10 hours to fly directly to Subi from Changsha, the brigade’s likely home base in Hunan. “Assuming the video is showing the actual event, they appear to be departing and arriving from Changsha,” Brendan Mulvaney, director of CASI, said after seeing the video report and conferring with colleagues. “The math on a 10-hour trip doesn’t make sense. It’s about 1,300 miles from Changsha to the Spratlys, which should only take two to three hours at typical cruise speeds. At 10 hours round trip, that implies they’re flying at 260 mph which is unlikely,” he said.

Instead of testing the endurance of the aircraft itself or the feasibility of the trip, experts surmised the exercise was likely aimed at testing the physical fitness of the pilots under the conditions of a grueling long-distance flight. “The Su-30MKK is physically capable of sustaining 10-hour flights with mid-air refueling,” Mulvaney said. “The question is whether a pilot is physically capable of doing so.”

Subi Reef is one of China’s four biggest artificial islands in the Spratlys, an archipelago of rocks and reefs in the southern half of the South China Sea that Vietnam, China, Taiwan, the Philippines, Malaysia, and Brunei all hold claims. It is a key stopping point for China’s ships on their way through the area, and satellite imagery showed two identifiable China Coast Guard ships there on Monday morning.

Subi Reef sits less than 13 nautical miles from Thitu Island, a feature occupied by the Philippines that was recently upgraded with a beaching ramp and improved airstrip. However, Thitu’s facilities pale in comparison to those at Subi, which has a 3,000-meter runway, radar and communications arrays and shelters for missile batteries.

China Coast Guard and maritime militia ships are commonplace off the coast of the Philippines, whose President Rodrigo Duterte last week conceded that he had no power to enforce the Philippines’ ownership of territories claimed by China in the South China Sea. “China is claiming it, we are claiming it. China has the arms, we do not have it. So, it’s simple as that. They are in possession of the property,” Duterte said in his annual State of the Nation Address. “So what can we do? We have to go to war. And I cannot afford it. Maybe some other president can. But I cannot,” he said.

China also has deployed two warships to Mischief Reef, which lies about 150 miles off the Philippine island of Palawan. Satellite imagery shows what appear to be a Type 054A frigate and a Type 056 corvette in service with the People’s Liberation Army Navy (PLAN) sailing in Mischief Reef’s expansive lagoon on Sunday.  Other ships running supplies to and from Mischief Reef’s settlement are also visible.

Mischief Reef is China’s largest artificial island in the South China Sea. Technically, under international law it is considered a “low-tide elevation,” but after large-scale reclamation efforts China has built it into a formidable base of operations, with a massive harbor and airstrip.

The U.S. updated its position on the South China Sea last month, refuting China’s insistence on holding maritime rights to the area and calling China’s claims to features that sit on the Philippine continental shelf “illegal.” In particular, the U.S. State Department stated on July 13 that China holds no lawful territorial or maritime claim to Mischief Reef or Second Thomas Shoal, both of which lay within Philippine waters.

For its part, Philippines has sent some conflicting signals about its stance toward China. Duterte has sought closer ties with Beijing, but more recently the Philippines appears to have tracked back toward its long-standing U.S. alliance and repudiated China’s claims to “historic rights” over virtually all the disputed waterway.

Philippine Defense Secretary Delfin Lorenzana welcomed the U.S. statement of July 13. And the Philippine Navy will attend RIMPAC. Its most modern warship, the BRP Jose Rizal, departed for Hawaii July 29.