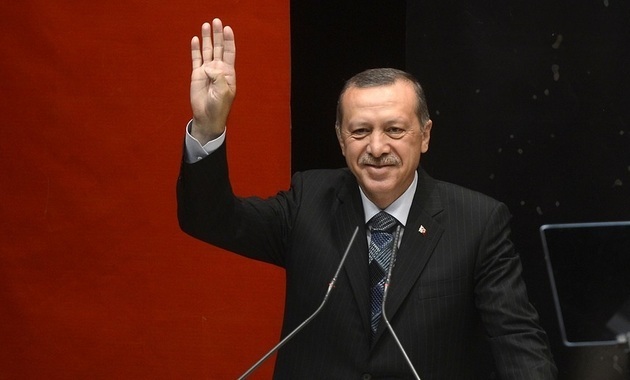 President Recep Tayyip Erdoğan embarked on an official two-day visit to Abu Dhabi on Monday, the first in nearly a decade, to open a new page in relations between Turkey and the United Arab Emirates (UAE) after years of tensions. Abu Dhabi Crown Prince Sheikh Mohammed bin Zayed Al Nahyan (MBZ) welcomed Erdoğan upon his arrival in Abu Dhabi with an official ceremony.

Daily Sabah reports that Erdogan last visited the UAE in 2013. Hsaid the countries ushered in a new era in bilateral relations with MBZ's visit to Ankara last November. Dialogue and cooperation between Turkey and the United Arab Emirates (UAE) is important for the peace and stability of the entire region, Erdoğan underlined prior to the trip. "We do not consider the security and stability of all brotherly countries in the Gulf region separate from our own," he told a news conference at Atatürk Airport in Istanbul before departing on his first visit since recovering from COVID-19 after testing positive early February. "We aim to improve the momentum to bring back our relations to the level they deserve. During my visit, we will take steps that will shape the next 50 years of our friendship and brotherhood with the UAE," he said.

"The complementary nature of the two economies points to a potential far beyond the current figures. The purpose of our visit is to quickly realize this potential," Erdogan said, adding that he believes Ankara and Abu Dhabi "will go a long way in this direction." With the volume of trade approaching $8 billion (TL 108.55 billion), the UAE is among Turkey’s leading trading partners, he said. "The UAE is the 10th largest market of the overseas contracting sector in Turkey," he said, noting that the UAE also makes "significant contributions to the dynamic investment environment" in Turkey. "Turkish construction companies in the UAE have so far undertaken 141 projects worth $13 billion," he added.

Ahead of the president’s visit the Turkish flag and the phrase "hoş geldiniz," meaning "welcome" in Turkish, were projected onto the Burj Khalifa, the tallest building in the UAE. During the visit, all aspects of bilateral relations will be discussed, including opportunities to enhance cooperation and regional and international developments. Erdoğan is also expected to visit EXPO 2020 Dubai, where Turkey’s national day will be celebrated.

Erdoğan and MBZ will attend a signing ceremony for a dozen agreements following one-on-one meetings between the delegations. The agreements will cover an array of fields, including investment, defense, transportation, agriculture, health and media. Ahead of the visit, a top foreign policy adviser to UAE President Sheikh Khalifa bin Zayed Al Nahyan on Sunday proclaimed that Erdoğan's trip would turn a new page in bilateral relations.

The president travels with a huge delegation, signaling the importance placed on ties with the UAE, including Turkey’s foreign, interior, economy, trade, industry and technology, transportation, culture and tourism and agriculture ministers. Erdoğan's visit comes as the UAE faces a growing threat from Yemen's Iran-backed Houthi rebels, who in recent weeks have launched a series of drone and missile attacks on the Gulf country and prompted increased defense cooperation with the United States and France.

Diplomatic adviser Anwar Gargash said on Twitter that Erdoğan's visit to the UAE, "which comes after Al Nahyan's visit to Turkey, opens a new positive page in bilateral relations between the two countries." Gargash said the visit "is in line with the UAE's direction towards strengthening bridges of communication and cooperation aimed at stability and prosperity in the region." Highlighting that the UAE continues to strengthen channels of communication with various countries in order to support the stability and prosperity of the region and well-being of its people, Gargash said the "UAE's policy is positive and rational and is in the interest of security, peace and regional development." "President Erdogan's visit to Abu Dhabi comes within this framework that we are betting on to ensure a prosperous future," he added.

In an exclusive article written for UAE-based daily Khaleej Times on Saturday, Erdoğan said Turkey is strengthening its relations with the UAE based on mutual trust and respect. Erdoğan said he was pleased the two countries' relations were evolving into a collaboration, adding that the “growing rapprochement between Turkey and the UAE is gaining new impetus as a result of our bilateral visits.” “The two countries have the potential to collaborate in a wide range of areas across the globe, particularly in our immediate neighborhood and Africa,” he noted. “Turkey and the UAE together can contribute to regional peace, stability and prosperity,” Erdoğan underlined.

Erdoğan’s visit comes after MBZ in November last year visited Turkey for the first time since 2012. Erdoğan and MBZ oversaw the signing of almost a dozen cooperation agreements, including in technology, energy, trade and the environment, as well as deals allowing direct investments and cooperation between the two countries’ stock exchanges and central banks. Abu Dhabi also announced a $10 billion fund for investments in Turkey during the visit. The two countries have seen their ties affected by regional tensions, including the conflict in Libya, where the UAE and Turkey have backed opposing sides in recent years. Turkey last year accused the UAE of bringing chaos to the Middle East through its interventions in Libya and Yemen, while the UAE and several other countries criticized Turkey’s military actions.

Relations hit an all-time low when Erdoğan said that Ankara could suspend diplomatic ties with the Abu Dhabi administration after the UAE-Israel deal. Turkey also sided with Qatar in a Gulf dispute, putting it at odds with the UAE, Saudi Arabia and Egypt, while Turkish support last year helped Libya’s United Nations-backed government in Tripoli drive back UAE-supported forces attempting to seize the capital. However, 2021 saw Turkey seeking warmer ties with several regional countries and longtime foes after many tumultuous years. Converging interests have driven regional power shifts in the Middle East, mainly led by regional powerhouses Turkey and the UAE. The diplomatic maneuvering signals a growing realization across the region that the United States’ interest is moving elsewhere and that now is the time for negotiations that were unthinkable just a year ago.

Turkey is also engaged in an effort to mend frayed ties with other regional powers, including Egypt and Saudi Arabia. "Turkey believes that the future of the region should be shaped on the basis of economic cooperation and political dialogue," Fahrettin Altun, head of the Communications Directorate, wrote in an article for the Emirati daily Al-Ittihad on Saturday. Altun said Turkey is pleased to see that the UAE shares the same vision and is ready to work with Ankara for a more stable and prosperous region. "As Turkey and the UAE, we believe that regional economic cooperation, both at the bilateral and multilateral levels, can be the basis for the needed stability and peace in the region," Altun wrote. Altun expressed his belief that both countries are committed to boosting regional cooperation and creating new investment opportunities that will cultivate constructive economic ties.