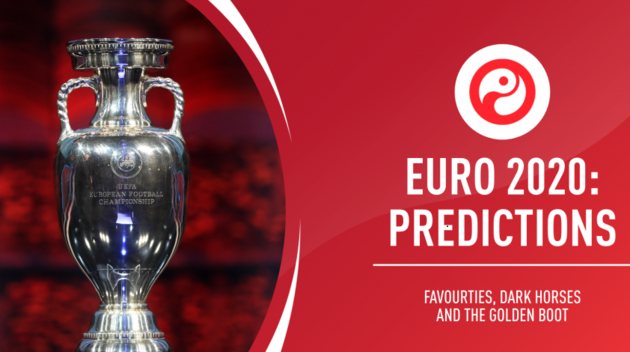 With the Euro 2020 play-off fixtures now just around the corner, we’ve cast our eyes ahead to Euro 2020 predictions. There are four more places at the tournament up for grabs, who will overachieve, who will underperform and which players should you be looking out for this summer? Squawka presents its review in the article Euro 2020 predictions: Tournament favourites, dark horses and Golden Boot winner.

The current England Euro 2020 squad find themselves in the unusual position of tournament favourites. Gareth Southgate’s men went into the World Cup with little expectation and reached the semi-finals – losing to their Euro 2020 opening opponents Croatia 2-1 after extra time. One of the main benefits of the 2018 World Cup squad was the tender age of the majority of Southgate’s selection – a lot of the star performers will be around for the next two or three tournaments at least.

With another two years worth of experience in the bag, plus the rise of international football novices such as Jadon Sancho, Trent Alexander-Arnold and Jack Grealish will surely make the Three Lions a stronger team. Defensively, the team have a lot to work on, but with home advantage for most of their Euro 2020 fixture schedule, you can see why England are being rated alongside the likes of France, Netherlands and Belgium as potential winners.

It’s very rare for a World Cup holder from Europe not to enter a the European Championships as favourites – so why are Les Bleus not the tournament favourites? Well, out of the 12 cities joint-hosting different stages of the competition, France does not have a participating city – meaning all of their games will either be in neutral or ‘away’ venues.

The reigning world champions may also prove to be a victim of their own success in terms of their Euro 2020 chances having failed to build on their World Cup triumph in Russia when they narrowly missing out in the Nations League group of death on goal difference to the Netherlands.

With plenty of their World Cup stars still in their prime years – or yet to even enter their respective peaks – France will fancy their chances of replicating their Euro 2000 and World Cup 2002 triumphs to hold both prestigious international honours at the same time.

After a forgettable spell as Everton manager ended with Ronald Koeman being sacked and the Netherlands national team missing out in qualification for both Euro 2016 and the 2018 World Cup, it’s been quite a resurgence for both parties to see the Oranje being labelled amongst the Euro 2020 favourites.

So what’s changed over the last few years? The building block for all great international teams starts at the back, and with a centre-half partnership of Mathijs De Ligt and Virgil Van Dijk, strikers will likely be feeding off scraps against the Netherlands at Euro 2020.

Another big improvement is the self belief within the Netherlands Euro 2020 squad. Superstars such as Wesley Sneijder, Robin Van Persie and Arjen Robben have retired and have now been replaced by a new breed of Dutch talent that cannot only play with the ball, but are just as adept without it.

The likely midfield three of Frenkie de Jong, Gini Wijnaldum and Donny van de Beek will take some beating for technique, plus both retaining and regaining position. It’s the Netherlands’ lack of options in front of goal that could prove to be their downfall with Memphis Depay set for an extended spell on the sidelines.

The Red Devils claimed third place at the World Cup in 2018 and will be expecting to reach the same stage at the very least to meet expectations at this summer’s tournament. Belgium, arguably, have the best strength in depth of any international team in Europe and they will be a popular choice if they do go all the way and finally secure a major honour.

With a whole host of creative options including Eden Hazard, Kevin De Bruyne and Dries Mertens aiming to feed and supplement all-time Belgium top-scorer Romelu Lukaku, goals shouldn’t be hard to come by. Backed up by a solid and technical midfield and an experienced defence containing Tottenham’s Jan Vertonghen and Toby Alderweireld with Thibaut Courtois between the sticks, Belgium have all the ingredients to win a national tournament.

The Norwegians are yet to qualify for the tournament, but know they have to find a way past Serbia and Scotland or Israel to book their place at Euro 2020. Lars Lagerbäck’s side would undoubtedly be outsiders to reach the tournament knock-out stages if they do navigate the play-offs successfully, but have a host of talented players at their disposal.

The aforementioned Haaland has shown confidence and quality are not going to be an issue leading into the tournament while Martin Ødegaard is starting to live up to his status as a future golden boy and will be chief supplier to Haaland and Bournemouth’s Josh King – who was a transfer target for Manchester United target as recently as January.

Sheffield United’s Sander Berge provides steel in midfield and, as he gains more experience within Chris Wilder’s side, will further strengthen the spine of his national team. The defence will be at risk of being exposed by the elite sides at Euro 2020, but Norway will be an exciting watch regardless. They will need to ride their luck, but an eye-catching run like the one Iceland enjoyed four years ago is not entirely out of the question.