Expectations of Ukraine and Belarus from Mike Pompeo's visit 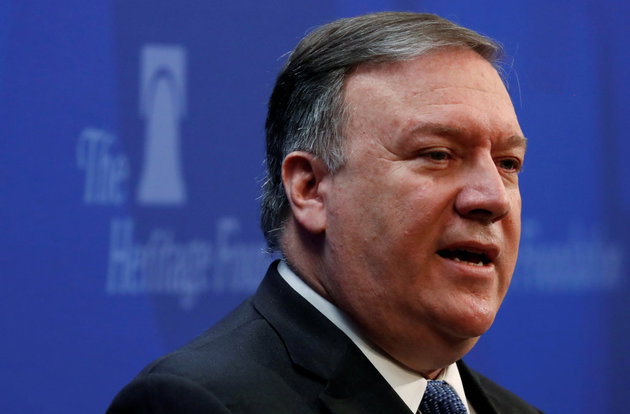 U.S. Secretary of State Mike Pompeo will travel to Kiev and Minsk later in the month. Both Ukraine and Belarus make no secret of their enthusiasm - the guest is extraordinary, and they eagerly await him. The former Soviet republics have generally similar hopes of Pompeo helping them in confronting (Ukraine) and resolving the contradictions (Belarus) with Russia. Washington has one main goal - reducing Russia's influence globally as much as possible,  strengthening the U.S. position where possible and as much as possible.

Mike Pompeo will arrive in Ukraine on January 30. He was scheduled to arrive on January 3, but for some reason the visit was postponed. The Secretary of State will meet with President of Ukraine Vladimir Zelensky, as well as Minister of Foreign Affairs Vadym Prystaiko and Defence Minister Andriy Zagorodniuk. They are expected to discuss Donbass, Ukrainian-Russian relations and reforms in Ukraine.

The Ukrainian side does not hide that it wants to discuss with the guest possible changes in the Minsk agreements. Kiev's line is simple: the implementation of Donbass political agreements (amnesty, local elections, expanding the competencies of the local authorities) must be preceded by the implementation of agreements guaranteeing stability in this region - the withdrawal of non-Ukrainian military units, control of the Russian-Ukrainian section of the state border by at least impartial forces. That is there's nothing new. This is what Petro Poroshenko wanted when he was president. That's what Vladimir Zelensky tries to achieve. But here comes the paradox, what the former and current presidents tried to achieve, made Ukraine's law enforcement agencies suspicious, so that they summoned Poroshenko for questioning.

After interrogation, the ex-president said that he did not understand what was happening, the investigators asked him some meaningless questions, so he concluded: the new government "put a hit out" on the previous one, so the political lynching is coming. But that's a primitive explanation for what's going on, although it cannot be called groundless. The new power's pressure on the former one may well take place. Moreover, it may have a logical explanation.

Zelensky and his team are under pressure. They continue to receive questions like where is the promised normalization of the Donbass situation. But attempts to get things moving by some kind of "compromise", for example, giving consent to hold the local elections, are smashed by the rejection of this compromise by those asking about the progress in the settlement. The opposition, with Poroshenko’s team first in line, warned the authorities: attempts to do something in the Donbass before implementing part of the plan for guaranteeing security and stability will provoke such a reaction in society that Zelensky will have a hard time. That is, Poroshenko and his team do not let Zelensky do what they themselves signed back then. Now, the authorities are interested in the circumstances of that signing. Perhaps they themselves suspected something, and perhaps on the tip from the current government, which was trying to untie its hands and make progress towards a settlement of the Donbass conflict.

It is clear that while not free in making decisions, Ukraine needs Mike Pompeo's visit. The former government, which hopes that the secretary of state will return them a more comfortable political environment that is not interrupted by questioning, needs it either. A new government, hoping to implement its plans with the U.S. game changer's approval, also needs it. In any case, one should not expect that this topic will be much talked of. Moreover, it will be discussed behind the scenes, and the agreements reached can be judged as the situation develops.

On the eve of his visit, Mike Pompeo announced that he will visit Kiev to express support for Ukraine's sovereignty and territorial integrity, remembering that this state renounced its own possession of nuclear weapons in exchange for security guarantees and obligations from the U.S. to provide all possible assistance in order to ensure peace and stability. The Secretary of State emphasized that Kiev was under powerful pressure from Moscow under President Barack Obama, and now Donald Trump has to correct the situation, doing what the former president should have done, but didn't. According to Pompeo, Washington has already provided defensive weapons to Ukraine to strengthen its defense capabilities and will continue to assist President Zelensky in implementing his program to combat corruption and strengthen democracy.

There is a slightly different agenda in Minsk, although it is also based on contradictions with Russia. Contrary to all predictions, the protracted oil conflict is far from over. During a recent meeting with employees of one of the local enterprises, President of Belarus Alexander Lukashenko said that he still hopes to find a solution during negotiations with Russian President Vladimir Putin. But at the same time, according to him, a positive solution to the issue also depends on many people related to oil supplies to Belarus, who were so interested in this so much that due to their so-called interest Russian oil could be exported to Belarus at prices above world market levels. Lukashenko noted that when Putin learned about this at the end of last year, he was outraged, but "apparently, something happened and the situation is still far from being resolved." The Belarusian leader made it clear that Russia's reluctance to meet Belarus' needs is pressure on integration issues, but "I can't betray you and dissolve Belarus, even in the brotherly Russia."

Lukashenko has already shown what he’s going to do if Moscow continues to persist. According to him, Minsk has three options: switching to alternative supplies - Belarus received the first batch of Norwegian oil via the Baltic ports and by rail; obtaining oil from Poland by using the Druzhba pipeline in reverse, which will simultaneously reduce the volume of Russian oil exports; using Ukraine's Odessa-Brody pipeline to supply oil from the world market - this could be oil from Arab countries, which are ready, according to Lukashenko, to deliver as much as Minsk wants.

The Belarusian leader also reported on countermeasures, which he is ready to use if Russia forgets about their allied relations. He can introduce an environmental tax on Russian oil transit or raise rent prices for Russia's military facilities on Belarusian territory.

It seems that Lukashenko is ready to use Pompeo's upcoming visit to push his interests. He has already turned to the United States with a proposal to establish energy cooperation. In other words, he suggested Washington to supply oil to Belarus. The move seems to be a win-win. Washington may agree on an oil partnership on Minsk conditions, keeping in mind the diminishing Russia's influence and the strengthening of its own positions. In this case, Moscow, according to the Belarusian president's plan, will think twice. But if Washington is guided primarily by economic considerations in this matter, then Lukashenko will be able to gain political points - after listening to the West's another criticism of violations of democratic standards in Belarus, he may talk about the West's indecision or inability to help, and that there's no one-way relations in politics.

Lukashenko to meet with Putin