Financial Times: How to halt interference in Libya conflict 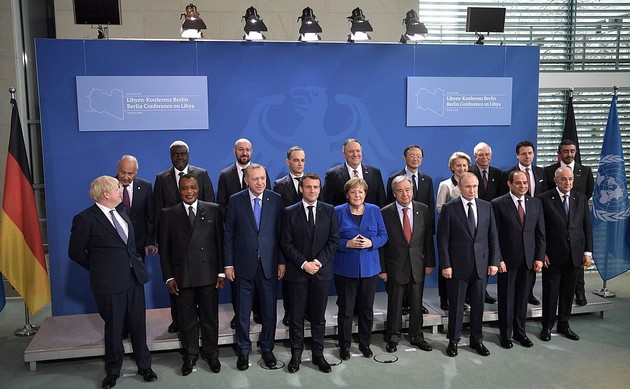 Russia, Turkey, the United Arab Emirates and other foreign powers have promised to end all interference in the armed conflict in Libya, as part of a German-brokered effort to halt escalating violence and chaos in the north African country and prepare the ground for a UN-sponsored peace process.

Financial Times reports in its article Foreign powers vow to halt interference in Libya conflict that the promise was contained in a document agreed by world leaders at a conference in Berlin on Sunday, including Russia’s Vladimir Putin, Recep Tayyip Erdogan of Turkey, France’s Emmanuel Macron and Abdel Fattah al-Sisi of Egypt. It also calls for a durable ceasefire and for steps towards “the dismantling of armed groups and militias”. Outside powers are urged to respect the arms embargo imposed by the UN on Libya. “Everyone agreed . . . that we need a political solution,” Chancellor Angela Merkel of Germany said afterwards. “There is no chance of a military solution.”

On the ground in Libya, however, there were fresh signs of military escalation as forces loyal to General Khalifa Haftar shut down an oil pipeline and halted crude exports from ports under his control. Analysts also voiced doubt over whether all foreign powers would keep their promise of non-interference and stop the flow of arms.

Jalel Harchaoui, research fellow at the Clingendael Institute, a Dutch think-tank, said the results of the meeting had been “modest”. He warned that the warring parties had yet to agree to a formal ceasefire and that there was no mechanism to enforce the arms embargo.

Russia, Turkey and the United Arab Emirates, in particular, have played an increasingly important role in Libya, offering military and political support to the two main factions vying for control of the oil-rich country. The Berlin conference was widely seen as an attempt to regain the diplomatic initiative from Ankara and Moscow, which back opposing sides in Libya and have been trying to expand their influence in a country of crucial strategic importance.

Libya has been wracked by civil war and instability since the 2011 revolution that toppled Muammer Gaddafi. On paper, the country is ruled by the UN-backed Government of National Accord (GNA) in Tripoli, led by Fayez al Sarraj, but it faces a formidable challenge on the ground from Gen Haftar and his Libyan National Army (LNA).

Gen Haftar, whose forces control much of the east and the south, has laid siege to the capital Tripoli since April last year. In a striking show of force ahead of the Berlin conference, he halted oil shipments from ports under his control on Saturday, slashing crude exports by 800,000 barrels a day.

On Sunday, Gen Haftar shut down much of the remaining oil production. National Oil Corporation, the state-owned company, confirmed that individuals from the Petroleum Facilities Guard under the command of the LNA had shut down the Hamada-Zawiya pipeline, forcing the corporation to limit production at the Sharara and El Feel oilfields. The shutdown, an NOC spokesman explained, meant approximately another 400,000 barrels of production going offline. “When storage tanks are full in a few days, Libya’s oil production will be limited to 72,000 b/d . . . from over 1.2m b/d yesterday,” said the NOC spokesman.

Recognising the danger of an all-out struggle for oil resources, the Berlin document seeks to bolster the position of the NOC, saying it is the “sole independent and legitimate oil company”. It calls on all parties “to guarantee the security of its installations and refrain from any hostilities against all oil facilities and infrastructure”.

Gen Haftar and Mr al Sarraj were also in Berlin on Sunday, though not as formal participants. Both men agreed to nominate five members each to a so-called military committee that will be tasked with establishing a lasting ceasefire. António Guterres, UN secretary-general, said the first meeting of the committee would be convened in Geneva in the coming days.

The two sides have come to rely heavily on diplomatic and military backing from abroad, with Russia, Egypt, the United Arab Emirates and France siding with Gen Haftar while Turkey and Italy support the government in Tripoli. Russian mercenaries from the Wagner Group, linked to the Kremlin, have been fighting alongside Gen Haftar’s forces. Turkey has sent Syrian mercenaries, weapons and military experts to the GNA side in recent weeks. Western diplomats and analysts argue that the conflict has raged on in large part as a result of outside intervention.

“The most recent iteration of the conflict is driven almost solely from the outside,” said Tarek Megerisi, a policy fellow at the European Council on Foreign Relations. “A large proportion of the fighters have come from abroad, the money is coming from abroad and the weapons are coming from abroad.”

The Berlin conference was called as part of wider diplomatic effort to prevent further escalation and create the conditions for a UN-led peace process led by Ghassan Salame, the UN special envoy. It follows a meeting in Moscow last week at which Russia and Turkey sought to broker a formal ceasefire agreement.

Berlin’s decision to take a leading role reflects in part hard-nosed political interests, notably the desire to control the flow of African migrants who use Libya as a launch pad for their journey to Europe. Diplomats are also deeply concerned about the destabilising impact the conflict has had on the wider region, including in Tunisia and Mali. Islamist insurgents across the Sahel often look to Libya for arms supplies and to replenish ranks.

But Germany is also keen to send a broader message by showing that a multilateral peace efforts can still deliver results, despite the growing disconnect between the US and Europe and the influence of authoritarian leaders such as Mr Putin and Mr Erdogan.