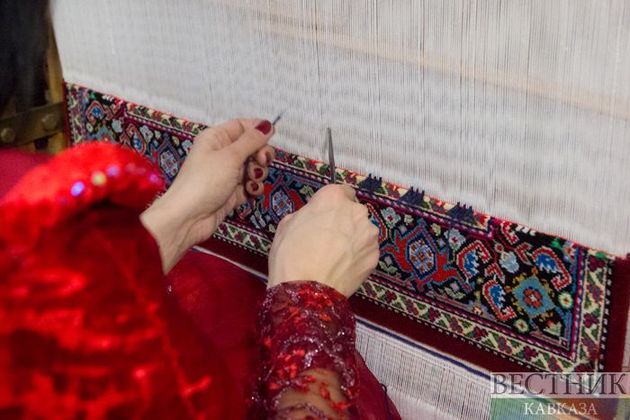 Floors, walls, and ceilings: there is no surface carpets have not conquered. People have been rolling out the red carpet for special occasions since the Greeks used it to welcome home their warriors two millennia ago. A magic carpet ride is another thrilling staple of the imagination. Its latest mission for Disney’s Aladdin generated over a billion dollars at the box office. Carpets inspire cool fashion collaborations like Virgil Abloh’s home décor for IKEA or the kitsch merchandise from rapper Tommy Cash and Rick Owens.

Stephan Rabimov writes in the Forbes article, that in the ancient world, carpet commerce along the famed Silk Road was valued by weight like precious metals. So it is no wonder that a nation at the physical and metaphorical threshold of East and West is taking carpets to the next level. Since traditional Azerbaijani carpet weaving was registered as part of the Intangible Cultural Heritage of Humanity by UNESCO in 2010, the practice has been enjoying renewed attention both from international consumers and the next generation of local artisans. Azerbaijan and its capital Baku are at the epicenter of the 21st century carpet renaissance. 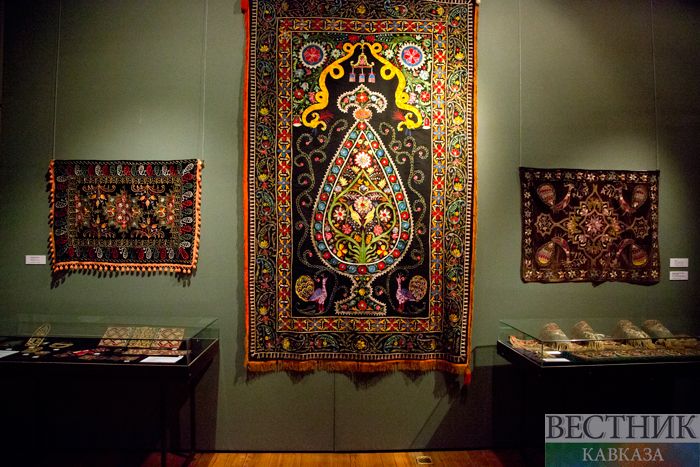 From the shores of the Caspian Sea to the valleys and gorges of Shirvan and the borderlands of the Talysh Mountains, each of Azerbaijan’s ten regions has its indigenous weaving techniques and design elements. In fact, you can explore the country easily following the route of Azerkhalcha workshops where local artisans manage over 500 designs in production. One of the most beloved symbols is the buta which depicts fire in over ninety known variations.

Another popular visual is a peacock, itself representative of fire. A classic varni pattern consists of complex S-shaped lines spreading horizontally and vertically to create a stylized image of a dragon: yet another fire sign. 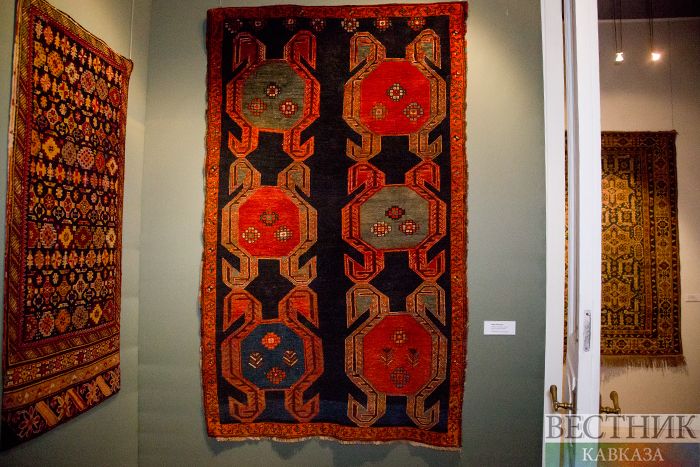 Such devotion to fire is understandable in a country so rich with natural gas and oil reserves it’s often considered the birthplace of the modern petroleum industry. From the 3rd century on, the sacred land of the Absheron where Baku is now located, was known throughout the Arabic world as the supplier of oil. 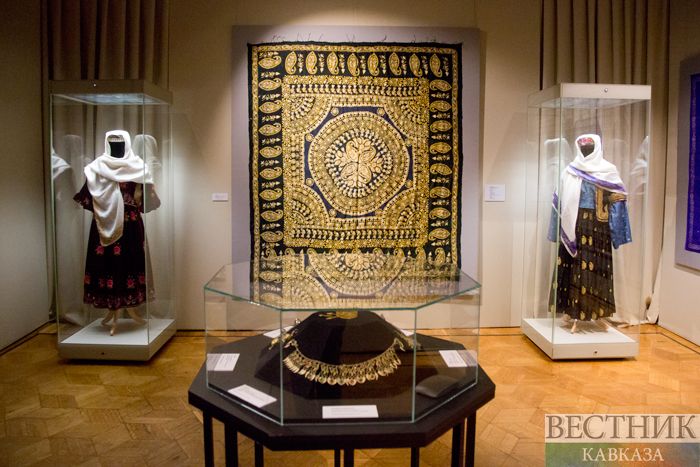 Baku’s intercultural credentials are strong. The city has hosted both the Eurovision Song Contest and the Islamic Solidarity Games. However, the importance of carpets here supersedes religion and statehood. When the Azerbaijan National Carpet Museum opened in 1967 following the Soviet thaw, it was housed at the historic Juma Mosque. After independence in 1992, it moved into a building formerly occupied by a Vladimir Lenin museum. Carpets symbolically outlive the epochs that produce them. 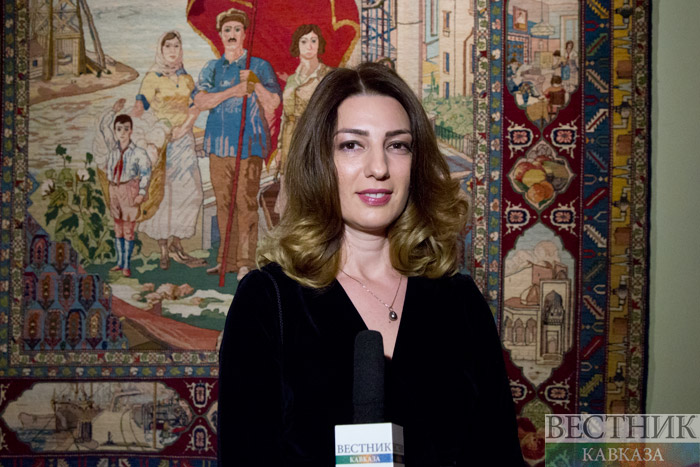 “Azerbaijani carpets are remarkable because they have absorbed the spiritual experience of the people which aestheticizes the idea of the Absolute. The ornament is a kind of visual language; all its elements are significant,” says Dr. Shirin Melikova, Director of the Azerbaijan National Carpet Museum. 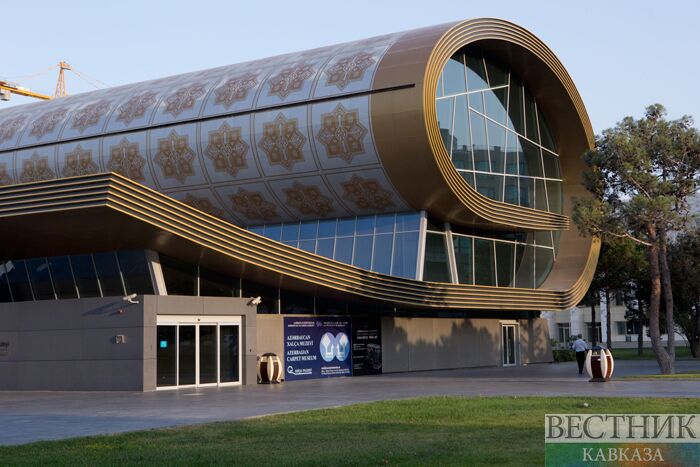 The current museum, designed by Austrian maverick Franz Janz, resembles a rolled-up carpet and has become an architectural gem in the future-oriented skyline along with Zaha Hadid’s fluid Heydar Aliyev Center, which also houses a unique carpets collection, and the instantly iconic Flame Towers by Hellmuth, Obata and Kassabaum. Craftsmanship heritage here serves as motivation for innovation. Speaking of which, the museum’s virtual tour is delightful. Feel free to add it to your list of the Social Distancing edutainment resources http://azcarpetmuseum.az/front/ru

Every creative tradition must have new disciples to survive. In the 2000s, ceramics became the hottest millennial artform after potter Grayson Perry won the prestigious Turner Prize. Last year, thanks to rising pop diva Lizzo and her signature flute, sales of wind instruments spiked 30% in the US. 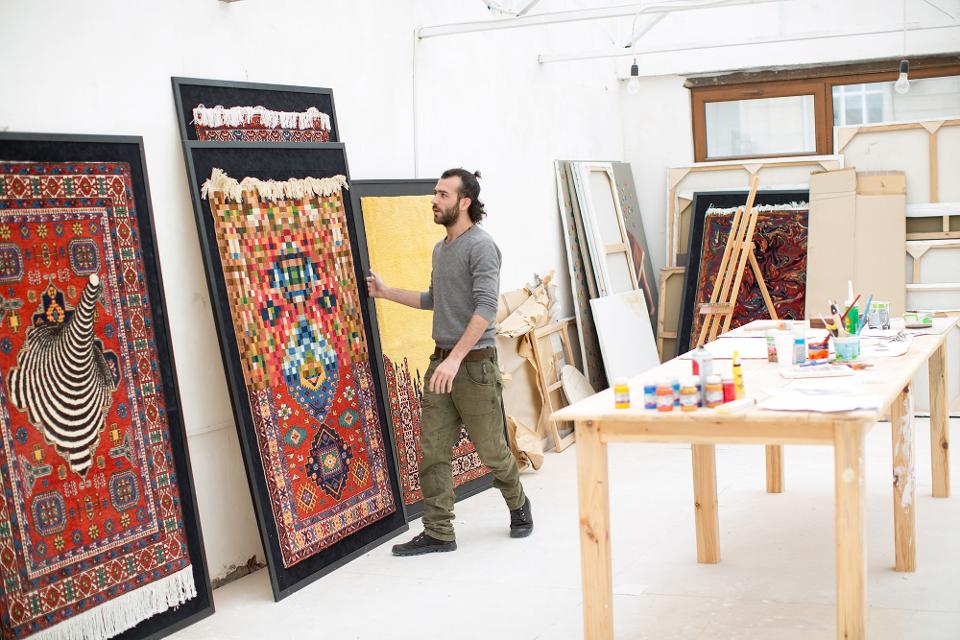 The artist putting Azerbaijani carpet know-how on the world stage is Faig Ahmed. One of his earliest memories is cutting up a family rug, because he wanted to rearrange the pattern. From an architecture student in love with quantum mechanics and spiritual practices, he has become a 21st century mystic with an engineering degree. 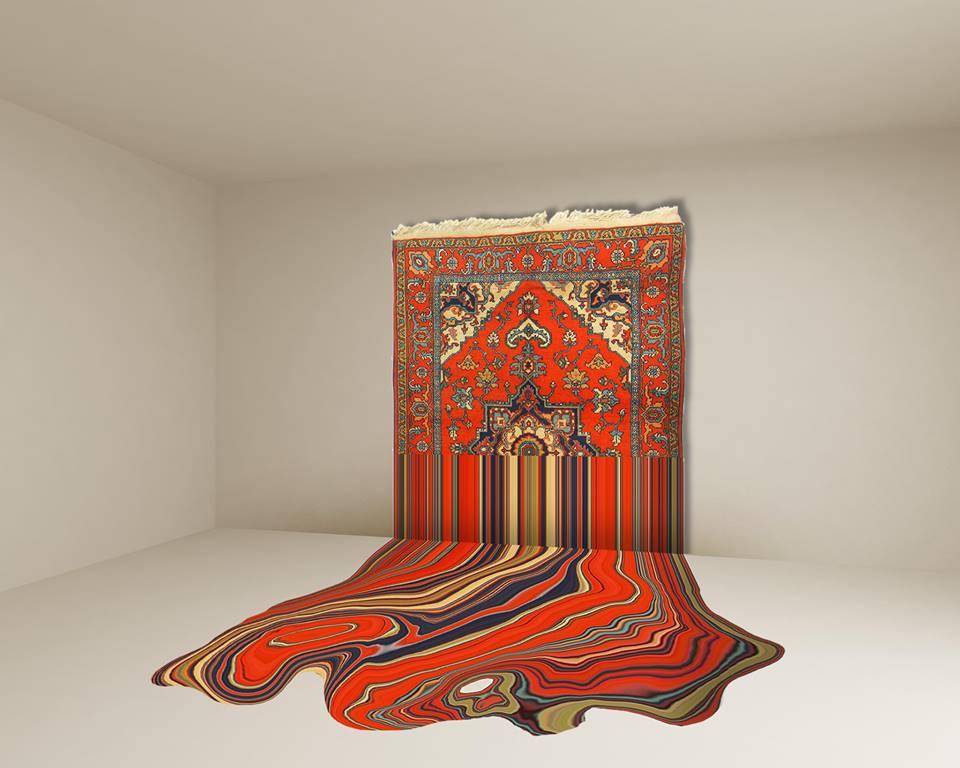 “I started with anthropological research of cultures that have never been connected, despite the symbols carrying similar meanings. I realized I have to change myself to see everyday objects differently. People ask why I make this art. It’s like asking why a shaman does shamanism. It is very personal. My artworks are just my reports that reflect various periods of my ongoing investigations. The final result itself doesn’t interest me that much,” says Ahmed.

The world, however, cannot get enough of these extraordinary carpet experiments. Art critics say that his “magical non-dualism” is the greatest innovation to happen to carpet weaving in centuries. His work has been exhibited in galleries from Austria to Australia and purchased by collectors from academic institutions to royal families.

Truth is that Azerbaijani carpets have been an integral part of European cultural landscape since the Late Middle Ages. You can spot them in such seminal artworks of the period as “Madonna and Child” (1487) by Hans Memling, “The Ambassadors” (1533) by Hans Holbein the Younger, or “The Annunciation” (1486) by Carlo Crivelli. 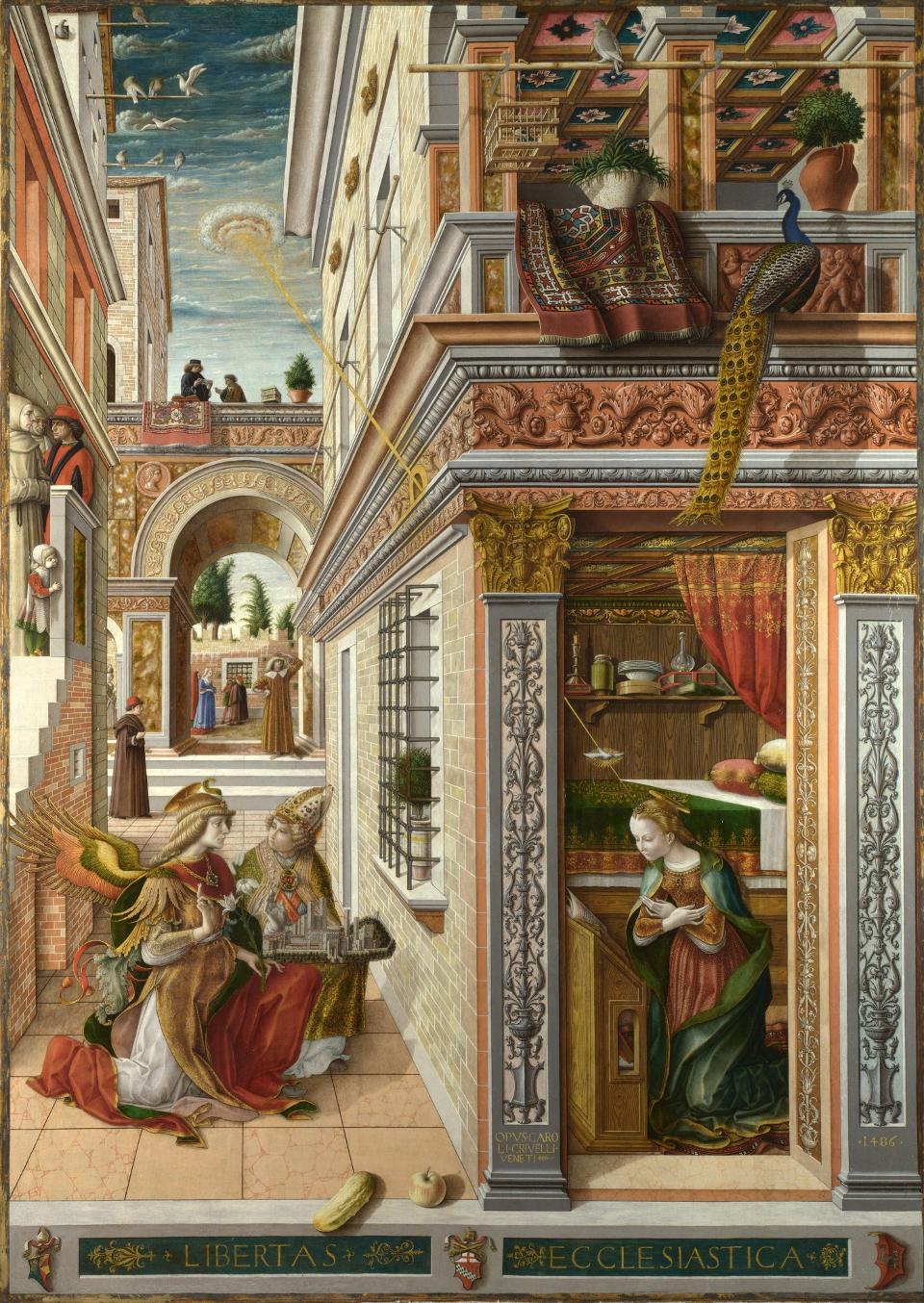 Fast forward five hundred years to meet another contemporary (and more affordable) champion of Azerbaijan’s carpet weaving heritage. The CHELEBI home décor collective was born out of the 360-carpet room installation that impressed the Venice Biennale in 2013. Artist Farid Rasulov teamed up with Aida Mahmudova and Orkhan Huseynov to launch a brand of limited-edition handmade goods based on traditional Azeri techniques, including Chelebi weaving. 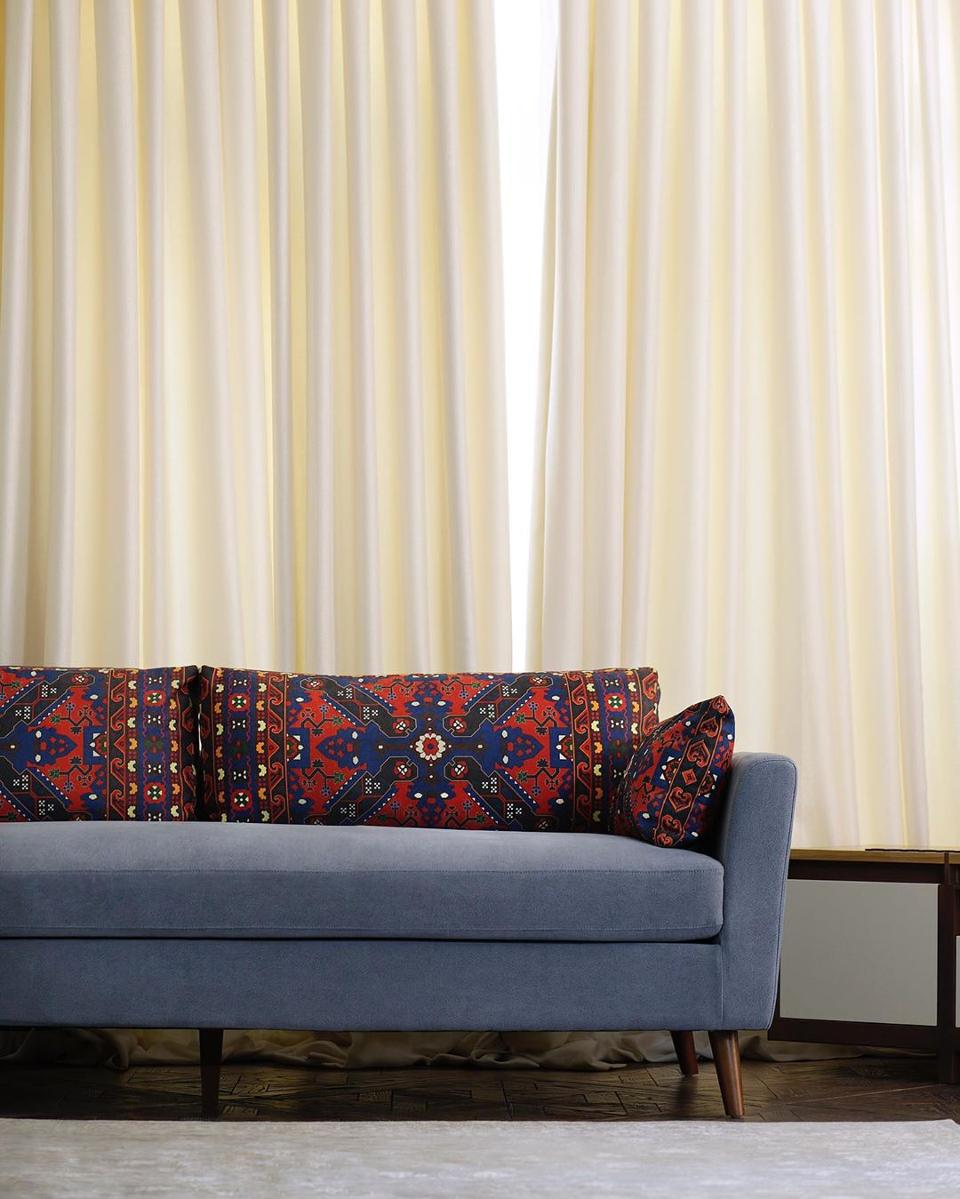 Art is seldom without controversy, so among the classic motifs for their products you may find aspects of Caucasus folklore such as bride kidnapping. Baku’s exclusive carpet shops and many souvenir markets offer a great variety of aesthetic choices from the minimalist to the lavish. Notably, the front row of Azerbaijan Fashion Week shows is always covered with beautiful carpets. Luxury is hand-woven into the cultural fabric of this land. 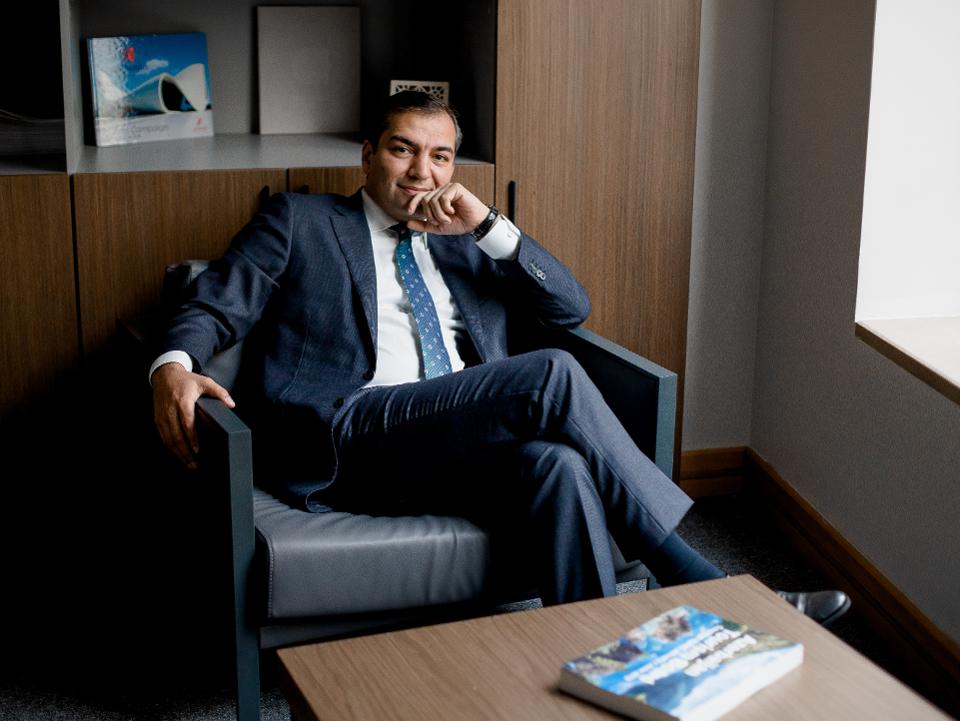 Fuad Naghiyev, director of the State Tourism Agency of Azerbaijan, shared that “The intangible heritage such as carpet weaving points to nation’s values, beliefs and legacy. Here you can immerse yourself in genuine ancient traditions today. It is one of many good reasons to visit our country.”

Recently the hashtag #TakeAnotherLook has been designated as a social media tool to encourage appreciation of this multifaceted mountainous culture. It looks like the world might be ready to re-discover the proud beauty of Azerbaijan, one carpet ride at a time.