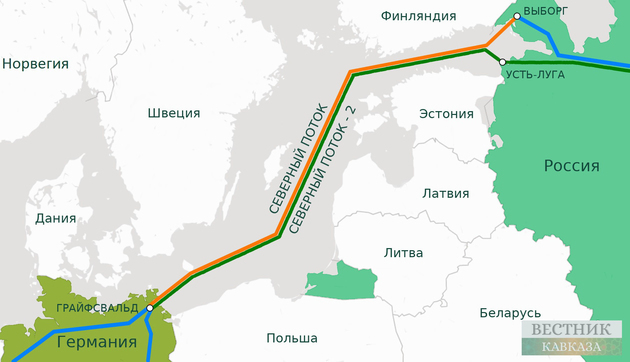 The project, which is known as Nord Stream 2 and would ship natural gas from Russia to Germany, has been a point of contention with the U.S., which had previously waived sanctions on the project even as officials worried it would increase Europe’s dependence on Russia, which is already a major natural gas supplier for the continent, The Hill reports.

Germany’s decision, part of a sharp response among Western powers to Russia’s incursion into Ukraine, represents a significant step by a U.S. ally in pushing back against Moscow. “It is important to launch new sanctions now in order to prevent an escalation and a disaster,” German Chancellor Olaf Scholz said Tuesday in announcing a move to prevent the pipeline’s certification.

While the Nord Stream 2 pipeline was not yet in operation, experts described Germany’s decision as an additional hit to a region that has already struggled with high natural gas prices. There’s also concern that Russian President Vladimir Putin could opt to cut existing natural gas supplies.

“European policymakers saw Nord Stream 2 as a vital tool in easing the pressure on consumers already facing record energy prices,” said Nicola De Blasio, a senior fellow in the Environment and Natural Resources Program at Harvard’s Belfer Center for Science and International Affairs, in an email.

The price of Dutch TTF natural gas, a European future, has risen over the past few days, and has particularly spiked over the last day. But, it’s still down from where it was a month ago during a period of heightened prices. “Even if President Putin has pledged that Russia will not interrupt its natural gas supplies, Germany, Poland, Hungary, Slovakia, Lithuania, Finland, Austria all depend on Russian natural gas imports for between 50 and 100 percent. Germany, for example, imports half of its natural gas demand from Russia and has consistently argued that Nord Stream 2 is vital to diversify energy supplies to Europe,” De Blasio added.

Nevertheless, European officials have sought to reassure the public there will be enough natural gas to make it through winter. "Even in case of full disruption of gas supply from Russia, we are on the safe side for this winter," European Commission President Ursula von der Leyen recently told the Munich Security Conference.

Citing these comments, Teresa Eder, a program associate with the Wilson Center’s Global Europe Program, said she thinks the Nord Stream announcement will have more implications for price than supply. “It’s not going to be a supply issue, I think it will be a price issue,” Eder told The Hill.

Liana Fix, a resident fellow at the German Marshall Fund, said the extent to which this will impact energy depends on how Russia responds. “What will have an effect is how Moscow reacts to that and whether Moscow uses energy sanctions against Europe,” Fix said.

Former U.S. Ambassador to Azerbaijan Richard Morningstar, the founding director and chairman of the Global Energy Center at the Atlantic Council, also said that what happens next will depend on whether Putin sticks to his pledge not to interfere with pipelines going to Europe. “If that continues to be the case, I don’t think the determination not to go forward will have a material effect, because no gas is going through Nord Stream now,” Morningstar said. “If in fact gas to Ukraine gets interrupted … that’s a different story.”

Germany’s decision wasn’t just one about energy policy. It was also political. Fix pointed out that the move represented strong and immediate pushback on Russia from Germany. “This was a very clear sign very early at the beginning of the conflict, and it also demonstrated that Germany expects the escalation to become worse,” Fix said.

Morningstar added that it remains to be seen whether Germany’s move opens the door to further sanctions. “Further sanctions overall will depend on Russian behavior. Russia to now has not threatened to shut off other gas supplies,” he told The Hill in an email. “That could obviously change. If Russia were to decide to retaliate by cutting off energy supplies as retribution for US and European sanctions including Nordstream as well as other steps that we have taken, that could obviously have an effect on energy supplies.

The decision has major implications in a symbolic sense as well, said Katja Yafimava, a senior research fellow at the Oxford Institute for Energy Studies Gas Research Program. Germany’s move “indicates a break with the previous German government’s position of insulating [Nord Stream 2] from politics,” Yafimava told The Hill in an email. “Germany is now willing to add a political dimension to what normally would have been a technical/regulatory procedure. As such it introduced further uncertainty over whether and when NS2 will be allowed to operate.”

Despite the lack of immediate impact on gas supplies, she added, it will likely compound the anxiety in the market. Russia supplies about 35 percent of Europe’s natural gas, and other countries like Qatar have said it would be a challenge to compensate for any losses from Russian supply that may occur.

Meanwhile, President Biden on Tuesday announced initial sanctions on Russia, including against Russian sovereign debt and Russian elites, in addition to the country’s financial institutions. ” Last year, the Biden administration lifted sanctions against the Russian company behind the Nord Stream 2 pipeline in an effort to improve relations with Germany. The move was met with pushback by Republicans, as well as some Democrats, who argued that the U.S. should take a harder line against Russia.

Meanwhile, observers offered mixed opinions on Tuesday about whether Germany’s move against the pipeline will stick. “Sadly, both Europe and Russia know that eventually, the pipeline will need to be certified,” De Blasio predicted.

Fix disagreed, saying that the current situation keeps its future in jeopardy. “Given the political situation and given that the political conditions will only deteriorate and certainly not become better any time soon, this is very much a decision that is here to stay,” she said.