Health care to be central fight of U.S. presidential race 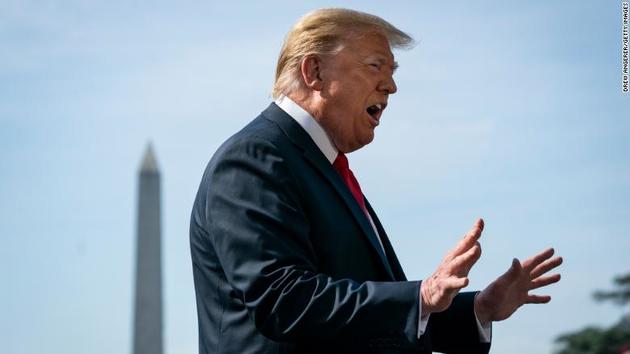 A bombshell report from The New York Times -- that Russians had tried to bribe Taliban fighters to kill US troops -- has brought Russia roaring back into the political conversation. Trump denies ever being briefed about it, but there's already pushback on both sides of the aisle. Third-ranking House Republican Liz Cheney is demanding answers from the White House, while Democrats say this fits Trump's pattern of behavior with Russia. Consider what Joe Biden tweeted on Sunday afternoon: "Donald Trump's entire presidency has been a gift to Putin, but this is beyond the pale."

CNN reports in its article Things do not look good for Trump 2020 right now on this and other problems Donald Trump faces during the presidential race. With rising coronavirus cases in nearly every state, the pandemic's grip is tightening. And without a vaccine, the nation's resources to combat it is limited to two tried-and-true things: Mask-wearing and social distancing.

Biden, last week, said he would require masks by law, and has criticized Trump's handling of the pandemic. "He hasn't done any of what needs to be done," Biden said during a Saturday night virtual fundraiser. "And now he's sending even more people back to work without a plan to safely reopen, hanging the open sign in the economy, crossing his fingers and telling his staff to slow down testing." Pelosi also doubled down on mask-wearing (and Trump's reluctance to be seen wearing one) on Sunday, calling a federal mask mandate "long overdue."

Trump and Pence have consistently punted mask regulations to cities and states, rather than issue a federal mandate. On Sunday in Texas, Pence encouraged Americans to wear masks, but again deferred to local ordinances on mask requirements.

Trump has long been reluctant to wear a mask in public even as efforts to protect the President's health ramp up. But don't hold your breath on Trump changing course ... even if other Republicans say "it would help" if he wore a mask.

President Trump's administration is forging ahead with its efforts to dismantle the Affordable Care Act -- a move that would take away health care for Americans in the middle of a pandemic. The Republican-led battle against the ACA is a decade old, but even more Americans are turning to the health care option amid job losses and the coronavirus. New federal data shows nearly half a million Americans turned to the federal Obamacare exchanges after losing health insurance coverage this year. President Trump is digging in, tweeting on Saturday that "Obamacare is a joke," and "I will ALWAYS PROTECT PEOPLE WITH PRE-EXISTING CONDITIONS, ALWAYS, ALWAYS,ALWAYS!!!"

As a result, health care is again proving to be a central fight of the presidential race. Priorities USA Action, a major Democratic super PAC supporting Biden, is already airing a television ad in Wisconsin, Pennsylvania and Michigan arguing that Trump is "failing on health care" by highlighting both the impact of the pandemic and the administration's effort to nullify the ACA. Right now, nearly every poll paints the same picture for Trump - If voters headed to the polls today, he'd lose. Significantly. Like, landslide loss. Biden is leading nationally and essentially every swing state that matters.

And consider the backdrop: The economy is down, the pandemic is raging, many Americans are being confronted by just how insidious and deep the racism that exists in this country truly is. Of course, there's still five months until Election Day. That means there are likely at least 128 news cycles until then, and Trump has faced unpopularity before. Just ... never like this.

Biden vows Putin will 'pay a price' for election meddling