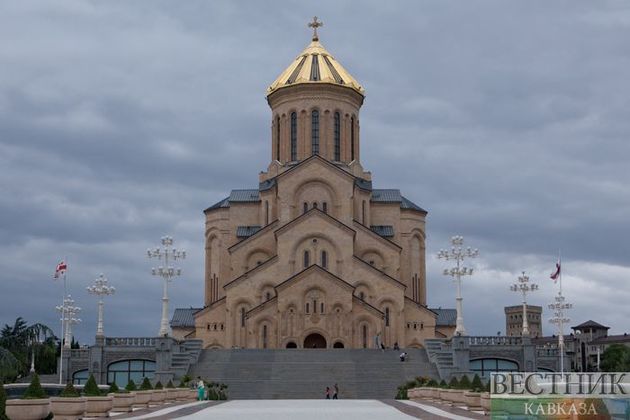 The Holy day Resurrection Sunday will be a day of unprecedented challenge for Georgia. Unlike all global religious confessions, the Georgian Orthodox Church (GOC) was probably the only one in the world that during the pandemic did not close the doors of churches and continued to conduct crowded services. Repeated negotiations between government representatives and the clergy, persuasion to follow the example of other churches, including Orthodox ones, and to refuse to perform services in the presence of parishioners turned out to be unsuccessful.

The only thing the Georgian patriarchate agreed to is to close access to the flock on Easter night in small churches. But the population never really wanted to attend small churches but went to the large ones, where the liturgy was held with special solemnity. In large churches, priests agreed to mark the floors and courtyards so that parishioners could observe a social distance of two meters.

The churchmen ‘circumvented’ the curfew hours from 21.00 to 6.00, introduced in Georgia along with the state of emergency. They invited the flock to the temples by 21:00. People will go home in the morning, after the end of the curfew prohibiting any movement.

This development is called a compromise between the government and the church. But in reality, it is unlikely, since some cabinet members and the mayor of Tbilisi,  Kakha Kaladze, a renowned football player in the recent past, periodically ask the population to stay home and refrain from visiting churches on Easter night. These requests still look timid. And that is understandable. In the fall, parliamentary elections are scheduled to determine who will rule the country over the next seven years. The ratings of the ruling Georgian Dream party are not as good as they used to be. In such circumstances, it is suicidal to quarrel with the country's most influential institution, capable of taking about 100 thousand people to the streets at once, as it was when sexual minorities tried to organize some rallies.

The piercing speeches of scientists, doctors, leading epidemiologists of the country, begging the population not to undermine the titanic efforts, allowing to successfully resist the coronavirus epidemic to this day, have not reached the goal - in Georgia,  there are a little more than 300 patients, about 80 recovered and three died. The head of the Center for Disease Control, Amiran Gamkrelidze, in his appeal noted that the Ministry of Health is already barely coping with its functions, the doctors have switched to almost around-the-clock work schedule. If the system cannot cope with the increased load, then Georgia can repeat the fate of Italy, where the authorities lost the account of the coffins.

The clergy have not been affected by the statistics. One of the senior representatives of the patriarchy said that in Georgia, there are relatively few sick people, not only thanks to the dedicated work of doctors but due to "pure sincere prayers of the priests." And the influential Metropolitan Jacob even unequivocally warned scientists, saying that he perfectly remembers how people treated alarmists during the wartime: no one in the world knows what coronavirus is, how it is transmitted, or whether it is transmitted at all, so there’s nothing to say about the unknown thing.

A group of Georgian theologians in desperation wrote a collective appeal to the heads of all Orthodox dioceses with a request to influence their Georgian brothers in the cross, who turned into a group of obscurantists putting at stake the fate of the nation. The letter says that the GOC has long been dominated by apocalyptic sentiments and authoritarianism, the church itself has become a stronghold of fanatics who blackmail the government, which is powerless against it and forced to accept its rules of the game.

A number of political scientists point to the actual violation of the articles of the Georgian Constitution guaranteeing the equal rights of all people, regardless of nationality and religion. The fact is that, as reported above, all religious organizations existing in Georgia essentially suspended their activities, having listened to the authorities. Catholic churches and churches of other Christian movements, including Baptist and neo-Protestant, mosques and synagogues, are closed to parishioners.

The head of the Spiritual Council of Muslims of Georgia, Sheikh Mirtag Asadov, pointed to this circumstance. "Muslims will celebrate Ramadan soon. Then we will open mosques for believers, and let everyone decide for himself whether to go to the mosque or to abstain," he said in an interview with one of the Georgian television channels. Sheikh is in trouble - he has been summoned to the State Security Service of Georgia. According to unconfirmed reports, a criminal case has been opened against him for "sabotage".

In such circumstances, the authorities took new measures to toughen the already harsh state of emergency. In accordance with recent government decisions, Tbilisi and other major cities of the country - Kutaisi, Batumi, Rustavi - are closed for 10 days. Earlier, Bolnisi, Marneuli, Vani, Lentekhi, about 10 villages were closed. Some regions are also seriously isolated. Also, in all major cities on Easter days, all cemeteries are closed to visitors. A complete ban on travel on personal vehicles has been introduced, excluding for employees of strategic facilities. Public transport, including the subway, remains inactive. Public assemblages of more than three people are forbidden - a favor in exchange for the GOC - if this is not a pharmacy or a grocery store, but with strict observance of social distance.

Epidemiologists are very pessimistic - they are almost convinced of the inevitable surge in the level of infection among the population. And this will be connected with the bright holiday of the Resurrection. Unless part of the population changes their minds and spends Easter night at home, in accordance with the requirements and recommendations of doctors and scientists.

Ilia II and Bidzina Ivanishvili: everything is under control