How Pashinyan provoked war that he eventually lost 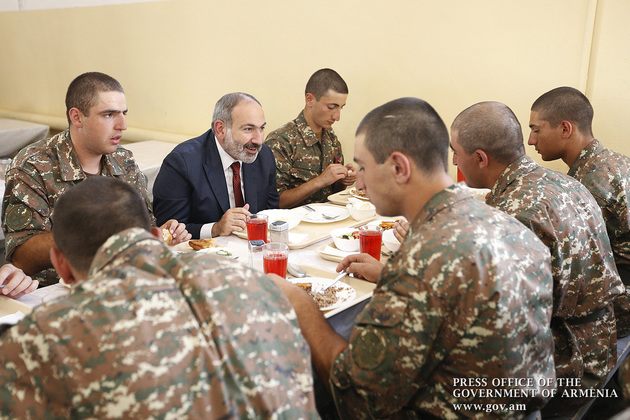 Almost from the moment he came to power in 2018, Armenia’s Prime Minister Nikol Pashinian rejected the “Basic Principles” worked out by the Minsk Group’s co-chairs (the United States, Russia, France) for resolving the Armenia-Azerbaijan conflict over Karabakh, The Jamestown Foundation writes in the article How Yerevan Walked Away From the ‘Basic Principles’ of Karabakh Conflict Settlement.

Tabled by the three co-chairing countries in 2009 and publicly endorsed by the three countries’ presidents, those Principles were accepted as a basis for further negotiations by Armenia and Azerbaijan in the ensuing years under the Minsk Group co-chairs’ mediation. The Basic Principles stipulated, in essence: Azerbaijan to regain seven Armenian-occupied districts adjacent to Upper (“Nagorno”) Karabakh; an overland corridor connecting Upper Karabakh with Armenia; an interim legal status with self-government and then a negotiated final status for Upper Karabakh, albeit short of outright secession from Azerbaijan; the right of all displaced persons and refugees to return; as well as international security guarantees for Upper Karabakh, including a peacekeeping operation. Since all actors, including Armenia, recognized Azerbaijan’s territorial integrity, Upper (“Nagorno”) Karabakh was never accepted as a negotiating party to the conflict.

All actors—the parties and the mediators—continued adhering to the Principles officially, Azerbaijan most consistently so. Pashinian walked away from the Basic Principles from the outset of his prime-ministerial tenure, however; and he did so ever-faster in the run-up to the second Karabakh war’s outbreak (September 27).  From 2018 onward, Pashinian insisted that Karabakh be included in the negotiation process as a party in its own right, which would have implied de facto recognition as a would-be state. He maintained that the negotiations could only advance if Karabakh participates on an equivalent basis with Azerbaijan and Armenia. On September 8, 2018, he told an audience of Armenian businessmen in Moscow, “I have already said that I see Artsakh [the Armenian name for Karabakh] as part of Armenia”.

On March 29, 2019, in New York, Armenia’s then–defense minister David Tonoian announced a new military doctrine as seizing “new territories in the event of a new war.” This offensive doctrine would replace Armenia’s hitherto defensive posture. By the same token, Tonoian announced that “the option of returning territories in exchange for peace will no longer exist” . Tonoian was referring to the Basic Principles’ underlying logic, whereby Armenia would return the seven districts to Azerbaijan as part of a peace settlement (“land for peace”). Tonoian resigned as defense minister in November 2020, following the lost war.

In Shusha on May 9, 2019 (the anniversary of the town’s takeover by Armenian forces in the first Karabakh war), Pashinian proclaimed, “Karabakh is Armenia. Period.” This declaration, no longer on the diplomatic circuit but in the public square, further undermined the credibility of the Minsk process at a time when Moscow was in the driver’s seat.

Pashinian also seemed to disavow the principle of returning the seven districts to Azerbaijan: “We say that the issue is not about those territories around Artsakh, the issue is about security. My opinion is the following: Artsakh cannot give up its security.” He approached the negotiations in the Minsk framework as follows: “The negotiation process needs micro-revolutions, then mini-revolutions, and then a breakthrough”.

At the annual Munich Security Conference, in February 2020 (where he engaged in a debate with Azerbaijan’s President Ilham Aliyev), Pashinian unilaterally outlined six “Munich Principles,” to be counter-posed to the Minsk Group’s Basic Principles. He unveiled his principles shortly thereafter in Karabakh’s administrative center, Stepanakert, to a joint session of Armenia’s and Karabakh’s Security Councils, as “New negotiating realities to be created”: a) Armenian and Artsakh authorities hold identical views on the settlement of the Artsakh problem; b) Artsakh is entitled to be a full participant in the negotiating process; c) Artsakh and Armenia comprise a common security space, first and foremost regarding modernization of armament, [with] a new level of relations between the armed forces of Armenia and Artsakh; d) Democracy in Artsakh is many times higher than in Azerbaijan. This confirms that Artsakh and Azerbaijan can by no means be in the same political space; e) a competitive economy should provide the armed forces of Armenia and Artsakh with the necessary resources; f) We assume responsibility for the security of not only Armenia and Artsakh, but we also take a special responsibility for ensuring security in our region, as well as ensuring global security.

Between May and August 2020, Yerevan and Stepanakert took steps toward moving Karabakh’s administrative center to Shusha, a town of the highest cultural significance to Azerbaijan. The move seemed intended to preempt the return of Azerbaijani expellees to Shusha as envisaged in the Minsk negotiating framework.

On August 10, 2020, the 100th anniversary of the signing of the Treaty of Sèvres, Pashinian addressed a special session at the National Academy of Sciences in Yerevan to praise that never-implemented treaty, which had awarded then-nascent Armenia with large Turkish-majority territories. He invoked that treaty as historic justice; and although he stopped short of presenting territorial claims, Turkey took notice. The prime minister’s speech confirmed a certain image of Armenia’s public life as unduly fixated on the past at the expense of the present.

Yerevan’s accelerating departure from the Minsk framework and its Basic Principles attracted little international notice, and no censure in the run-up to the war. The US and French co-chairs seemed otherwise occupied, while Russia—playing solo at that stage—may have been content with a degree of controlled instability.

Pashinian’s government had come to power in 2018 from the streets in the form of a “velvet revolution,” supposedly to rule more democratically. This may actually be the case in comparison with the preceding regime, militarized and oligarchized, which had been led by representatives of the “Karabakh clan” for the last 20 years. Yet Pashinian’s government turned out to be more aggressive and rigidly uncompromising (as well as less professional) in comparison with the “Karabakh clan” of then-presidents Robert Kocharian and Serge Sarkisian. Those had at least stayed within the Minsk framework. Pashinian’s government, however, moved backward, toward a policy even older than Kocharian’s and Sarkisian’s presidencies—namely, that of unification (“Miatsum”) of Armenia and Karabakh. This militant attitude confirms the lack of a correlation between a democratic popular mandate and pacifist inclinations. Mass democracy can, just as well, encourage nationalist militancy.