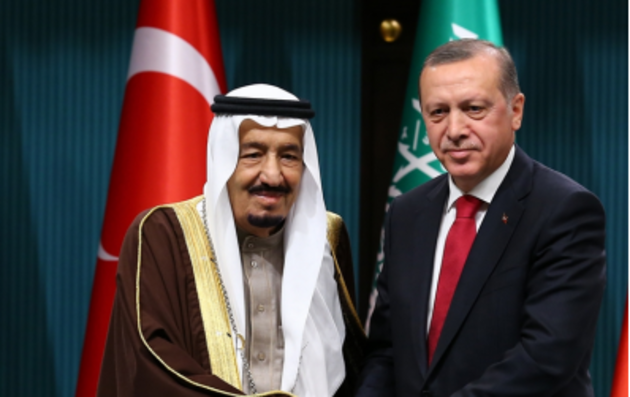 The winds of normalisation are blowing across the Middle East bringing calm to the Gulf and to ties between Turkey and Egypt. The latest rapprochement appears to be between Turkiye and Saudi Arabia, Turkish Radio and Television Corporation, TRT World writes.

With last year’s Gulf normalisation between Qatar, an ally of Turkiye, and the Saudi-UAE bloc, which enforced a strict blockade against Doha in 2017, tensions across the Middle East began de-escalating. The most recent sign comes after Turkish President Recep Tayyip Erdoğan’s announcement of his visit to Riyadh next month.

The Middle East’s two biggest economies have usually enjoyed cordial relations until the murder of Saudi dissident journalist Jamal Khashoggi in Saudi Arabia’s Istanbul consulate in 2018. The Saudis, including the country’s Crown Prince Mohammed Bin Salman, deny ordering the killing. Since then, many important developments across the Middle East have taken place from the killing of Qasem Soleimani to the US’ return to the negotiating table with Iran to bring the nuclear deal back on track.

As Washington signals that it will dial back its Middle East policy, the Saudis, a US ally, need a strong military like Turkiye to ensure its security.

Riyadh and Tehran have opposing policies across the region from the Yemen war to Lebanon. In Yemen, pro-Iran Houthis are fighting Saudi-led forces while the Shia group Hezbollah, a group that has close ties with Tehran, poses dangers to pro-Saudi political allies in Beirut.

Trade ties between Ankara and Riyadh have decreased in recent years due to the political tensions, but now both countries are seeking to develop their bilateral economic ties. Ankara also wants Riyadh to end an unofficial Saudi boycott of Turkish goods - a byproduct of the soured relationship.

Prior to the most recent rapprochement with Saudi Arabia, in 2020, Turkiye and Egypt made diplomatic efforts to ease their differences over the Arab Spring and the military coup in Cairo in 2013; and the UAE and Turkiye normalised relations after Crown Prince Mohammed Bin Zayed al Nahyan of Abu Dhabi made a visit to Ankara in November, meeting with President Recep Tayyip Erdoğan.

While Turkish-Saudi relations froze after the Khashoggi killing, President Erdoğan and Saudi King Salman continued to exchange messages, keeping a channel open. In July, Turkish Foreign Minister Mevlüt Çavuşoğlu met his Saudi counterpart Faisal bin Farhan, describing it as “a fruitful meeting”. In August, Ibrahim Kalin, the Turkish presidential spokesman, announced some positive developments which could end the stalemate between the two states. In the fall of 2021, communication between the two states got better as Çavuşoğlu indicated that “if both sides take steps, our relations with Saudi Arabia will return to normal.”

When Erdoğan visited Qatar last month, there were rumours that the Saudi crown prince and the Turkish president could meet, but the meeting never materialised. “Turkiye is closer to opening up to Saudi Arabia than Iran, and there may be a gradual rapprochement,” said Hisham Al Ghannam, a Saudi analyst, in December.

Overall, MBS’ welcoming of Erdoğan in February shows that communication has evolved to a level where both sides can sort out their differences.

What can Saudi-Turkish normalisation offer?

The sour relations between the two have not benefited either country. Neither financially nor politically. By relaunching their relations, both the Saudis and the Turks could deepen the normalisation process across the Middle East.

It could also help both countries develop their connections in the sector of military technology. Saudis are the world’s third biggest spender on military expenditures according to 2018 numbers and Turkiye has a growing and vibrant defence industry, producing its own indigenous drones among other things. Turkiye sells its drones to several states from Ukraine to Azerbaijan, Libya and some other African states. Turkish drones played a significant role in Azerbaijan’s victory against Armenia over the Karabakh region. In other conflicts like the Libyan civil war, Turkish drones also showed their effectiveness.

While the UAE, one of the Gulf’s most influential states, has normalised relations with Israel, the Saudis are in no mood to do the same thing which might be forcing them to seek a partner that can help secure their interests in the fragile region.

As the Biden administration has still been reluctant to reach out to Riyadh and reorganise relations on a better footing, tensions between Tehran and Riyadh continue despite recent reconciliation efforts. As a result, Riyadh and Ankara can cooperate on common security interests, particularly in the area of military technology. “Improving relations with Turkiye presents a reasonable option to help Saudi Arabia break out of the current spiral, especially if the US and the new Iranian government reach an agreement regarding the implementation of the JCPOA,” writes Ali Bakir and Eyup Ersoy, two experts on Middle East affairs.