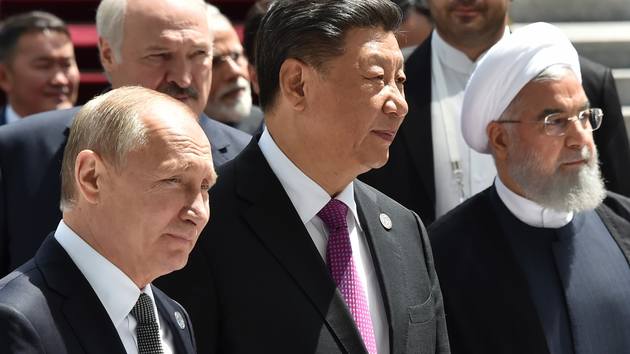 Iran is looking to Russia and China for diplomatic support amid President Joe Biden's push to revive the Joint Comprehensive Plan of Action, plus Washington, D.C.'s refusal to lift sanctions imposed by former President Donald Trump that have choked the Iranian economy. As Newsweek writes, Russia and China—both JCPOA signatories—backed Tehran through Trump's "maximum pressure" campaign, offering Iran export lifelines and diplomatic support. Since Biden has come into office, Moscow and Beijing have demanded his "unconditional" return to the JCPOA.

The U.S. and Iran are stuck in a negotiating stalemate. Iran says it will not scale back its nuclear program in line with the JCPOA until all Trump-era sanctions are lifted. But Biden has ruled out easing the measures until Tehran walks back its expanded nuclear activities.

As the two sides wait for the other to blink, Iran is fortifying ties with Russia and China, both of which are competing with the U.S. for influence and business across the world. For all three, undermining the U.S. and its democratic allies has value.

Reuters reported Friday, for example, that the three nations are among a group of 16 nations—also including North Korea, Syria and Cuba—pushing to form a coalition at the United Nations to push back against unilateral use of force or sanctions, a thinly-veiled effort to weaken U.S. foreign policy.

With few reliable allies, closer ties with Moscow and Beijing would be a diplomatic boon for Tehran, and its struggling economy would benefit from the wealth both nations could bring. Indeed, Iran is increasingly pivoting east to take advantage of China's riches, and is set to be a significant stop on Beijing's mammoth Belt and Road initiative.

"The Islamic Republic of Iran regards the Russian Federation as a powerful neighboring country and its friend on the basis of 'mutual cooperation and respect,'" the statement read, adding Iran is "willing to further enhance its relations" with President Vladimir Putin's regime "in all fields."

"The cooperation between the two countries for the fulfilment of common interests has gone beyond the level of bilateral relations, has entered the area of contributing to the regional and international security, and has become stronger more than ever," the Foreign Ministry said.

Ties with Russia helped Iran secure access to the Sputnik V coronavirus vaccine, while Tehran continues development on its own indigenous treatments. Iran was among the first countries to be ravaged by the virus last year, and has repeatedly accused the U.S. of hampering its anti-viral efforts through ever-tighter sanctions.

Iranian and Russian officials also met last month to hold talks on the International North-South Transport Corridor, a trade project connecting India and Russia via Iran, Azerbaijan and other nations.

Foreign Minister Javad Zarif said last month he hopes to soon finalize a 25-year economic cooperation plan with China. The agreement "is not far away," Zarif said, with the deal set to hand Beijing a valuable strategic foothold in the Middle East and West Asia.

Iran, Russia and China are also expanding military cooperation with joint drills, for example the combined Russian-Iranian naval exercises in the Indian Ocean held last month. Tehran is also likely to expand arms purchases from both Moscow and Beijing thanks to the lapse of the United Nations arms embargo on the country imposed as part of the JCPOA.

Closer cooperation with Russia and China plays into the Iranian framing of the U.S. as an empire in terminal decline, increasingly unable to subjugate foreign nations. President Hassan Rouhani said last month that the U.S. "is truly declining, and this has distressed and stunned some of their allies in the region."