Iran and Venezuela stand against U.S. together 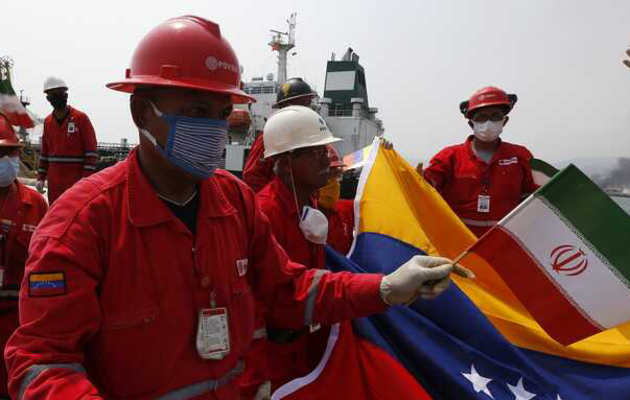 Throughout the covid-19 pandemic, the Trump administration has relentlessly pursued its “maximum pressure” campaigns against Iran and Venezuela, heaping on more sanctions in the apparent hope that one or both regimes would crack under the combined strain of the virus and economic strangulation. Washington Post reports in its article Maximum pressure on Iran and Venezuela has brought them together to embarrass the U.S. that yet the most visible result of the policy to date has been to bring the two nations together to orchestrate an embarrassing display of U.S. impotence.

Last Tuesday, the last of five Iranian tankers arrived in Venezuela, sailing past U.S. warships deployed in the Caribbean. They were delivering an estimated 60 million gallons of gasoline to fuel-starved Venezuelans, in defiance of U.S. sanctions on both countries. Secretary of State Mike Pompeo derided the delivery as “just enough gasoline for a couple of weeks.” But that understates the deal between the two countries: Iranian aircraft have also delivered parts and technicians to repair Venezuela’s crumbling refineries, and the government of Nicolás Maduro is believed to have repaid Tehran with gold bars worth between $500 million and $700 million, according to several reports.

The Trump administration tried to stop the shipments with threats of sanctions: Two additional, Liberian-flagged tankers were induced to turn around. But it elected not to intercept the Iranian ships after the regime of Ayatollah Ali Khamenei vowed to retaliate. Iran’s capacity to attack oil shipping in the Persian Gulf months before the presidential election was evidently enough to deter President Trump.

The result was a propaganda victory for the Maduro and Khamenei regimes, which show no signs either of yielding to U.S. pressure or succumbing to domestic unrest. More cooperation between them seems to be in train: Mr. Maduro said he would soon visit Tehran, and he recently appointed Tareck El Aissami, a key ally of Iran, as oil minister.

Adm. Craig Faller, the head of the U.S. Southern Command, said last month that recent Iranian contacts with Venezuela had included the Quds force, the elite military unit formerly commanded by Qasem Soleimani, the general killed in a U.S. drone strike in January. Adm. Faller said Iran’s objective was to “gain positional advantage in our neighborhood in a way that would counter U.S. interests.”

U.S. officials say they will not tolerate systematic Iranian supplies of gasoline to Venezuela, and it’s not clear Tehran will have the capacity to continue them as its pandemic lockdown eases and Iranians return to their vehicles. But the strengthening alliance between the two states illustrates the downside of Trump policies that aim for regime change, but aren’t able to deliver it — or even to contain the inevitable blowback.

How Iran gets oil to Venezuela

Venezuela recovers its oil production thanks to Iran, China's help