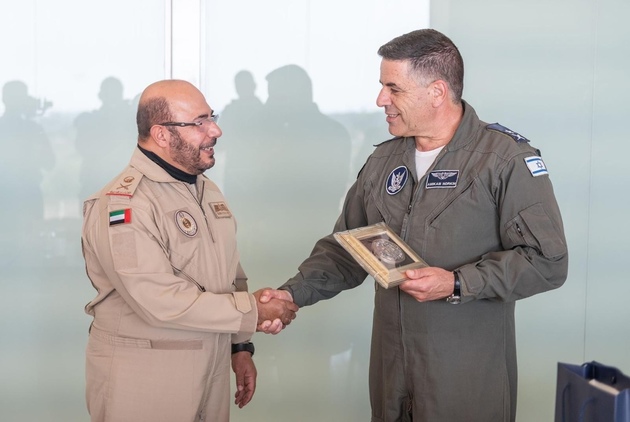 The Israeli air force (IAF) conducted its fifth Blue Flag drill this month, with for the first time the participation of squadrons and fighter pilots from the United States, United Kingdom, Germany, Italy, Greece, France and India. In another first, the chief of the Emirate air force, Vice Marshal Ibrahim Nasser Mohammed al-Alawi, arrived in Israel to observe the exercise, joining the heads of air force commanders from 10 other countries. Al Monitor reports that Alawi was received by his Israeli counterpart, Maj. Gen. Amikam Norkin, at the Palmachim air force base in central Israel, where they reviewed an honor guard.

While senior officers from Arab countries have visited Israel in the past, their visits were always clandestine. This time, the Israel Defense Forces (IDF) issued photos showing the Emirati guest reviewing the honor guard alongside Norkin, who then pinned the exercise ribbon on the lapel of his colleague. The visuals were aired on Israeli media, but their target audience was 1,700 kilometers (1,050 miles) to the east, in Tehran.

“Imagine an Emirati squadron taking part in the next Blue Flag exercise, not just its air force commander,” a senior diplomatic source told Al-Monitor on condition of anonymity. “Or, alternatively, that in two weeks, two months or two years you suddenly see an IAF squadron drilling in the UAE. You can imagine what effect this would have in Tehran, right?” 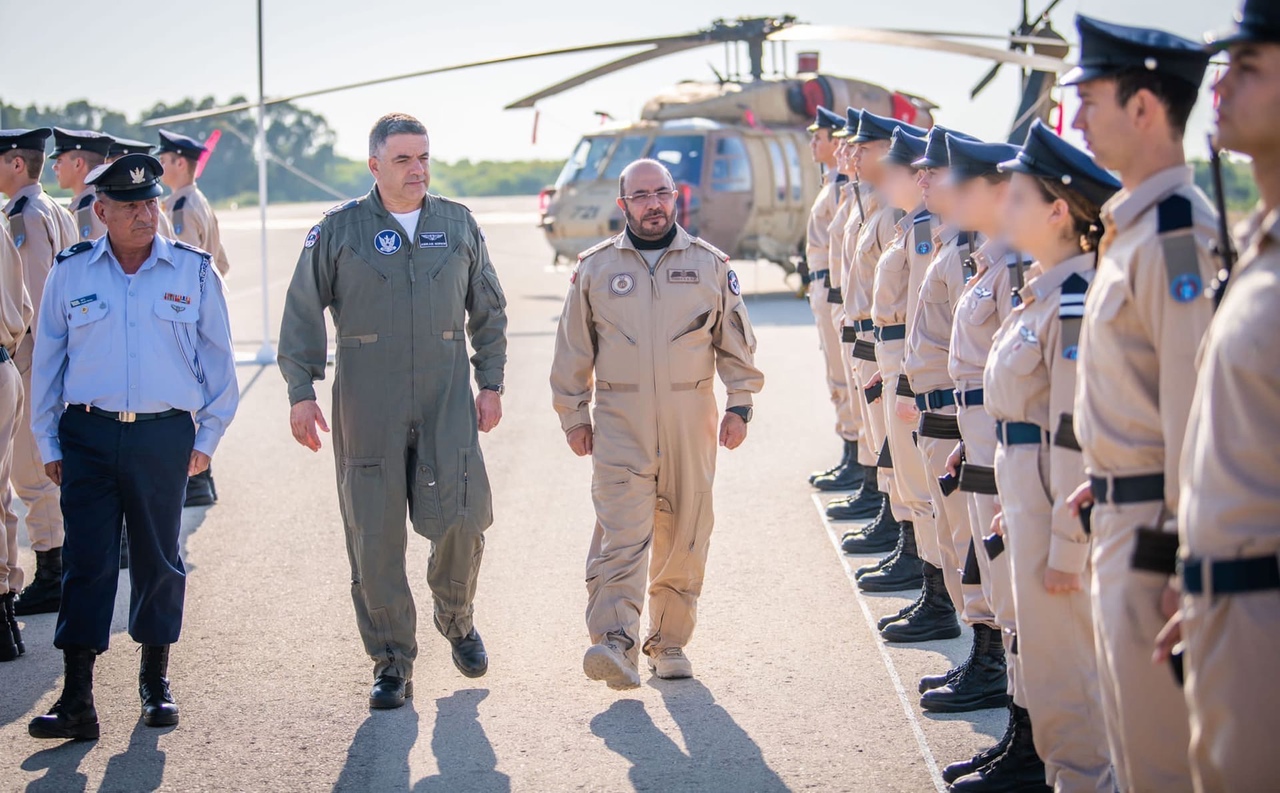 Al-Monitor has reported often in recent years on Iran’s efforts to encircle Israel — its involvement and entrenchment in Syria, its control of Lebanon through Hezbollah, its attempt to create a presence on the Syrian Golan Heights, its influence on Hamas and Islamic Jihad in the Gaza Strip, its potential use of Yemen as a launchpad for missile attacks against Israel, and more. What has evaded the spotlight, so far, is Israel’s successful and no less interesting effort to encircle Iran, which behind closed doors is being described as a “diplomacy of encirclement."

A Western diplomat serving in our region recently told Al-Monitor on condition of anonymity, “The Iranians are diligently monitoring these developments, which are prompting grave concern In Tehran. They see Israel reaching Bahrain, ensconced in the Emirates, talking to the Saudis. They see Israel in Azerbaijan. They understand that Israel is much closer than they thought.”

According to reports last week, Israel Defense Forces (IDF) Chief Lt. Gen. Aviv Kochavi has instructed the IAF to resume exercising for a possible attack in Iran. Other reports say the government has allocated 5 billion Israeli shekels ($1.5 billion) to upgrade the so-called military option that Israel has been entertaining for the past 11 years. Brig. Gen. Amir Lazar, head of the IAF’s Air Division, told reporters during the exercise that the IDF is shifting its starting point and focusing more on looking to the east. Israel must not forget that the air force has the basic capabilities required for action in the third circle, so that the IDF is not starting from scratch, he noted.

The “third circle” is the term Israel uses for states such as Iran, which do not share a border with Israel and are located two countries away from the IAF, which nonetheless enjoys a significant strategic edge over all its competitors in the region. Israel has greatly amplified such signals in recent days, in apparent response to US foot-dragging about its willingness to consider a credible military option designed to bring the Iranians back to the negotiating table and exert pressure on them to compromise.

For example, the military censors allowed the publication of reports that Iran was supplying Syria with air defenses and that an Iranian anti-aircraft battery recently tried to intercept IAF jets during an attack on targets in Syria. These batteries, according to the reports allowed for publication, were supplied by Iran and operated by local crews. The Israeli planes reportedly evaded the missiles fired at them and destroyed the battery. Meanwhile, attacks in Syria continue, with another raid attributed to Israel on the night of Oct. 24-25 — this time against targets on the Syrian Golan Heights. Israel has not claimed responsibility for the attack. 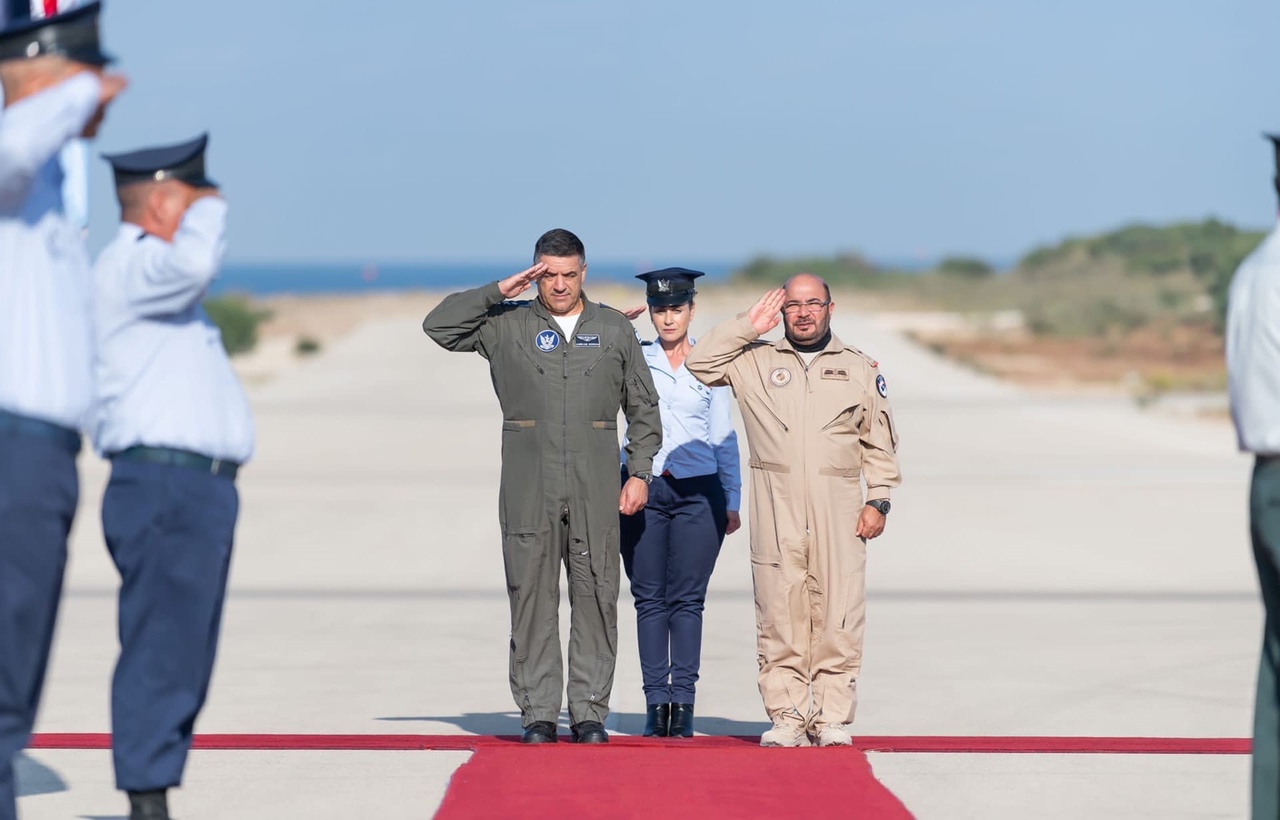 The relative long distance between Israel and Iran greatly limits Israel’s ability to deal a significant blow to Iran’s nuclear project. Contrary to nuclear projects launched at the time by Iraq’s Saddam Hussein and Syria’s Bashar al-Assad, which Israel, say foreign reports, nipped in the bud, the Iranian capability is not based on a single nuclear reactor. Iran has spread its uranium enrichment facilities over extensive areas and heavily fortified them deep underground. These conditions greatly impact Israel’s military option, sophisticated though it may be, to crush Iran’s nuclear ambition.

However, these conditions would change considerably if Israeli attack jets could land — before or after their strikes — far closer to Iran. Israel’s creeping movement closer to Iran, i.e., the strategic alliances it is forging with Iran’s neighboring states, are raising the level of Iranian anxiety to new heights. “Israel has no choice,” a diplomatic source in Jerusalem told Al-Monitor on condition of anonymity. “The Americans are not really on the same page as we are, they continue to believe in diplomacy and diplomacy alone. Despite the latest declarations about other options, we understand that we are the only ones currently able to present a real, credible military option.”