The Azerbaijani Cultural Center of the International Association of Israel-Azerbaijan ‘Az-Iz’ held a meeting dedicated to one of the darkest pages of Azerbaijan’s history. Wherever natives of Azerbaijan live now, they will never forget the night of January 19th, 1990, when tanks which Baku didn’t see even during the Great Patriotic War were driven along the streets of the sleeping city. Indiscriminate shooting was committed on the houses and streets of Baku; people were killed in their own hoses. Tanks crushed people on the streets.

It was the time of the beginning of the Soviet Empire’s dissolution, when the genie was let out of the bottle by the policy of freedom and freedom of speech, and the genie didn’t want to stay under the regime which oppressed the countries and people for more than 70 years. All Soviet republics felt freedom and wanted to be free from the Leninist-Stalinist regime; but the agonizing empire didn’t want to let its “slaves” go without blood. The trigger of the post-Perestroika processes in Azerbaijan was the Armenian-Azerbaijani Nagorno-Karabakh conflict, which was escalating at that moment. Thousands of refugees appeared in Azerbaijan due to it – ethnic Azerbaijanis who were expelled from their lands by Armenian nationalists.

Hundreds of innocent people died or were injured in the chaos which stayed in the people’s memory as Black January. These people were residents of Baku and guests of the city of various nationalities – Azerbaijanis, Russians, Jews, Tatars, Ukrainians, Lezgins, Kazakhs, and so on. The Azerbaijani people remember them as martyrs who gave their lives for the freedom and independence of Azerbaijan.

Relatives of the people who became victims of the tragic events live in Israel today. The victims left behind small children, husbands and wives, mothers and fathers. “These were young people who only started their lives; they didn’t know the beauty of life and turned into angels, leaving us a right for memory which is the only way we can express our gratitude to them. We will preserve the memory of young Vera Besantina forever. She was killed by a sniper in her home. A young doctor Alexander Markhevka was killed at the moment he was saving the life of a dying young man. Jan Meyerovic was a victim of a tank’s shooting when he was driving the old mother of his friend to the airport,” Yegyan Salman, the Director of the Azerbaijani Cultural Center, told the audience. 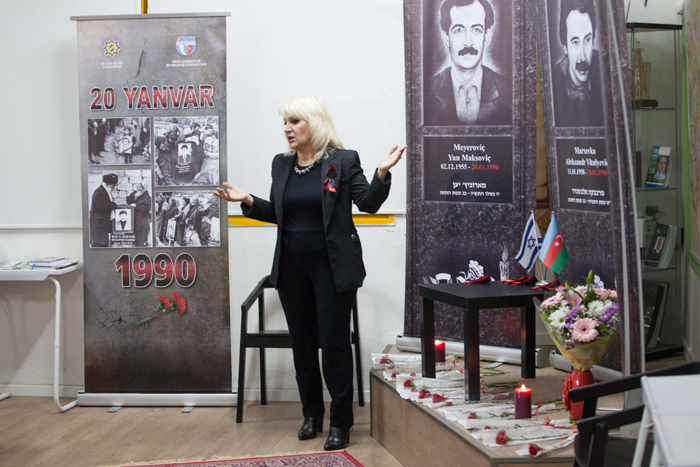 Baku residents who were witnesses of the dreadful days gathered in the AzIs center to remember those days and pay tribute to the innocent victims. Rauf Agalarov, a member of the Board of Directors of the AzIs International Association, Leo Abramov, a poet, Boris Dobin, a Baku resident, the author of photos of the Black January events, residents of Afula Tofik Alikbekov and Peter Rishal, Kiryat Jama, a member of the City Council, Margarita Kozakova, Svetlana Cherkasova, the head of the Department of Municipal Absorbation of Afula, and Lev Spivak, the Director General of the AzIs Association, shared their memories of the days of 1990. Rabanit Shendel Gurevic read the Yizkor prayer in honor of all the victims of the Baku events of January 20th. The mourning evening was ended with a moment of silence. 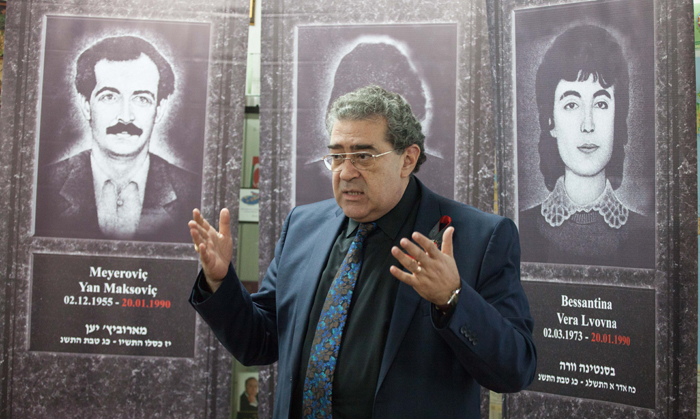 Two days before that, Jerusalem paid tribute to the victims of Black January. Lev Spivak, the Director General of Az-Iz, spoke about the awful events which took place 26 years ago at an evening organized by the head of the Jerusalem office of AzIs, Alexander Agranovsky, together with the Jerusalem Press Club. Maya Speranskaya, aunt of doctor Alexander Sarkhevka, was present there.