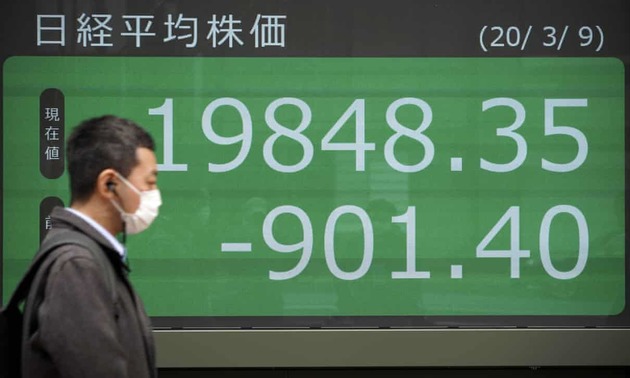 Stock markets in Europe and the US are braced for their biggest falls since the 2008 financial crisis after the trading week began with panic selling amid the double threat of a coronavirus-driven global recession and an oil-price war. The Guardian reports in its article Panic hits global markets amid threat of coronavirus and oil price slump that the FTSE 100 was projected to plunge by 6.3% when trading begins on Monday, while the Dow Jones industrial average was on course to lose 4.9% in New York.

It follows huge losses on Asian markets on Monday, where fears about the worsening worldwide economic slowdown were exacerbated by the shock decision by Saudi Arabia over the weekend to increase oil production in an attempt to drive competitors such as Russia and the US out of the market.

The price of Brent crude oil fell nearly 30% to $31.14 on Monday, its biggest single fall since the start of the first Gulf war in 1991. Some experts predicted it could fall even further unless the Saudis and Russians returned to the bargaining table.

“I think all forecasts are out the window,” said Jonathan Barratt, chief investment officer at Probis Securities in Sydney. “It seems like a race to the bottom to secure order(s).”

The turmoil on international markets came as the outbreak continued to deepen around the world and bring more restrictions on movements from governments:

Italy was plunged into chaos as the number of fatalities increased by more than 50% to 366 and government plans to lock down large parts of the country’s north, or about 25% of the population, were leaked to the media.

The stranded cruise ship Grand Princess was expected to finally dock in Oakland, California on Monday as arrangements were made for its 3,500 crew and passengers, some of whom have contracted the virus. The number of deaths in the US rose to 21 with more than 550 confirmed cases.

Saudi Arabia cordoned off the oil-rich, predominantly Shia region ofQatif, suspended air and sea travel to nine countries and closed schools and universities as the number of cases in the kingdom continued to increase.

Organisers of the Australian Grand Prix, set to kick off the Formula One season in Melbourne on Sunday, said there was “no chance” the race would be called off despite rising concerns about the event’s large crowds facilitating the spread of the disease.

As concern grew over a possible recession in Australia as a result of the virus, a wave of selling on stock markets in Asia Pacific was the worst since the collapse of Lehman Brothers in 2008 heralded the onset of the global financial crisis.

The ratings agency Moody’s said on Monday that the risk of a global recession was rising as the spread of the coronavirus causes a simultaneous supply and demand shock throughout the world economy.

Joachim Fels, the chief economist of the world’s biggest bond trader, Pimco, said in a note to clients that a recession in the US and Europe was a “distinct possibility”.

“The worst for the economy is yet to come over the next several months,” he said, according to Bloomberg, citing the impact of the virus on demand and supply, weaker Chinese manufacturing and a hit on the global tourism industry.

The OECD said last week that a severe outbreak of the coronavirus could cut global growth by 0.5 to 1.5%. The International Monetary Fund and the World Bank said they were setting aside billions of pounds for developing world countries to support ailing health systems and offset the worst of the impact from falling commodity prices.

The accountants BDO said a dramatic rebound in optimism among British businesses since the beginning of the year could be jeopardised by a more severe outbreak of the virus. It said the services sector enjoyed the biggest rise in optimism last month following the end of the Brexit stalemate.

The report said the rise in confidence reflected the underlying improvement in business conditions as a result of a more certain political and economic outlook. It follows three months of marginal increases in optimism, as businesses appeared to be in wait-and-see mode in the immediately after the general election, the firm said.

Kaley Crossthwaite of BDO LLP said: “We have just witnessed the most significant uplift in business optimism in 10 years, and the impact of greater political and economic certainty brought by a new majority government should not be underestimated.

“However, businesses will now be spending the coming weeks focused on mitigating the uncertainty caused by coronavirus.

“The next month will be crucial in determining whether this optimism can remain, or if the ‘Boris bounce’ will be brought back down to earth by the impact of the coronavirus outbreak.”