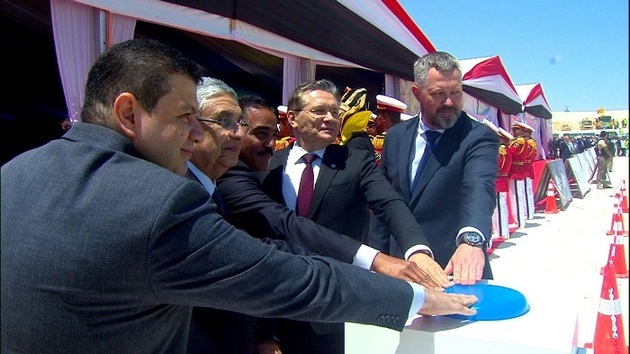 This week, the Russian-Egyptian delegation headed by the Director General of the State Atomic Energy Corporation Rosatom Alexei Likhachev and the Minister of Electricity and Renewable Energy of Egypt Mohamed Shaker started work on pouring concrete into the foundation slab of the power unit No. 1 of the El-Dabaa NPP.

The Russian state corporation Rosatom is building Egypt's first nuclear power plant in the Matrouh Governorate on the Mediterranean coast 300 kilometres to the northwest of Cairo. The nuclear power plant will consist of four power units with a capacity of 1200 MW each with the VVER-1200 type reactor. In Russia, there are four units with reactors of this latest generation: two reactors each at the Novovoronezh and Leningrad nuclear power plants. Outside of Russia, in November 2020, at the Belarusian NPP, one power unit with a VVER-1200 reactor was connected to the grid.

NPP in Egypt is being built in the framework of the contracts that entered into force on December 11, 2017, according to which the Russian side will not only build the plant but will also supply nuclear fuel for the entire life cycle of the NPP, as well as help in training personnel and support the operation of the plant during the first 10 years. As part of another agreement, the Russian side will build a special storage facility and supply containers for spent nuclear fuel.

Russia’s state-controlled Rosatom began construction of Egypt’s first nuclear power plant as the North African nation balances its ties with the Kremlin and western allies who have sanctioned Moscow over its special operation in Ukraine.

As Bloomberg writes, Rosatom is the world’s biggest supplier of nuclear fuel and reactors, and hasn’t been sanctioned by the US or Europe. Russia has a history of pursuing large-scale energy projects in Egypt. The Soviet Union helped build the Aswan High Dam in the 1960s. Russian President Vladimir Putin and his Egyptian counterpart Abdel-Fattah El-Sisi were present as the countries signed a deal for the reactors back in 2017, when the cost was put at an estimated $30 billion, much of which was due to be financed with a loan from Moscow.

Egypt has developed stronger economic ties with Russia since El-Sisi became president in 2014, while retaining historic links to partners in the West. This year, it has participated in the St. Petersburg International Economic Forum and bought substantial amounts of wheat from Russia, while signing a deal with Israel to boost gas sales to the European Union as the bloc seeks to lower its reliance on energy imports from Moscow.

The Rosatom project was delayed after the 2015 bombing of a Russian airliner over Egypt killed 224 holidaymakers. Flights between the two countries only resumed last year, providing a boon for Egypt’s tourist industry which had previously attracted large numbers of Russian visitors.

Russia’s special operation in Ukraine and the subsequent US and European sanctions have done little to discourage international interest in the company’s technology. In addition to Egypt, the Kremlin-controlled company has advanced projects in Hungary and Myanmar since the conflict began. In 2020, Rosatom said it had picked three Egyptian companies to help in the construction of the plant located on the Mediterranean coast.

Putin and President of Egypt discuss situation in Ukraine

Presidents of Russia and Egypt meet in Sochi