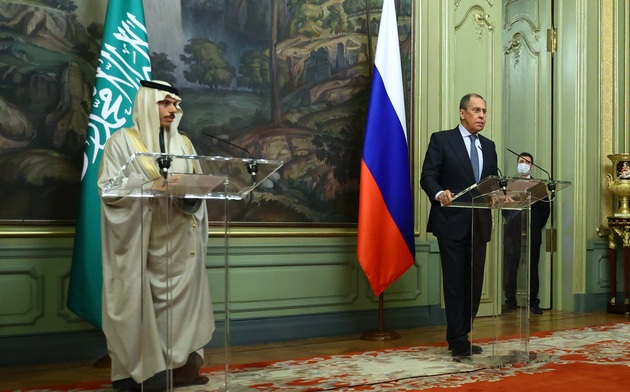 The cooperation between Russia and Saudi Arabia within OPEC+ "not only contributed to the stabilization of the energy products markets but also protected the global economic system from the dangerous effects that could have happened from instability in these markets," bin Farhan said in a joint press conference with his Russian counterpart Sergey Lavrov in Moscow, S&P Global Platts writes in the article Saudi cooperation with Russia in OPEC+ helped stabilize oil markets: foreign minister. "We value the cooperation we have with our partners within OPEC+, on top of them Russia, and we look forward to continued cooperation."

The OPEC+ alliance, led by Saudi Arabia and Russia, decided in December after days of heated negotiations to ease their stringent quotas by a collective 500,000 b/d for January, instead of the originally scheduled 2 million b/d tapering.

Sources involved in the talks had told S&P Global Platts that Russia, the UAE and Kazakhstan were among the countries advocating for quotas to be relaxed, optimistic about the pace of the market's recovery and concerned about leaving an opening for US shale producers to fill any supply gaps.

For February and March, Russia and Kazakhstan were permitted slight increases, while Saudi Arabia, which has consistently opposed arguments in favor of raising production, announced it would institute a voluntary unilateral 1 million b/d cut below its quota. All other countries will maintain their January production levels.

"We closely coordinate our actions with Saudi Arabia on global hydrocarbons markets, including within the framework of OPEC+, which is having a stabilizing impact on oil prices," Lavrov said at the press conference.

Russian Deputy Prime Minister Alexander Novak, who is representing his country in OPEC+ meetings, called Saudi Arabia's surprise cut "a New Year's gift" to the oil market. Saudi Arabia will continue to work to secure oil flows to the global economy, bin Farhan said. "The kingdom has always been a key player in supporting oil market stability in general and will always seek to maintain this stability and guarantee the smooth flows of energy products to support the global economy," he said.

The Saudi cut has helped boost oil prices to an 11-month high, with front-month Brent futures surpassing $57/b on Jan. 13 only to retreat later in the day.

Crude oil futures edged lower during mid-morning trade in Asia Jan. 14 as a bullishness from a draw in US crude inventories was offset by indications of weak fundamentals in downstream oil markets and a stronger US dollar.

The new OPEC + agreement locks in quotas through the first quarter, with the group's next meeting set for March 4 to set April levels.