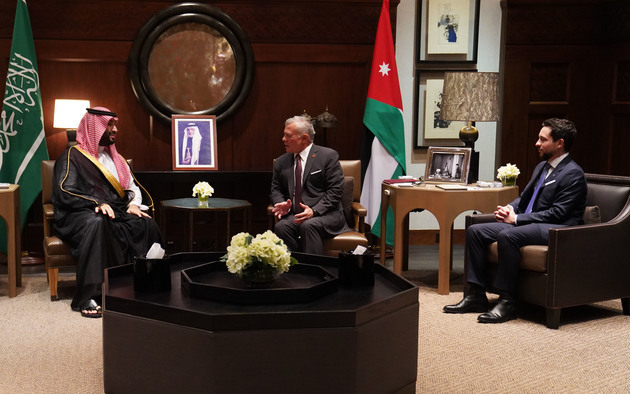 Crown Prince Mohammed bin Salman’s visit to Jordan this week was an important milestone in Saudi-Jordanian strategic bilateral ties, which date back to 1933. Throughout this long relationship, the leaderships of the two neighboring countries have coordinated policies and positions and collaborated to safeguard the stability of the region, Arab News writes.

This was the crown prince’s second visit to Jordan since 2016. Back then, King Abdullah was sure to share his own vision for expanded regional cooperation in the areas of security, economic development and geopolitical challenges with the young prince, who had his own ambitious plans for his country and the region. Under the guidance of King Salman, relations between Jordan and Saudi Arabia continue to grow. Jordanians will never forget how the king called for a summit in Makkah in June 2018 to stand by economically stricken Jordan. The meeting, also attended by then-Kuwaiti Emir Sheikh Sabah Al-Ahmad Al-Jaber Al-Sabah and Sheikh Mohammed bin Rashid Al-Maktoum, vice president and prime minister of the UAE and ruler of Dubai, resulted in a $2.5 billion aid package for Jordan.

The year before, in March 2017, King Salman paid an official visit to Jordan on the eve of the convening of an Arab League summit at the Dead Sea. The visit resulted in a renewed Saudi commitment to broaden its investments in Jordan. Saudi investments have contributed to creating jobs, improving infrastructure and supporting many promising startups in Jordan.

The crown prince’s visit this week, as part of a regional tour, came at a delicate time for the region. Talks with King Abdullah covered regional security, the Yemen crisis, Syria, the Iran nuclear deal, food security challenges in light of the crisis in Ukraine, and the Palestinian question. Senior Jordanian officials confirmed that the two countries are in agreement on these issues and more. Saudi Arabia is bolstering its position as a key regional power and its role in the stability and prosperity of the region is paramount - Osama Al-Sharif

Saudi Arabia has stood firmly alongside King Abdullah following the sedition episode of last year. The Kingdom has also repeatedly backed the king’s custodianship of Al-Aqsa Mosque in East Jerusalem.

The royal visit also gave a boost to the $3 billion Saudi Jordanian Investment Fund, established in 2017, which in recent months has been signing agreements to invest in small, medium and strategic companies and ventures in Jordan. In March, a bilateral agreement worth more than $1 billion was signed by the Makkah Chamber of Commerce and Industry and its Amman counterpart focusing on developing economic relations between the two cities.

According to Jordanian figures, Saudi Arabia is one of the biggest investors in the Hashemite kingdom, with total investments exceeding $10 billion in various sectors, including transport, infrastructure, energy, finance and real estate. Furthermore, Saudi Arabia is Jordan’s top trading partner, with the two-way trade exchange between the two countries amounting to $4.1 billion in 2020. Added to that, there are about 250,000 Jordanian expatriates in Saudi Arabia whose remittances contribute about 6 percent of Jordan’s gross domestic product.

The crown prince’s visit to Jordan followed the launch two weeks ago of Amman’s ambitious Economic Modernization Vision — a 10-year road map for economic development worth more than $57 billion, most of which will come from the private sector and foreign investors. There is no doubt that Jordanian businessmen and officials are keen to know more about Saudi Vision 2030, launched by the crown prince in 2016, which has made extraordinary strides in its plan to diversify the Kingdom’s income and open up to the world.

Aside from the economic aspects, the talks touched on the historic summit that Saudi Arabia will host next month, which will bring together the leaders of the GCC, Jordan, Egypt and Iraq, along with US President Joe Biden. And in addition to discussing the US’ role in the region, Iran’s regional agenda and the intra-Arab security network, King Abdullah and the crown prince looked into widening regional cooperation, especially between Jordan, Egypt, Iraq and Saudi Arabia in the areas of renewable energy, electricity exchange, food security and investments in high-tech industries. King Abdullah reiterated Jordan’s position on wanting to keep the resolution of the Palestinian issue as a regional and international priority.

Saudi Arabia is bolstering its position as a key regional power and its role in the stability and prosperity of the region is paramount. Riyadh realizes that Jordan’s stability is important to its own. With a long common border, the two countries have elevated cooperation in fighting extremists and cross-border drug smuggling, with the latter becoming a clear and present challenge to both countries.

Eight Middle East heritage sites you should know about

GCC Railway: a train across a fractured Gulf?