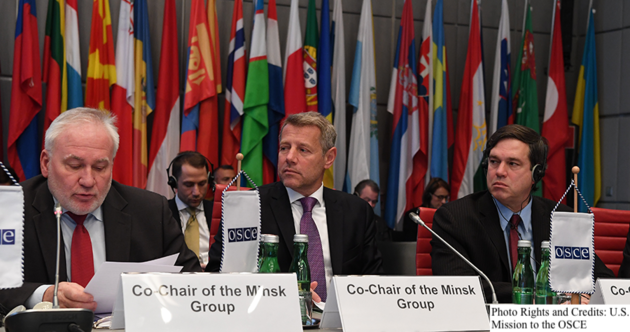 After the Second Karabakh War ended, the question arose of the OSCE Minsk Group’s role. For many years, the organization had been unsuccessfully engaged in the settlement of the conflict at the diplomatic level. Vestnik Kavkaza invites you to read an article by the former US Co-Chair of the OSCE MG, Richard Hoagland, published by The International Conflict Resolution Center.

The opinion of the author may not coincide with the position of the editorial board.

The war returned to Baku after 30 years seven Armenian-occupied territories and part of Nagorno-Karabakh itself.  The answer about the future of the Minsk Group depends on which side you ask.  Yerevan is clear that it sees the continuation of the Minsk Group as essential for determining the final status of Nagorno-Karabkah.  Baku is equally firm in the other direction, asserting that Nagorno-Karabakh is an integral part of Azerbaijan and always will be.  This is the conundrum that the Minsk Group has faced almost from its beginning – radically opposed positions that fundamentally do not budge.

The Minsk Group itself is composed of the following nation-state members of the OSCE:  Armenia, Azerbaijan, Belarus, Finland, Germany, Italy, Sweden, and Turkey, as well, on a rotating basis, the Minsk Group troika:  France, Russia, and the United States. The current co-chair representatives are Ambassador Stephane Visconti of France, Ambassador Igor Popov of Russia, and Andrew Schofer of the United States.  On a day-to-day basis, they are led by the Personal Representative of the OSCE Chairman-in-Office, the superb and deeply knowledgeable Polish diplomat, Ambassador Andrzej Kasprzyk, who has been in that position since 1996.

Having recently retired after 30 years in the State Department, I was asked to return to service as the interim U.S. Co-Chair for the Minsk Group from January through September 2017 because the previous U.S. Co-Chair had unexpectedly retired to accept a job in the private sector.  Although I had never served as a U.S. diplomat in Armenia or Azerbaijan, the South Caucasus was not terra incognita to me.  I had been the Office Director for the Caucasus and Central Asia in the State Department and in that position had travelled fairly frequently to the South Caucasus countries.  And then, after several ambassadorships in Central Asia, I was subsequently the Principle Deputy Secretary of State for South and Central Asia.  In general, I had spent a good chunk of my diplomatic career at various postings in the former Soviet Union which gave me at least a general understanding of the post-Soviet conflict in Nagorno-Karabakh.

To be honest, when I was offered the position of interim U.S. Co-Chair, I hesitated a bit at first.  Why?  Because within the State Department that position was not seen as particularly “career enhancing.”  To be frank, it was usually occupied by a diplomat in “a parking position,” i.e., waiting for a promised full-scale ambassadorship to become available, or was filled by a soon-to-retire diplomat who needed a bit more time to fulfill the requirements for retirement.  Nevertheless, I was intrigued by the opportunity to learn, on the ground, about an international issue to which I had paid scant attention in the past and to have the opportunity to travel into Nagorno-Karabkah itself, which is very rare for any American citizen.  And so I said, “Sign me up!”

On every trip to the region, usually about every six weeks (in the pre-Covid world), Ambassador Kazprzyk and we three Minsk Group Co-Chairs would meet with the most senior officials of both Armenia and Azerbaijan in their capitals and usually travel by road from Armenia though the occupied territories into Nagorno-Karabakh itself to meet with the officials in Stepanakerk, the capital of the self-proclaimed Republic of Artsakh.  From time to time, we travelled to Moscow, Brussels, and other capitals to brief the interested governments on our work and on the status of the Nagorno-Karabakh conflict.

We stayed in five-star hotels where we were usually assigned suites on the executive floor that gave us access to a private dining room and full bar at no additional expense.  We always sought out the best restaurants in the cities where we found ourselves.  We lived well while we showed the OSCE flag and reminded Baku and Yerevan that the Minsk Group exists.  But to be blunt, very, very little ever got accomplished.

Over the years, the OSCE had formulated the Madrid Principles, a roadmap for the final resolution of the Nagorno-Karabakh conflict that would end in self-determination by the residents of Nagorno-Karabkah itself.  During the period that I served as the U.S. Co-Chair, Russian Foreign Minister Sergei Lavrov revealed his own plan to resolve the conflict, rather similar to the existing Madrid Principles, that immediately became known informally as the Lavrov Plan, even though we were cautioned to call it simply a “plan on the table.”

When the so-called Lavrov Plan was released, I asked my excellent colleague, the Russian Co-Chair Ambassador Popov, if the Kremlin would really agree to implement it, should Yerevan and Baku buckle and accept it.  His candid reply?  “Of course not.”  More than anything else, this made clear to me that Nagorno-Karabakh is not just a bilateral problem between Armenia and Azerbaijan.  In reality, it’s a trilateral issue with Russia playing a key, perhaps even decisive, role.

Nagorno-Karabkah is one of the so-called prolonged conflicts, sometimes called frozen conflicts, of the post-Soviet space, the others being Abkhazia and South Ossetia in Georgia, Transnistria in Modova, and the regional mess in eastern Ukraine.  Although each of these conflicts has its own historic origin and is complex in its own unique way, the unifying factor is that Russia is by far the best placed to bring a conclusion to these conflicts – should it choose to do so.

Moscow chooses not to do so for various reasons unique to each conflict, but the over-arching reason is that a resolution would enable each country to feel free enough to look for other partners and multi-lateral alliances.  In the case of Georgia this would be NATO and the European Union.  But Moscow is bound and determined to keep this from happening in order to preserve its self-described “special sphere of influence.”

What I learned in multiple trips to Yerevan and Baku with my Co-Chair colleagues was that each side was adamantly frozen into its position and would barely deign to consider even the slightest interim compromise, even as a good-faith confidence-building measure.  I personally came to believe that only a war would finally settle the problem of Nagorno-Karabakh, although I never stated this view publicly.  And yet we co-chairs kept at it.

It should be remembered that during the 2020 Nagorno-Karabkah war, each of the Minsk Group co-chair capitals made a stab at negotiating a cease-fire, but each of these so-called cease-fires lasted mere hours.  Only when it looked as if Azerbaijan might actually reconquer its entire territory did Moscow step in and arrange the current situation.  Armenia had lost the seven territories it had occupied for nearly 30 years as a buffer zone around, and access route into, Nagorno-Karabakh and had even lost a southern chunk of Nagorno-Karabakh itself, including the lovely mountain city of Shusha.

Moscow was eminently better placed than any leading power or multilateral organization to bring Nagorno-Karabakh to a full and final conclusion.  Instead, it stopped the war but – significantly – now maintains peacekeeping troops in Azerbaijan, marking the first time since the independence of the former Soviet Socialist Republics that Moscow now has troops, in various capacities, in all three countries of the South Caucasus – Armenia, Azerbaijan, and Georgia – thus further solidifying Russia’s “special sphere of influence.”

Is there, therefore, any role remaining for the OSCE Minsk Group?  As noted at the beginning of this essay, Armenia says “absolutely,” whereas Baku says “certainly not.”  And so the status quo of the Minsk Group is likely to continue bumping along in relative obscurity.  However, with some creative thinking, the OSCE, and the Minsk Group itself, could redefine that role.

For example, it could add enabling reconstruction to its approved mandate.  In fact, both Baku and Yerevan have already recognized that the opportunity now exists for repairing and further building the infrastructure of the immediate region, including the construction of new roads and other modes of transportation and connectivity within and reaching beyond the region.  For example, the Minsk Group could organize and coordinate funding by the World Bank, the International Monetary Fund, and the European Bank for Reconstruction and Development, as well as by the capitals of the OSCE member states themselves, to devise a master plan and to help pay for enhanced development in the former Nagorno-Karabakh war zone itself and, more broadly, in the South Caucasus region.  Obviously, this would not be easy, if for no other reason than the region’s difficult neighbours, Iran and Turkey, would want to have their say in such an effort. But if the Minsk Group doesn’t redefine its mission, then it will continue, most, unfortunately, as an intriguing backwater of international diplomacy.