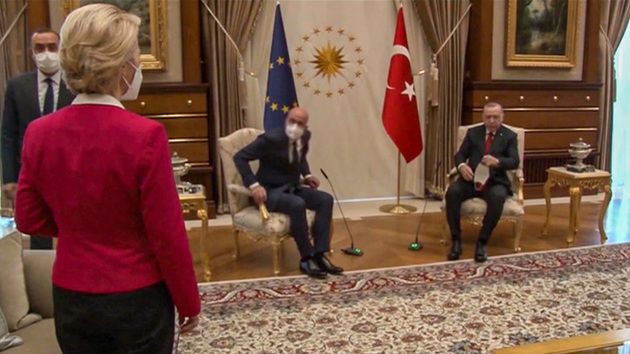 There is an ongoing attempt to cast a shadow over European Council President Charles Michel and European Commission President Ursula von der Leyen's visit last week to the capital Ankara. A supposed scandal, dubbed "Sofa Gate," was invented to tarnish the host country’s reputation – which is accused of having humiliated the female leader by assigning her to the couch, Daily Sabah reports.

The most unfortunate reaction to the made-up scandal came from Italy, whose recently appointed prime minister, Mario Draghi, made the following statement: “I disagree with the way President Recep Tayyip Erdoğan treated Ursula. We must be frank with these dictators but, at the same time, cooperate with them for the sake of our nations’ interests.” There were many problems with the Italian’s statement – an embodiment of cheap European populism. The Turks hosted their guests according to the European Union’s demands. Both Michel and Jean-Claude Juncker, the former president of the European Commission, confirmed that fact.

According to EU protocol, the European Council’s president takes precedence over the president of the European Commission. In other words, where Leyen was seated only represented a tug-of-war between the two figures. Let the European leaders, therefore, sort out their own problem of hierarchy. Any attempt to blame that issue on Turkey is, for lack of a better word, shameless and disrespectful.

Nonetheless, what Draghi said about the Turkish president deserves to be analyzed in greater detail, with an eye on Turkey’s relations with Italy and the European Union. First of all, the Italian prime minister would do well to remember his country’s recent past – including Benito Mussolini’s fascist regime and the invasion of Libya. Draghi currently looks for a new geopolitical move in Libya, where the interim government’s formation restored some level of stability. The Italians now seek to lead the European Union in terms of Libya’s reconstruction as well as energy and defense. That’s why Rome wants to align its interests with France and Greece, and favors the withdrawal of Turkey and Russia as part of a peace conference.

Surely enough, the Italian prime minister issued that shameless statement against the backdrop of rampant anti-Erdoğanism in Europe. European politicians, including French President Emmanuel Macron, tap into that sentiment out of populist concerns. The French president recently said he was concerned about Turkish meddling in next year’s presidential election. Draghi’s attempt to become a free rider is even more interesting because Rome would have had zero influence in Libya today, had Turkey not stepped in to save that country’s U.N.-recognized government from the coup plotter, Khalifa Haftar.

Ironically, Erdoğan defended Italian interests, too, by keeping Fayez Sarraj’s government in power. In other words, Italy can pursue diplomatic influence today thanks to Turkey’s successful attempt to balance out France. That the Italian government, which rejoiced at Ankara’s intervention last year, now acts without shame is a whole different level of recklessness. European media outlets complain that the European leaders’ visit to Turkey focused on strategic interests, despite the lip service paid to human rights and democracy. Critics had put quite a lot of pressure on Michel and Leyen prior to their trip.

Values have no impact?

In truth, though, there is no dilemma here. The European Union exploits “values” to further its strategic interests. Keeping in mind Europe’s response to the Arab revolts and, in particular, the military coup in Egypt, it is obvious that “EU values” have no impact on European policy. Moreover, the Europeans do not respect Turkey’s national interests enough. They want to offer little and receive much in return. Europe thinks that it can brush aside Turkey’s push for the opening of new chapters and take minor and ambiguous steps toward updating the Customs Union and renewing the refugee deal.

Yet they are eager to be free riders when it comes to exploiting Turkey’s recent strategic gains. They demand that Turkish troops leave Libya, that Ankara leave Greece alone despite the latter’s maximalist demands, that Turkey supports the Minsk Group in Nagorno-Karabakh and that it accepts the EU’s request to observe Cyprus talks. It seems that European politicians have really internalized the free-rider spirit.

Erdogan: it's time for EU to write a story for itself

Brussels welcomes new level of dialogue between Yerevan and Ankara