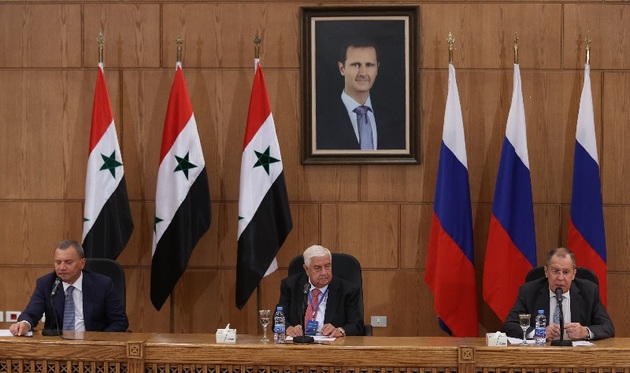 Officials from Syria and Russia, whose military support since 2015 helped Damascus reverse gains by Islamists and other rebels, have said the two sides plan to boost trade ties and will review energy, mining and power projects. Borisov told a televised news conference that Moscow had presented in July an agreement to expand economic ties that was being studied by Damascus. He said he expected it would be sealed in December, during his next visit to Syria’s capital.

“Russia turned the tide for Assad and with the regime now facing its gravest challenges, Moscow is in a better position than any other time to further squeeze Assad,” said one Western diplomat who follows Syria. Although Assad has now regained most of the territory he lost, the economy is in tatters, leaving many Syrians in poverty as the currency has lost 80% of its value.

Russia has criticised the new U.S. sanctions that took effect in June under the so-called Caesar Act. Washington says the sanctions, which penalise foreign firms dealing with Syrian government entities, aim to cut off revenue for Assad’s government and him push him back into U.N.-led talks to end the conflict.

Syria is pinning its hopes on Russia, its biggest foreign ally, to help it shore up its economy. Syria’s main regional ally, Iran, is itself also struggling to cope under a separate round of U.S. sanctions.

Hussam Taleb, a Syrian pro-government analyst, told Syrian state television the Russian visit would anger Washington which he said was “fighting us in our livelihood by passing the Caesar Act to deprive us of our wealth.”

Yesterday, following the talks in Damascus, Russian Foreign Minister Sergei Lavrov, during a joint press conference with Deputy Prime Minister Yuri Borisov and Syrian Foreign Minister Walid Muallem, denied rumors that the Russian Federation uses Khmeimim Airbase to deliver to Libya weapons and mercenaries to support Khalifa Haftar. ”The Russian Federation is constantly accused in abusing the situation in various countries from Libya to Africa, Europe and even the US. We have never been presented with any facts. The fact that such statements immediately get into media space without initiation of the bilateral and multilateral mechanisms to clarify any concerns on a particular topic, suggests that the authors of such statements are pursuing their own goals.

We, along with all other members of the UN Security Council, supported the introduction of an arms embargo on Libya by a special resolution. We remember that a few months later, some European countries publicly, through their general staffs, military representatives, declared that they support the extremists fighting against Gaddafi and supply them with weapons. These are documented facts. By the way, this arms embargo, its importance, the need to comply were confirmed during the Berlin conference on Libya in January this year, where the Russian Federation participated and the results of which were enshrined in another UN Security Council resolution, which everyone needs to comply with, " Lavrov said.