The rapid rise of 'red tourism' in China 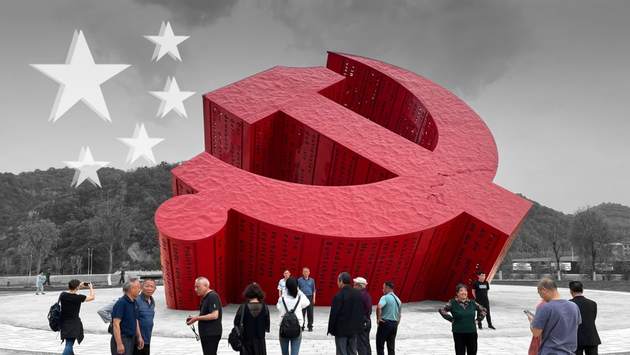 Growing up in Guang'an, Zhang Yiwen always felt a closeness to late Chinese leader Deng Xiaoping, who spent the first 15 years of his life in her home city in the country's western province of Sichuan, as CNN writes, Zhang knows Deng's stories like the back of her hand and enjoys recounting them for visitors to the Communist revolutionary's former residence, where she's worked as a guide for the last 11 years.

"Grandpa Deng has a great image in our heart," Zhang tells CNN, using the local nickname for the man who, as paramount leader from the late 1970s until his death in 1997, is credited with modernizing and opening up China.

Zhang's passion for all things Deng, combined with her storytelling skills, has helped her win competitions and national recognition.

In late 2020, she was one of the two people from Sichuan chosen to join the nationwide "Five Good Guides" program, one of several initiatives from the Chinese government to improve and highlight the country's rapidly booming "red tourism" industry.

Ministry of Culture and Tourism officials handpicked 100 of the country's top tour guides working in so-called "red sites" -- locations with historical and cultural significance to the ruling Communist Party's history.

The chosen ones traveled to Beijing to receive further training aimed at equipping them with skills to be, as the government puts it, "a firm inheritor of the red gene, a wonderful storyteller of red stories, a vivid interpreter of the red spirit, a loyal disseminator of the red culture and a powerful leader of the red trend."

Although the concept of "red tourism" has been around for decades, it wasn't officially included in the country's national tourism plan until 2004. Some analysts say it presents a doctored version of history -- others going so far as to call it outright brainwashing.

As a result, "red sites" have expanded greatly across the country in recent years -- spotlighting everything from memorials to the Communist revolution to trees planted by Communist leaders.

With the global travel market still hindered by the pandemic and Chinese tourists forced to stay home, domestic travelers have given the "red tourism" industry a boost.

"In 2020, the number of red tourists exceeded 100 million and contributed to 11% of domestic travel," says Mimi Li, associate professor at Hong Kong Polytechnic University and an expert on Chinese tourism policy.

The timing couldn't be better for travel industry players hoping to capitalize on this growing segment, with the country gearing up to celebrate the 100th anniversary of the founding of the Communist Party in July. More "red tourism" initiatives are being rolled out almost weekly to coincide with this milestone -- in both state and private sectors.

The company predicted the campaign would attract 50 million travelers in 2021.

"Most researchers classify red tourism as a type of heritage tourism. For some of the red sites like Jinggangshan or Yan'an, red tourism is almost a guaranteed income," says Li, referring to two famous former Communist revolutionary bases.

CNN recently visited Yan'an in northern Shaanxi province as part of a government-led trip and witnessed throngs of visitors -- some donning revolutionary attire -- cramming into former residences of Communist leaders, auditoriums for past party congresses and countless exhibition halls.

Droves of party members retook their admission oath -- "be ready at all times to sacrifice my all for the party and the people, and never betray the party" -- in ritualistic fashion, while schoolchildren received open-air lectures on why history chose the Communists to rule China.

Unsurprisingly, Yan'an officials are eager to promote their city's biggest selling point with bold investments. A shiny airport, rows of new hotels and even a billboard advertising the upcoming opening of a Starbucks dot the former economic backwater.

Their effort appeared to have paid off before the pandemic. In 2019, more than 73 million visitors flocked to the city of just over two million residents, nearly doubling the tourist figure just three years earlier.

With the Covid-19 virus mostly contained within China, Yan'an tourism bounced back during the weeklong May Day holiday this year, with tourist spending already surpassing that in the same period before the pandemic, according to local authorities.

Li, the Hong Kong professor, says that when the first "red tourism" wave kicked off, it mainly focused on education -- a compulsory activity for government officials and students. But the market has changed.

"We see more and more tourists visiting those sites not because they are asked to do so but just because they want to do so," she says.

And these "red travelers" are getting younger.

According to data from travel platform Tongcheng-Elong, travelers aged 21 to 30 made up 40% of bookings and searches related to the "red tourism" segment over the recent May Day holiday.

These figures won't come as a surprise to tourist guide Zhang, who says she's noticed more young people becoming interested in learning about Deng's story and his place in history.

When she first started her job at Deng's birth home, most young visitors only took a casual look at the displays. But now, "most of them hire guides and pay close attention to our personal stories about Deng," she says.

Improved facilities and services, creative souvenirs and the use of technology may have helped make "red sites" more appealing to younger generations. But some say the main driver is an increased focus on national pride and identity.

"Young people nowadays are more proud and confident and identify more strongly with our nation and country," Zhang says. "They want to learn how China grew from a poor country to what it is today."

Li notes that research shows young Chinese are displaying a greater appreciation than ever for national brands, from skincare to fashion.

Chen Shuna, a student at Beijing's Capital University of Economics and Business, visited the city's Museum of the War of Chinese People's Resistance Against Japanese Aggression with her friends in November 2020.

She tells CNN that what impressed her the most was the depiction of the Nanjing Massacre.

"(The scene) was very tragic," says Chen. "Every item in the museum is proof of a story that earlier generations wrote with their blood. But we don't immerse ourselves in the emotion of revenge. Rather, we are alerted that our nation needs to rise up and strengthen itself to resist all invaders."

The dark side of 'red tourism'

While learning their own national history is a huge draw for tourists around the world, the difference is that "red sites" almost always offer one-sided storytelling.

Critics say these sites focus on the perseverance of the Communist leaders and their glorious triumphs, overlooking their sometimes-catastrophic failures while even twisting historical facts.

"The Chinese regime would certainly like to promote 'red tourism' for both commercial and ideological purposes," says Simon Shen, an influential political commentator from Hong Kong and founder of international relations company Glocal Learning Offices."It's regarded as a core subject of patriotic education. How effective it is -- that's another question."

But Hong Kong academic Li insists that using historic sites and attractions as a means to "educate" citizens isn't exclusive to China. What the country lags behind in, she says, is sophisticated marketing.

"In other countries like in the US, they do it very implicitly," says Li."I think it is something the Chinese government should pay attention to or spend more time and effort on. It really doesn't feel very good if you sense you are asked to believe something."

In the Museum of the War of Chinese People's Resistance Against Japanese Aggression in Beijing, for example, emphasis is placed on the sacrifice the Communist Party made during the Sino-Japanese War in the 1930s and 40s and how the then-fledgling party was the "mainstay" that led the country into victory.

On the history page on its official website, the museum alleges the Kuomintang -- the dominant ruling party of China from 1928 to 1949 -- displayed a lack of willingness to stand up against the Japanese invasion, calling out its "passive resistance" effort in the war.

That's a claim rejected by many researchers outside mainland China.

Zhang Yu, Sweden-based secretary-general of the Independent Chinese PEN Center, said in an interview with the Voice of America earlier this month that "red tourism" is effective in making its visitors believe in the Communist version of truth through "subtle indoctrination."

"The most effective part of (red tourism) is that it isn't all fake," Zhang said in the interview. "The travel sites are half-real-half-false. The most important purpose is to (make people believe) that 'without the Communist Party, this country is over.'"

Mike Robinson, director of the UK-based Ironbridge International Institute for Cultural Heritage, has conducted extensive research into heritage tourism in China. "There are complexities and anomalies in red tourism -- or any form of tourism that is so closely allied to only one ideology," he says.But the researcher says it's "uncritical, unreflective and naive" to outright dismiss "red tourism."

"For the Chinese authorities, priorities for red tourism should be about building it into a wider program of sustainable tourism development for more marginal communities and then to open it up for a wider international audience through effective and honest interpretation."

Shen, however, has a less optimistic view on the topic, comparing "red tourism" in China and tourism in North Korea, another communist country known for its pervasive indoctrination programs."For countries like North Korea, they also have similar routes for foreign tourists, but few would be 'brainwashed' afterwards -- more frequently the tourists would have very different thoughts," he says.

The difference, he adds, is that China has the economic means to promote its version of history on a global scale."As a result, some tourists visiting those sites might ... become part of CCP's propaganda machine if they can't receive a proper debriefing in advance or afterwards."

But Robinson, who has published reports on tourism and sustainability for UNESCO, notes the link between Beijing's sustainable development goals and "red tourism" growth -- and concrete benefits for local communities. Guang'an is one such example. Deng's former residence was the first "red site" in Sichuan to be awarded a 5A rating -- the highest tourism ranking in China.

Renovations and upgrades have been carried out since the early 2000s. It's now a 3.19-square-kilometer tourist complex of attractions including a museum, a lake and a square with a bronze statue.

With its pleasant scenery and abundant produce, Guang'an's "red tourism" appeal has helped local businesses prosper. In 2017, it was one of the first groups of counties in Sichuan to be lifted out of absolute poverty. In 2019, the city of less than half a million residents welcomed more than three million visitors.

"Tourism policy -- for what it's worth-- is driven by economics," says Robinson. "It is not by chance that 'red tourism' is closely linked to programs of rural regeneration, agricultural diversification and improving local livelihoods."