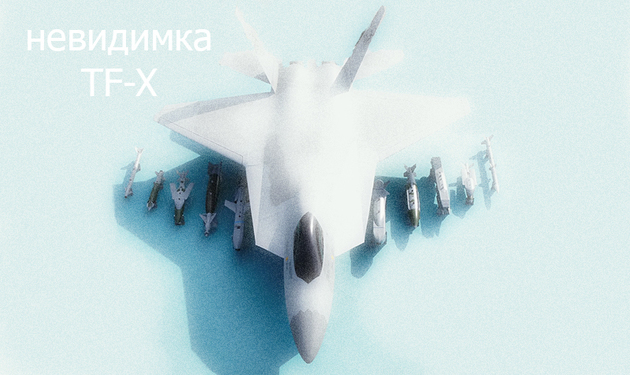 Turkey’s fifth-generation stealth fighter, TF-X, is likely to make its first flight in the next three years. A regional military power, Ankara desperately needs an advanced fighter jet and TF-X, projected as a Turkish equivalent of the US F-35, is expected to fulfil not only the country's needs.

Turkish Aerospace Industries (TAI) unveiled a full-scale mock-up of TF-X/National Combat Aircraft (MMU) at the ongoing Singapore Air Show 2022, The Eurasian Times writes. It is on static display at the Changi Exhibition Centre from February 15 to 18. The mock-up was flanked by models of various weapons and unmanned aerial vehicles (UAVs), reported Janes. This is for the first time that TAI has showcased a TF-X mock-up in an Asian country. Earlier, a full-size mock-up of the TF-X was displayed at the Paris Air Show 2019. At that time, Turkey wasn’t yet expelled from the F-35 consortium by the United States for purchasing the Russian S-400 air defense system.

Turkey has come a long way since; making significant strides in the program as talks with the US on reviving the F-35 deal remain inconsequential and the need to upgrade an aging fleet becomes necessary amid tensions with Greece. The official Twitter handle of defense giant BAE Systems said, “We work with Turkish Aerospace to bring know-how and engineering expertise to the TF-X program”. TAI is also displaying mock-ups of additional platforms it has created. On March 18, 2023, the TF-X MMU will be unveiled for the first time, with a maiden flight scheduled for 2026, according to Daily Sabah.

The TFX is a fifth-generation fighter that looks similar to Lockheed Martin’s F-35 Lightning II. The indigenous aircraft will eventually replace the Turkish Air Force’s F-16 fighters, which are to be phased out by the 2030s.

The TF-X is a twin-engine multi-role aircraft designed primarily for air-to-air missions, but it could also be employed for air-to-ground missions.

According to TAI, once all critical features (such as greater situational awareness, sensor fusion, low observability, weapon bay, and so on) have been inculcated as part of the TF-X program, Turkey will become one of the few countries with the necessary technology, engineering infrastructure, and capabilities needed to produce a 5th-generation (or beyond) fighter plane.

Turkey also opened new engineering facilities for the design, development, and production of this fighter jet in order to meet the deadline announced by President Erdogan, as previously reported by the EurAsian Times. The full-scale mock-up debut of TFX in Singapore could be aimed at finding potential partners in Asia. TAI has been working to expand collaborations in next-generation technologies in the Asian market, particularly in the defense and aviation sectors. “We will meet with military and civilian representatives from countries and companies that will participate in the Singapore Airshow and hold important talks to develop capacity,” TAI chief had stated.

Turkey launched its ‘Asia Anew’ initiative in 2019 in an effort to strengthen its ties with countries in this region. A major component of the initiative has turned out to be defense outreach. In November last year, TAI built its first engineering and design office in Southeast Asia, in Malaysia. It has emerged as one of the two most important bidders for the Malaysian LCA contract with its Hurjet, alongside Indian LCA Tejas, which is also participating in the Singapore Air Show, 2022.

Further, engineers from Turkey and Malaysia are to collaborate on a range of projects, including unmanned aerial vehicles (UAVs), jet trainers, helicopter projects, and global aviation ecosystem modernization programs.

Last year, TAI was believed to have reached a contract with Kazakhstan to sell three of its Anka medium-altitude, long-endurance (MALE) unmanned combat aerial vehicle (UCAV), according to a previous report of Daily Sabah. Anka’s sale came after Turkey and Kazakhstan signed a military cooperation agreement in May last year, which calls for the sharing of information and expertise pertaining to reconnaissance and attack drones.

Last November, Turkey’s state-owned Anadolu Agency (AA) had quoted TAI general manager Temel Kotil as saying, “We consider Kazakhstan exports a very important success after Tunisia. We are proud that our Ankas will now be used internationally.” Turkish Foreign Minister Mevlut Cavusoglu also made a visit to all the four states of Central Asia in March last year in order to enhance outreach. Uzbekistan had reportedly expressed interest in Turkish defense products after witnessing the success of Turkish drones deployed by Azerbaijan during the 2020 Nagorno-Karabakh Crisis. Turkey has largely been successful in strengthening ties with countries in the South Asian region, especially with Bangladesh and Pakistan.

Bangladesh and Turkey signed a memorandum of understanding on security cooperation last month when Turkish Interior Minister Süleyman Soylu was in Bangladesh for a one-day visit. The deal would cover military training, intelligence sharing, counterterrorism operations, and fighting cybercrimes.

Bangladesh is Turkey’s fourth-largest arms buyer. It bought weaponry worth $60 million from Turkey in the first four months of 2021. Ankara’s defense and aerospace exports in 2021 stood at $3 billion.

One of the closest and most trusted partners of Turkey in Asia is Pakistan. It is currently in the process of developing Ada class corvettes for Pakistan and upgrading its Agosta 90B class submarines. Pakistan is also set to acquire deadly torpedo countermeasure systems from Turkey.

Even though Turkey is a member of NATO and by default, a partner of the United States, some experts have expressed concerns that it could buy a fighter jet from China.

Turkey has been left in the lurch following its expulsion from the US-led F-35 program. Washington is also ignoring its requests about the sale of F-16 fighters. Given its proximity with Pakistan and its own cooperation with China under the BRI, experts predict that it could choose to buy the JF-17s or J-10C from China.

In the past few years, Turkey has emerged as a significant defense manufacturer. Its outreach to Asia could prove to be beneficial for its defense industry as Asian militaries look for cheaper alternatives to American weapons, which also come with many export restrictions.