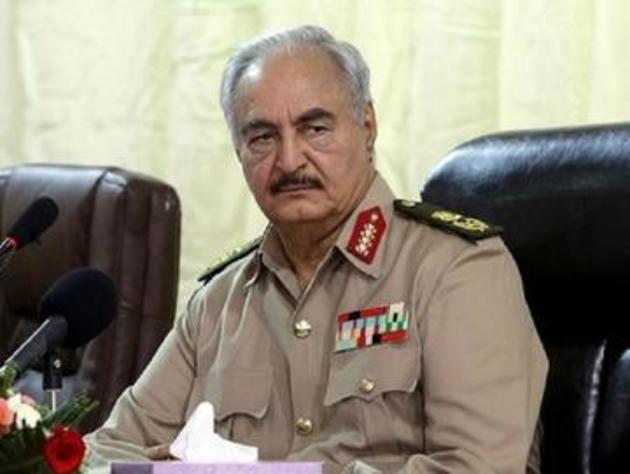 Recep Tayyip Erdogan won't hold back from "teaching a lesson" to Khalifa Haftar if his eastern Libyan forces continue attacks against the country's internationally recognised government, the Turkish president said on Tuesday. Erdogan said Haftar had "run away" from Moscow after Monday's peace talks between him and the head of the Tripoli-based government, Fayez al-Sarraj, failed to lead to a ceasefire to end nine months of fighting.

Middle East Eye reports in its article Turkey ready to 'teach a lesson' to Haftar after Libya talks end without resolution that Sarraj signed the ceasefire agreement but Haftar left Moscow without signing the accord, asking for more time to consider the matter. "If the putschist Haftar's attacks against the people and legitimate government of Libya continue, we will never refrain from teaching him the lesson he deserves," Erdogan said in a speech to AKP politicians in parliament. "It is our duty to protect our kin in Libya," Erdogan added, saying that Turkey had deep historical and social ties with the country and that Haftar would have taken over the entire nation if Ankara had not intervened.

Erdogan also said in his speech that Turkey was determined to stop the Syrian government from violating a ceasefire, which came into effect on Sunday in the northwest Syrian province of Idlib to prevent 400,000 people fleeing towards the Turkish border.

Germany confirmed on Tuesday it will host a conference on Sunday in Berlin to support the United Nations' effort to achieve peace and reconciliation in Libya. Representatives from the United States, Russia, Britain, France, China, Turkey, Italy and the UN will be among the participants, said the German government in a statement. Germany has also invited Sarraj and Haftar, it said.

Libya has been mired in chaos since the toppling of Muammar Gaddafi in 2011.

The talks in Moscow came after a ceasefire, initiated by Turkey and Russia, saw a lull in heavy fighting and air strikes on Sunday, though both factions accused each other of violating the truce as skirmishes continued around the capital Tripoli.

According to a draft of the deal which Sarraj signed and which was shared by a GNA spokesperson with Middle East Eye, both sides would create a joint military commission to ensure the stability of the truce.

The draft joint statement says a 5+5 military commission would determine the line of battle between the parties, monitor the implementation of the ceasefire and ensure the sustainability of it. Each side will also assign a representative to join UN-led economic and political dialogue and form a working group on the intra-Libyan political settlement. Earlier this month, Turkey deployed forces to support Sarraj's government, while Russian military contractors have been deployed alongside Haftar's LNA forces. Asked about those mercenaries, Russian President Vladimir Putin said on Saturday that any Russian citizens fighting in Libya were not representing the interests of their state or receiving money from it.