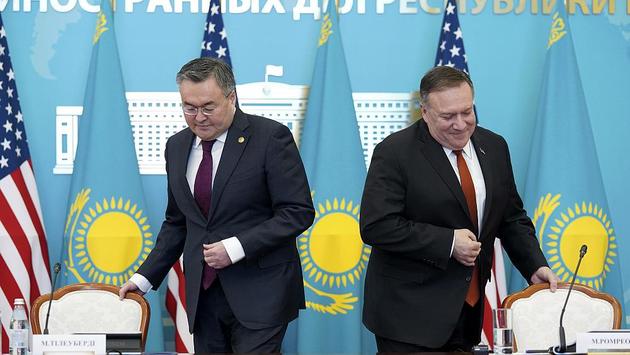 U.S. Secretary of State Michael Pompeo traveled to Kazakhstan and Uzbekistan as part of a Central Asian snap visit, and today he will take part in a ministerial meeting in the C5+1 (Central Asia-U.S.) format, during which the U.S. will present its new Central Asia strategy. The priorities of the new U.S. Central Asia strategy will remain unchanged - a stable, developing region, cooperation with all world players, Pompeo said at a press conference in Nur Sultan following talks with Kazakh Foreign Minister Mukhtar Tleuberdi.

"We fully support Kazakhstan’s freedom to choose to do business with whichever country it wants, but I am confident that countries get the best outcomes when they partner with American companies," Pompeo said. According to him, such large companies as Chevron and ExxonMobil will continue to invest in the Kazakh oil and gas sector, contributing to the development of the oil fields and job creation in Kazakhstan. The U.S. Secretary of State emphasized that bilateral partnership provides the development and strengthening of Kazakhstan' economic relations not only with the U.S., but with the whole region.

Doctor of Political Sciences, Deputy Director General of the Center for Strategic Estimations and Forecasts Igor Pankratenko believes that the United States offers economic preferences and assistance in attracting investment in exchange for distancing from Moscow and an independent foreign policy not only at the regional level, but also in the international arena. "As for the previous claims of the U.S. related to human rights and democracy, it does not make much difference for the United States now, they have other priorities - only business, almost without any ideology, leaving behind by history those chimeras that pretty much harmed the U.S.-Central Asian relations when Barack Obama and his Democrats occupied the White House," Pankratenko told Vestnik Kavkaza.

According to him, Pompeo’s visit to Minsk showed that he has some rather unfortunate news for local, Central Asian human rights defenders. Of course, the State Department will continue to listen to them carefully, knitting eyebrows or showing concern where it is necessary. Except this is the protocol, the ritual action, the "bone" that simply needs to be thrown to the "progressive world community." In reality, this will no longer have anything to do with 'realpolitik' pursued by the U.S. - these are different times in Washington, and now, after the impeachment debacle, the White House administration has no intention of hiding this.

"Experts who see some hostile intentions against Moscow in Pompeo’s visits to the post-Soviet space can also calm down. The U.S. is not going to "replace" Russia in Central Asia, taking a number of its "elder brother's" comments. There is no "either or" question. Washington is just ready to "help" Uzbekistan and Kazakhstan in becoming a little more relaxed, in its opinion, in their foreign policy steps, which be supported through U.S. economic preferences - "That wasn't on purpose, it just happened," the expert noted.

In Nur Sultan, Pompeo also thanked Kazakhstan for supporting U.S. efforts in Afghanistan. Work on this issue will continue, as the United States plans to withdraw its troops from Afghanistan, and Kazakhstan remains an important link on the northern supply route.

In addition, Pompeo noted the progress of the C5+1 in cooperation to address the fight against terrorism and radical Islamism. "Kazakhstan’s leadership in the C5 + 1 ensures its fulfillment of its tasks, and I look forward to the meeting in Tashkent," he added.

The C5 + 1 format, established by Washington in 2015,  is a multilateral mechanism of interaction between Kazakhstan, Kyrgyzstan, Tajikistan, Turkmenistan, Uzbekistan and the United States.

Head of the Center for Central Asia and Caucasus Studies at the Russian Academy of Sciences Stanislav Pritchin told Vestnik Kavkaza that when launched, this format was unique because the countries of the region did not have their own dialogue platform. The United States acted as a mediator in this project. However, after Shavkat Mirziyoyev came to power in Uzbekistan, the acute need for such a dialogue was minimal. At the Uzbek president's initiative, a regional dialogue platform was established and the countries act independently now. The first summit of the regional leaders was held in Astana (now Nur-Sultan), the second in Tashkent, the third summit is planned to be held in Bishkek. Despite the fact that the U.S. is making attempts to revise the strategy, they have no new economic, military, and energy proposals, while the old ones have long been implemented. A new strategy is needed as an element of the U.S. presence in Central Asia.

As for Mike Pompeo's visit, it can be regarded as a courtesy visit. "U.S. secretaries of state travel to Central Asia once in five years to indicate their interest in the region. At least for form's sake. John Kerry, Condoleezza Rice, Madeleine Albright and now Mike Pompeo have visited the region. This visit is interesting because we see U.S. priorities in the post-Soviet space and in Central Asia, in particular. Pompeo traveled to Belarus and Ukraine, visited two key Central Asian countries - Kazakhstan and Uzbekistan. Kazakhstan - due to the country's geopolitical position, as well as cooperation in the energy sector with many American companies. Uzbekistan has a strategic geopolitical location. The country is now opening up, and it’s important for the U.S. not to miss the moment and fix itself as one external key players at the backdrop of Uzbekistan's intensifying relations with Russia and China ," Pritchin stressed.

Chinese expert Sheng Siyu believes that it would be a mistake to consider the U.S. Secretary of State visits to Uzbekistan and Kazakhstan in isolation from U.S.-Chinese relations. "A few years ago, approximately in 2010-2012, the U.S. lost interest in Central Asia. Moreover, this affected political and economic interaction, as well as security cooperation," Sheng Siyu told Vestnik Kavkaza. As a result, according to him, there was a certain vacuum, when there was a request for an external "third force" in the region, and Washington did not want to take on this role. But, as the Russians say, "nature abhors the vacuum," and this place was taken by China, proposing to the region the construction of a joint future within the framework of Chairman Xi Jinping's Belt and Road Initiative.

"With varying degrees of approval and varying degrees of involvement, but the countries of the region still accepted China's proposal to participate in this initiative. And such successes have been achieved in its implementation in a short time, that it is already possible to speak with confidence about
China's economic predominance in Central Asia, about the cooperation with Beijing being the locomotive of the region's socio-economic development.

Naturally, this cannot but cause concern in American business and economic circles. Washington is unable to gain a foothold here as a major player, but it has no such goal. But it is quite able to partially regain its position, and become a partner for local elites, which is more attractive than China in some areas. And I think the restoration of some positions and the launch of the process of U.S. penetration into individual niches is the main task of Mike Pompeo's visit to Tashkent and Nur Sultan," the Chinese expert said.