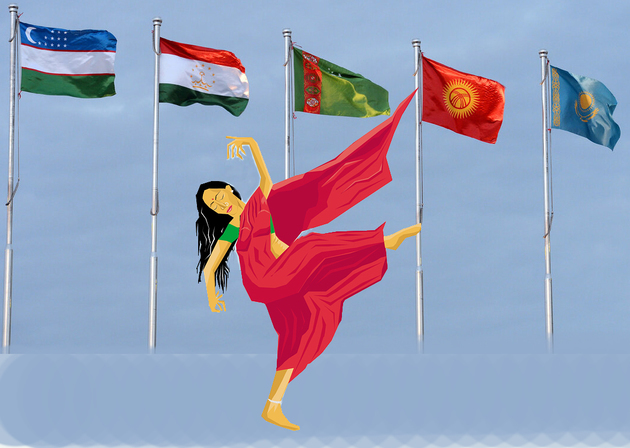 On January 26 each year, India’s Republic Day parade has been an occasion to invite an important foreign leader to underline the evolving focus of Indian foreign policy.  Since Prime Minister Narendra Modi’s coming to power in May 2014, his hyperactive indulgence with foreign visits and in hosting foreign leaders saw him invite US president Barack Obama for his first Republic Day in 2015. This was followed by India inviting heads of state from France, the United Arab Emirates, South Africa, Brazil and the United Kingdom, except that last year Prime Minister Boris Johnson had to cancel his visit at the very last stage because of the pandemic spike in his country, Asia Times writes.

During recent years, 2018 was the one that, for the first time, saw India inviting a group of 10 national leaders from all the members of the Association of Southeast Asian Nations to the ceremonies. This same format was to be repeated this year, with India inviting all the heads of state from the five Central Asian republics (CARs). But for the second time in a row, the pandemic has intervened and these leaders will not be traveling to New Delhi. Their interactions will now be limited to the first ever India-Central Asia Summit, which will be online on January 27.

While this quick-fix solution may be understandable as the best possible choice, this debut India-Central Asia summit begs scrutiny into what has triggered India’s focus on the CARs and what one can expect from this summit, or beyond it.

This year marks the 30th anniversary of India’s diplomatic recognition of the five Central Asian Republics, namely Kazakhstan, Kyrgyzstan, Tajikistan, Turkmenistan and Uzbekistan. India was among the first countries to recognize the CARs, and prime minister P V Narasimha Rao made two back-to-back visits to the region in 1993 and 1995. India has since built some piecemeal partnerships with these countries in a whole range of sectors such as security, culture, education, pharmaceuticals, tourism, hydrocarbons, and fissile materials like uranium, as well as information, cyber and space technologies etc.  For much of this time, however, India’s physical access to the landlocked CARs has been limited. Continued tensions in Afghanistan and India’s growing proximity with the US and Washington’s concerns, and threats of sanctions, on India’s investments in Iran’s Chabahar port undermined India’s connectivity with the CARs.

India has had a military presence in the region, with an airbase in Tajikistan that was started in 2002, but it only hosts a few helicopters and is not allowed to house fighters. The same year, India, Iran and Russia signed up for an International North-South Transport Corridor, followed by the Turkmenistan-Afghanistan-Pakistan-India (TAPI) pipeline in 2010, but both of these have remained but a fond memory.

China, on the other hand, is the only major power that has showcased an exponential expansion of its footprint in the CARs. This hyper-engagement of China has been driven by such factors as its security concerns about independence of the CARs influencing the restive Uighurs in Xinjiang region. Beijing also sought early demarcation of its boundaries with the CARs, access to their natural and mineral resources, and pushing its Belt and Road Initiative for these infrastructure-deficit countries.

As a result, the past three decades have seen China’s trade with the five CARs grow by more than 100 times to reach US$41.7 billion for 2018, of which China supplies manufactured goods worth $100 billion. China’s investment had crossed $136 billion by 2020. China has clearly overtaken Russia as most substantial ally of the CARs, even in face of the projected bonhomie between Presidents Xi Jinping and Vladimir Putin, which is based on China’s imports and investments into Russia’s energy sector and Moscow becoming lenient on transferring defense technologies to Beijing.

Historically dominant Russia is now facing China on one side and the North Atlantic Treaty Organization on the other, and Moscow sees its influence waning. This has obliged Moscow to lean toward New Delhi. However, there have been reports of Chinese military presence inside Tajikistan, and last October China extended it $8.5 million aid to construct a base for the Special Raid Response Unit of its Department of Organized Crime. In face of the Chinese juggernaut, Russia has tried to knit together this erstwhile “near abroad” with the Collective Security Treaty Organization and Eurasian Economic Union, but India remains a negligible player, with its trade stagnating under $2 billion, with half of that with Kazakhstan.

This is where India’s reawakening toward the CARs appears timely. The precipitous departure of US forces from Afghanistan has triggered India’s re-engagement with the CARs. The takeover of Kabul by the Taliban* and continued chaos since then have worsened India’s already difficult access to the CARs – three of which, namely Tajikistan, Turkmenistan and Uzbekistan, share land borders with Afghanistan. Compared with Russia, China, Iran and Pakistan – which have better access and influence with the Taliban* leadership – India and the CARs have to worry more about a spillover of terrorism, narcotics, radicalization and refugees.

It is these triggers that have seen India re-engaging the CARs, first at the Regional Security Dialogue convened in November by Indian National Security Adviser Ajit Doval inviting his counterparts from all the neighbors of Afghanistan, including the five CARs. Then in December, Foreign Minister Subrahmanyam Jaishankar hosted in New Delhi an FM-level India-Central Asia Dialogue.

The latter produced a 29-paragraph joint communiqué showcasing their consensus on a whole range of partnerships and possible initiatives. This was all done in the run-up to the first India-Central Asia Summit, which will be taking place next week online.

The Afghan humanitarian crisis and refugees will be their immediate concern. According to UN estimates, more than 5.7 million Afghans live outside the borders of their homeland, with a large number of them in the CARs. As regards India, in the 1970s, Afghanistan’s Sikh population was more than 100,000, which had been reduced to just 240 by 2021. Understandably most of them have arrived in India. Of the 2.6 million registered Afghan refugees worldwide, India may not have too many yet; about 15,000 of them live in Delhi and another 2,500 in Pune district, Maharashtra. Providing immediate relief to the emerging humanitarian crisis in Afghanistan and the Afghan diaspora will certainly be the main focus of this first India-Central Asia summit.

The two sides will of course have many other areas to focus on as well. In the face of Russia fast losing out to expanding Chinese supremacy, the CARs have been keen to explore alternative partnerships. After Modi’s 2015 visit to all five CARs, India pledged a $1 billion line of credit for building such partnerships. India’s Comprehensive Economic Partnership Agreement (CEPA) with the Eurasian Customs Union should facilitate India’s commerce and investments, provided these are backed by strong political will from both sides. The potential remains unlimited.

First, India with its huge energy import dependency cannot ignore the CARs’ huge reserves of oil, gas and uranium, which are enough to cater to the needs of both New Delhi and Beijing. It is believed that China and India are to become importers of more than half of the world’s energy resources, and this should cause them to synergize their strategies instead of undercutting each other. India’s Connect Central Asia policy – an initiative that was launched in 2012 – will have to keep Beijing onside.

Second, ramping up this policy could also revive the long-stalled TAPI pipeline, for which the Taliban* have been making all the right noises.

Third, this should bring greater synergy to the Shanghai Cooperation Organization (SCO) that connects Russia, India and China to the five CARs, and the SCO has already been focused on the Afghan crisis.

So just as the Russia-India-China strategic triangle has been an enduring rallying point, the India-Central Asia reconnection could emerge as another offshoot of the SCO to fine-tune New Delhi’s engagement with all these countries.

*Taliban - the movement prohibited in the Russian Federation

Do fighters returning from Syria threaten Central Asia and China?

India and Pakistan to become SCO members in June