Where did Armenian Finance Minister's sons get their millions?

A new corruption controversy is erupting in Armenia. This time it is focused on the Finance Minister Gagik Khachatryan and his sons. The online edition Hetq.am, the staff of which participated in a joint project of the International Consortium of Investigative Journalists (ICIJ), published information that in 2010, Gourgen and Artyom, the two sons of the Armenian Minister of Finance, purchased a sprawling private house in the affluent Los Angeles neighborhood of Westwood, paying $14.4 million for it. Now they want to sell it for $35 million.

This fact goes against the fight against corruption and monopolies, which was announced by the Armenian government in May. The acquisition of a luxury mansion by the sons of the high-ranking official (neither he nor his sons deny it), has deepened doubts in society about the sincerity of the government.

"There is no disclosure in the article. My sons are adults and run their business themselves. Of course, I know certain details of their business, but I think that everyone should respect the privacy of others and refrain from the publication of such information, even regarding his children," the minister said, refusing to explain how his sons were able to buy such an expensive property.

Gagik Khachatryan, who controlled the country’s tax and customs services for 8 years until his appointment as head of the Ministry of Finance, also declined to answer a question about whether he supported his sons in their business activities and the acquisition of this mansion.

In the past few years both Armenian and foreign media have repeatedly published information about Gagik Khachatryan's huge fortune, calling him "superminister".  He has never filed any defamation claims or demanded to bring any media outlet to justice. The law enforcement agencies, in turn, haven't shown any attention either to the publications nor to the scandalous statements of some opposition MPs about the minister's wealth.

The press in Armenia have linked Khachatryan with a number of food importing companies registered under the names of relatives, such as Apeyron, MegaFood, MegaMotors (the official representative of Mitsubishi in Armenia), the Alliance terminal, Ucom (satellite TV, fixed telephony, internet) and other property. 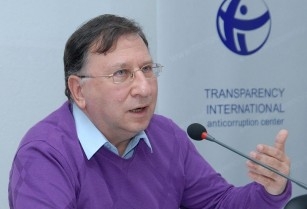 According to the executive director of the Transparency International Anticorruption Center, Varuzhan Hoktanyan, a few years ago the center appealed to the special committee on ethics in order to find out whether 'Ucom' and other companies belong to Khachatryan. The commission gave a very concise answer – "Khachatryan's sons run the business." Today, media and public organizations are addressing the same commission to receive explanations. Will the commission or the government answer the question about where Khachatryan's sons got these millions? Do they use any benefits? And finally, how is the minister involved in the business of his sons? Is it possible that the mansion was purchased as a result of the minister's sons' tax evasion or as a result of Khachatryan's abuse of power?

The answers to these questions might shed light on another controversial exposure. But, given the experience of previous years, and the fact that the scandals linked to offshore companies in Cyprus and Panama of the former Prime Minister Tigran Sargsyan and the former chief of the Compulsory Enforcement Service of Judicial Acts, Mihran Poghosyan, were quietly settled, Armenian society is unlikely to get clear answers to urgent questions. But the government will continue "its consistent fight against corruption."