Why Armenia is flirting with terrorists

The crisis in Yerevan's Erebuni district continues. There are suggestions in both Armenia and Azerbaijan that, in addition to the social subtext, the ongoing events in the Armenian capital are linked to shifts in foreign policy in the region and, in particular, the intensification of the mediation efforts to resolve the Nagorno-Karabakh conflict.

For example, there are concerns expressed on Azerbaijani social networks that the current protests in Yerevan fit into the Armenian political leadership's plan to disrupt the peace process under the mediation of Russia. Although these assumptions look like another "conspiracy theory", however  responding to the question "who benefits?", one cannot but notice the following thing. The local crisis, which has been protracted for many days, with the potential for further broader destabilization, as well as the openly anti-Russian orientation of many of the participants and the ideological inspirers of the rallies being held in Yerevan on a daily basis [including the arrested Zhirayr Sefilyan], are in fact a convenient card, which Serzh Sargsyan's team may be trying to play in the political bargaining with Moscow. The interest of the Armenian government, which came to power on the "Karabakh tide" in cementing the status quo in Karabakh, is not a secret, while the statements of the key mediating countries after the April clashes indicate their unambiguous desire to minimize the risk of a resumption of hostilities. 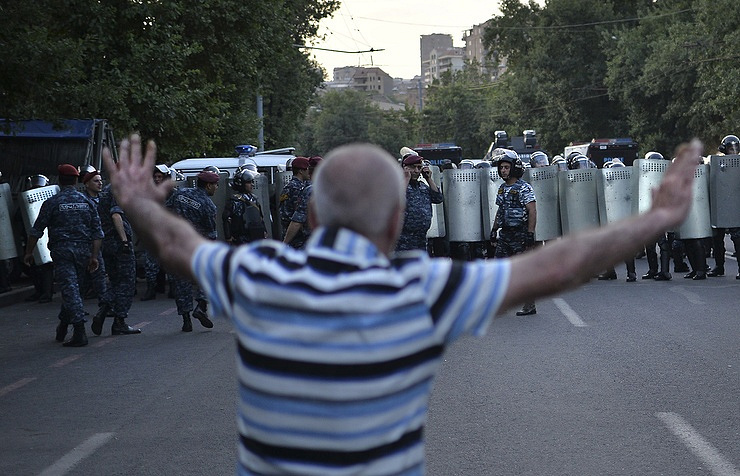 Moscow, Paris and Washington are aware that it is impossible to achieve this solely through actions to strengthen the ceasefire. Azerbaijan's acute position on the issue of strengthening the ceasefire in isolation from the "substantive" negotiations aimed directly at changing the status quo helps to understand this. In its pursuit of achieving slip negotiations, Yerevan could once again be tempted to indirectly threaten the Russian Federation — a key mediator in the conflict — with an Armenian "Maidan" and, as a consequence, the country's exit from the orbit of Russian influence. Of course, this does not mean that the Armenian authorities have deliberately allowed the police station to be captured, but the exploitation of the situation in its foreign policy interests is quite possible. Especially since Armenia has already resorted to such a policy in the recent past.

Recall that the protest movement 'Electric Yerevan' in 2015 allowed the Armenian government to negotiate certain concessions from Moscow, which included the allocation of a $200 million preferential loan to Armenia for arms purchases and the transfer the controversial case of the Russian soldier Valery Permyakov to an Armenian court. Today's events, if we exclude the openly criminal component of the 'Sassoon Braves', is reminiscent of the protests on Baghramyan Avenue a year ago. 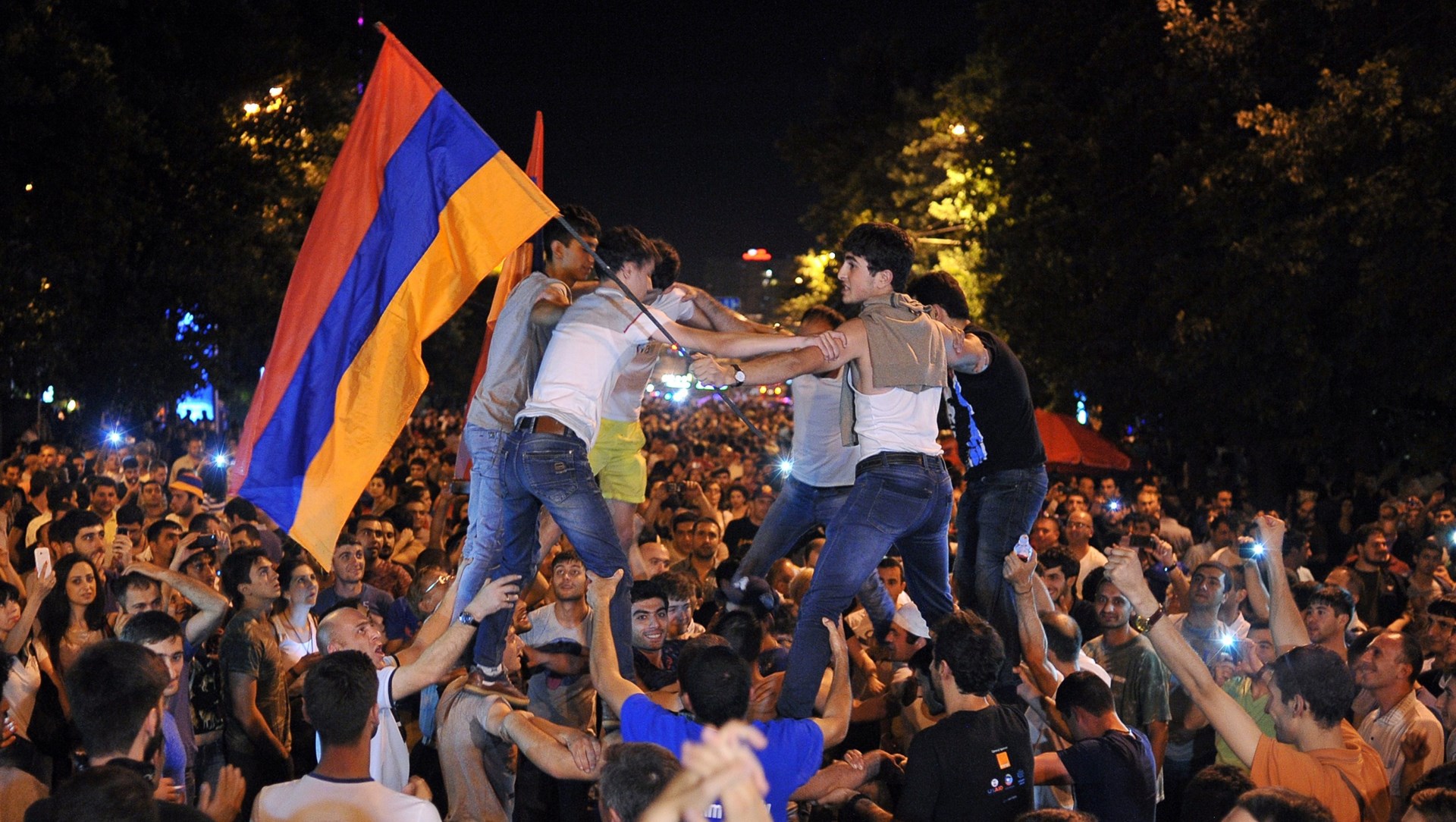 The passive response of the Armenian authorities to the seizure of the police station, the killing of a police colonel and the hostage-taking [of police officers at the beginning and then doctors] is symptomatic. Perhaps the Armenian authorities want to "hole up" and wait until public sentiments calm down. Like last year, the emphasis is on the fact that people will be disappointed in the newly-formed 'Khorenatsi movement' due to the lack of coordination and the inability to formulate a clear political program. In other words, the authorities want to provide an opportunity for society to "let off steam" and to deal with the 'Sassoon Braves' ('Sasna Tsrer') in a more relaxed atmosphere. Roughly the same scenario developed on Baghramyan Avenue in the summer of 2015. Moreover, in this case the Armenian authorities will be able to show the West that they have tried to negotiate with 'Sasna Tsrer' for many days, but the uncompromising armed group which seized hostages left the authorities no choice but to launch an assault.

The actions of the Armenian authorities are situational. Sargsyan's extremely unpopular government, with a low level of legitimacy, was initially driven into a narrow framework, therefore it did not dare to choose the military option of an instant assault to neutralize the terrorists and disperse the unauthorized rallies in ​​the police operational area. The demonstrative "tolerance" of the police toward citizens on Khorenatsi Street is explained by the authorities' fear of overreacting, which may be followed by an uncontrolled escalation of violence, an even greater radicalization of the protesters and, as a result, considerably broader support for the armed rebellion of the 'Sassoon Braves'. 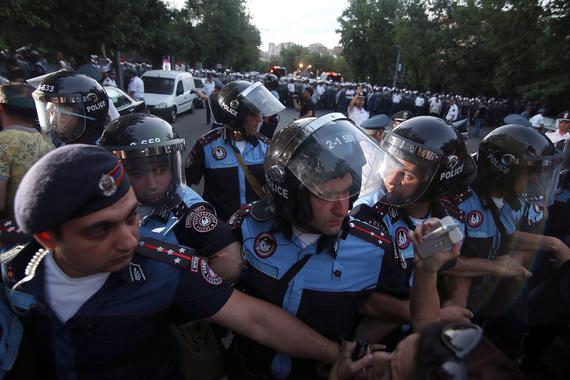 It is difficult to imagine that even most liberal legal European state [not to mention countries with authoritarian governments] would respond so spinelessly after an armed attack on a police station and hostage-taking as Armenia did. A live broadcast with terrorists? You are welcome. Food and medical care? As you please! In Russia, militants who attacked a police station would be turned from 'Sassoon Braves' into 'Sasun Corpses' in a couple of hours. The sympathy and mass rallies in support of the terrorists who killed a representative of the authorities and have taken doctors hostage are even more surprising. This suggests, at least, how much Armenian society is exposed to radicalism. It is a reason for Russian diplomacy to seriously think about the political stability of its CSTO ally in the region and its ability to effectively ensure Russia's interests in the medium and long terms.