Why is Russia establishing a naval base in Sudan? 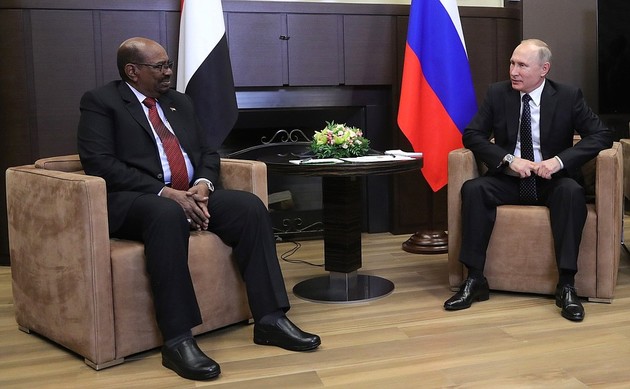 Russia’s first overseas naval base since the collapse of the USSR, demonstrates a desire to restore its global naval presence and bolster its geo-strategic foothold in the region, TRT World writes in the article Why is Russia establishing a naval base in Sudan? Russia signed a 25-year agreement with Sudan on Tuesday to establish a naval base in Port Sudan on the Red Sea coast.

The deal can also be extended in 10-year periods with the parties’ consent. A draft agreement published by Russia in November stated that the base could station up to 300 military personnel, or more and that Russia would be able to use Sudanese airspace and place temporary military posts in Sudan.

Since the 2000s, Russia has demonstrated a renewed interest in the African continent — trade and investment between Russia and African countries increased by 180 percent between 2005 and 2015.  Russia has also increased military and arms deals with African countries, as well as ones for energy and other natural resources. However, the location of the base in Port Sudan demonstrates an effort to project power beyond the continent to influence international commerce, restore its global naval presence and bolster its geo-strategic foothold in the Middle East and North Africa.

It is time to restore our naval presence

Former chief of the Russian Navy's General Staff retired Admiral Viktor Kravchenko, told Interfax in November that the base aimed to help restore Russia’s naval presence and increase the operational capabilities of the Russian fleet, particularly in a region of geo-strategic importance. "Russia will have a base on the Red Sea. This is a tense region. The Russian naval presence there is necessary...Our ships are constantly in this region and we need a basing point there," he said.

The Soviet Union had naval bases in the Red Sea and Horn of Africa, but today, Russia’s only major overseas naval base is in Syria. The US comparatively has naval bases in 18 countries, and China has one in Djibouti, but may be planning others. The war in Yemen prevented an attempted agreement for a base near the Bab al Mandab strait, while talks with Djibouti fell through due to the location Djibouti proposed for the base, as well as the prohibitive construction costs.

Russia then turned its focus to Sudan, with which it had been in talks regarding military and security cooperation for several years: when the former President of Sudan, Omar al Bashir, visited Moscow in 2017, the two countries agreed to launch “a program to modernise [Sudan’s] armed forces.” At the time, Bashir also said that he had discussed the possibility of setting up a Russian military base on the Red Sea. “This is an expansion of opportunities for our fleet. It is time to restore our naval presence," said another retired admiral, Vladimir Komoedov.

Why is the Red Sea so important?

The area is rich in natural resources like gas and gold, and home to two critical choke points in global trade: the Suez Canal and the Bab al Mandab strait. Furthermore, in the past two decades, the Red Sea and the Horn of Africa have also become a location for foreign military base development and deployment.

Countries like Saudi Arabia, the UAE, Turkey, and Qatar have all established or planned naval and military bases in Sudan, Eritrea, Somalia, and Djibouti. Several non-regional powers—France, Japan, Russia, the United States, and Italy—also have military or support bases in the region. The presence of all these competing powers and interests has created a complex strategic order as they compete for regional hegemony.

Meanwhile, Asian giants, India and China, have increased their military footprints in the western Indian Ocean, further complicating strategic relations. China, a relative newcomer to the area, is establishing strategic relations with countries in the geography through the maritime aspect of its Belt and Road Initiative (BRI), called the Maritime Silk Road (MSRI).

Even though the draft agreement stated that the naval base “meets the goals of maintaining peace and stability in the region, is defensive and is not aimed against other countries," the construction of the base cannot be divorced from the commercial and geopolitical realities of the region.

Sudan remains open to naval base deal with Russia

Sudan says to review naval base agreement with Russia