Zelensky offended by Merkel because of Putin 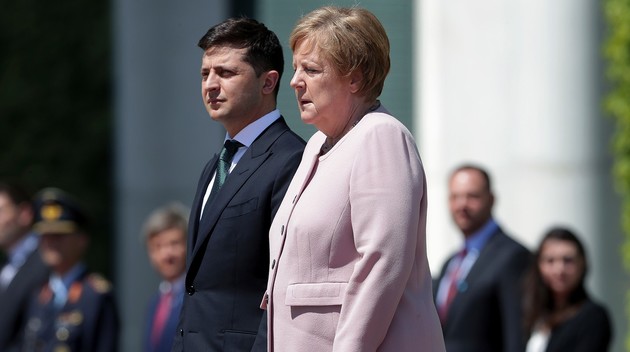 The meeting between Russian President Vladimir Putin and German Chancellor Angela Merkel was considered by many to be declarative. Few expected any serious agreements, and the two politicians really did not sign them. But in one country they were still offended by the outgoing Chancellor Merkel.

On June 20, Angela Merkel visited Moscow for the last time as chancellor. According to the politician's calculations, this is the 16th visit in her 16 years of rule by Germany. Journalists counted more, but the essence is not important. Most importantly, the two presidents, as Putin said, are always in telephone contact. Such close contact is necessary between the strongest countries in Europe, even if there are a lot of problems between them now. Here is an incomplete list of disagreements: the FRG's non-recognition of Crimea as Russian, the unresolved conflict in Donbass, Berlin's claims to arrest Navalny, restrictions on the work of German NGOs in Russia, and so on.

Despite all the difficulties, Frau Chancellor says that differences need to be resolved and resolved through dialogue. It was very symbolic that the Chancellor laid flowers at the Tomb of the Unknown Soldier. For this act, Merkel could be forgiven for many mistakes in relation to Russia. Such a mature and pragmatic dialogue between Putin and Merkel greatly strains politicians in Kiev, who believe that the German Chancellor should solve all their problems. After meeting with Putin, Merkel went to Kiev. Unlike Putin, who greeted her with honors and flowers, none of the high-ranking officials came to the airport of the Ukrainian capital - neither the mayor of Kiev, nor the president of Ukraine.

Moreover, before Merkel got off the plane, claims from the President of Ukraine Volodymyr Zelenskyy already flew to her - he accused the Chancellor of an inadequate policy towards Russia, so that the German journalists themselves drew attention to the fact that in Kiev their head of government greeted, to put it mildly, "modestly". German journalist Jörg Blank suggested that Kiev probably expects that after the September elections the "greens" will be at the helm of the Bundestag, and they know how to speak harshly with Moscow. It is difficult to say whether it is true or not. The latest polls show that it is unlikely that Merkel's Christian Democratic Union (CDU) party will lose its leading role, given that 25% of voters are ready to vote for it, 20% for their coalition partners from the Social Democratic Party of Germany (SPD), and "green" - 18%. At best, the Greens can count on the role of junior partners, be it with the CDU or the SPD.

What's more obvious here is that Kiev politicians seem to be finally disillusioned with Merkel and her willingness to swear at Putin. In fairness, it should be noted that the chancellor in the Kremlin did not hesitate to raise all acute issues - she reminded about the "annexation of Crimea", demanded to speed up the Minsk process to return Donbass to Ukraine, and pointed out the topic of preserving Ukrainian transit after the completion of the Nord Stream 2 gas pipeline. But this is not enough for Zelensky. He does not understand that on the other side of the barrier is Vladimir Putin, the leader of the strongest country. And with him, Merkel speaks not as with the president of a banana republic, but on an equal footing. If politics is where the art of the possible, it is here.

Zelensky also does not understand that Nord Stream 2 is an economically important project for Germany, that Merkel cannot force Moscow to maintain the Ukrainian transit of Russian gas, when, as Putin correctly says, there is no guarantee that Europe will buy these surpluses after launch of Nord Stream 2. In a word, Ukraine is offended by Germany. And offended for a number of reasons.

First, Kiev did not like the fact that Merkel was able to come to an agreement with Joe Biden, and the American lifted the sanctions against Nord Stream 2. Secondly, he was upset that Germany did not fit in for him when Zelensky was preparing an intervention in Donbass. It is also annoying that Berlin, together with Washington, does not want to accept Ukraine into NATO. And, probably, the final nail in the coffin of German-Ukrainian friendship - Merkel refused to go to the Crimean Platform forum, where Ukrainians, together with the governments of 45 countries, will fantasize about how to help Ukraine return Crimea.

In fact, this approach proves that, in fact, Merkel has resigned herself, and she recognizes Crimea as de facto Russian. It can be assumed that after the September 26 elections in Germany, relations with Ukraine are unlikely to improve at such a pace. Unless, of course, a miracle happens and the "greens" take power into their own hands. Armin Laschet, the next likely chancellor and successor to Merkel, is also pragmatic towards Russia, and Zelenskiy can hardly count on more loyalty under his rule than under Merkel.