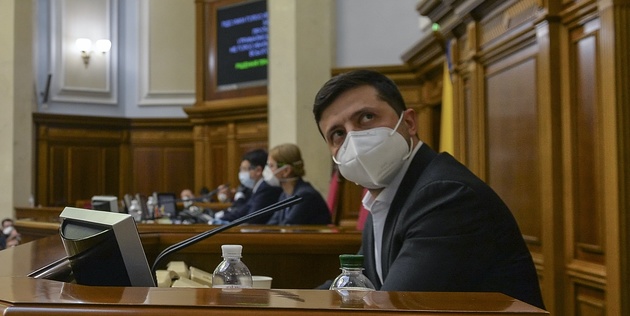 Ukraine's parliament has adopted two laws needed for IMF loans: a law on the farmland market and a law preventing former owners of banks declared insolvent from regaining their assets. It was unusual - the decision was made during a night meeting of MPs.

In the afternoon, despite the request of President Vladimir Zelensky to adopt the laws, the MPs did not even consider them. On the agenda of the meeting was anything but the bills vital for Ukraine. However, the MPs failed everything else on the agenda of the meeting as well. The only thing they discussed with enthusiasm was measures to counteract the coronavirus outbreak, especially parts related to teleworking. It seems that they even managed to achieve a convenient work schedule for themselves.

But perhaps there are other forces in Ukraine that take the country's gloomy economic prospects much more seriously. Kiev sources told Vestnik Kavkaza that in the second half of Monday the entire "government quarter" was cordoned off to prevent the MPs from dispersing, if they did it would be impossible to make them discuss the ill-fated two laws — which is the IMF’s terms for allocating tranche to Ukraine. But another source of Vestnik Kavkaza in Kiev suggested that it was sealed off for an opposite reason - in order to prevent the opposition or nationalists from organizing their actions when MPs would pass unpopular laws imposed by the IMF. However, if we look at the events in terms of time, it looks more like that the first source is right. Because when the security forces entered the "government quarter", the MPs did not even think about discussing any of the two laws.

Discussions began late at night. By that time, Vladimir Zelensky entered the parliament and reminded the MPs once again that Ukraine is doomed to default and an unprecedented long economic crisis without the IMF. "It is really important for us, to sign the memorandum with the IMF, and you know well that the two main conditions were the land law and the banking law," Vladimir Zelensky said.

There was something going on in the sidelines as well. What it was exactly is not known. It could be the fact they cordoned off the quarter or Zelensky's speech, but later in the afternoon, the obstinate MPs became flexible and got down to business. Both laws were adopted in a short time, while the MPs set a record  by holding three meetings on the same day. However, the experts saw this as a violation of the regulations with its consequences  - certain forces may try to take advantage of this and declare all Verkhovna Rada's actions on that day unconstitutional.

Yulia Tymoshenko, one of the main opponents of selling farmland said: "They scare us with default to take the last from Ukrainians ... We will not only return Ukrainian land to people, but we will also bring to justice - not only political, but also criminal - everyone who stood behind this scam, starting with President Zelensky."

Yulia Vladimirovna is not alone on this. She is supported not only by her Batkivshchyna party, but also by the Opposition Platform - For Life bloc. And of course, the part of Ukrainian society, which, according to one of the MPs, "now clearly understands what our vaunted independence is worth." But experts believe that Vladimir Zelensky, who has stubbornly pushed the adoption of "bad laws," is urgently required to prove he's right  by achieving economic success in the shortest time possible. Otherwise, power transition processes may once again begin in Ukraine closer to the fall.

To complete the picture let me recall you the essence of the adopted laws. The banking law prevents the former owners of banks that were nationalized from regaining ownership rights. At the same time, the National Bank received additional powers to prevent such scenarios. Former owners of banks can receive compensation if they can prove that banks were illegally nationalized.

The land law was adopted in a slightly modified form, depriving it of "universalism." Only a Ukrainian citizens can buy a land plot with the area of up to 100 hectares. But there are reservations in the law, suggesting that after 2024 the purchasing opportunities will be significantly expanded and qualitatively changed.

Expectations of Ukraine and Belarus from Mike Pompeo's visit