Foundation of a bipolar world laid in Shanghai 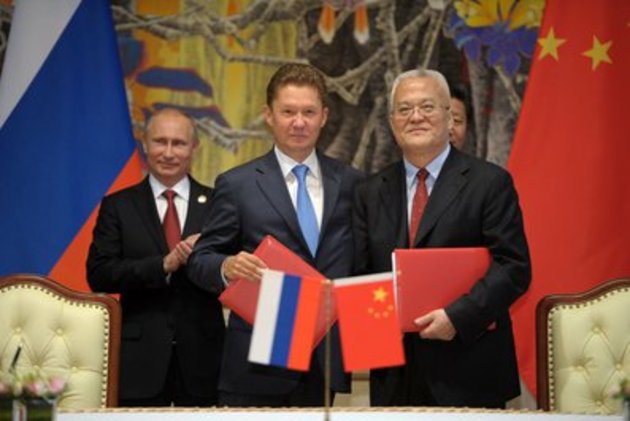 Yesterday Gazprom and CNPC signed a contract on supplying gas to China. The price of the contract is $400 billion over 30 years; the volume of the supply is 38 billion cubic meters annually. Vladimir Putin called the signing a milestone event in the gas sphere of Russia and even the Soviet Union. This is the biggest contract in the history of the gas sphere of the former USSR and the Russian Federation. “This is not only gas production, but a helium plant, new enterprises, thousands of modern high-tech jobs, and development of the infrastructure of gas fields and transport,” Putin said. “It will give us an opportunity to fulfil our plans for the development of the gas sphere in Russia, connecting the eastern and the western parts of production, infrastructures, and to provide diversification of exports from the West to the East and from the East to the West.”

Experts don’t see threats to Europe in the Chinese contract of Gazprom, as the supplies have different resource bases; while US Secretary of State John Kerry stated that the contract between China and Russia wasn’t connected with the Ukrainian situation.

Vladimir Yevseyev, the head of the Caucasus Department of the CIS Countries Institute, disagrees with Kerry. He told Vestnik Kavkaza that Putin’s visit to China is historically important for the whole world: “As the Ukrainian crisis is deepening and marking an unprecedented confrontation between Russia and the West, Russia and China make a statement that they are ready to resist the pressure. Probably it won’t be provided directly and China couldn’t speak about this anywhere, but it is obvious that Russia and China are ready to resist the dictatorship and outrage of the USA. This is a historic role of the visit to Shanghai by Vladimir Putin.”

Commenting on the session of the Conference on Interaction and Confidence-building Measures in Asia, which is taking place in Shanghai, Yevseyev noted: “China is now the chair of the Conference. And from this point of view it is important for China that a foundation of a bipolar world was laid in Shanghai. Of course we have no bipolar world yet; it is forming. But I am sure that we have no unipolar world already. And it was important for the transition stage from the unipolar to a bipolar world that the leaders of Russia and China coordinated their positions and approaches to the world that we needed.”

According to Yevgeny Minchenko, Director of the International Institute for Political Expertise, the Chinese epoch in the post-Soviet space began long ago: “Speaking about Central Asia, China’s influence is very serious there; and now it is growing. A perfect example of development of the Chinese position in the region is the way it redirected all gas flows of Turkmenistan to China. Considering the financial power of Beijing, its interest in infrastructural projects and readiness to play long-term in the geopolitical game, China will continue to strengthen its positions.”

Adil Kaukenov, a senior analyst at the Agency for Research into the Viability of Investments, thinks that China is increasing its presence in the South Caucasus and Central Asia due to construction of alternative transport routes for further economic expansion. That’s why it needs peace in the region. “The land route through the Caspian Region and the Caucasus is vitally important for China, as it could obtain energy resources using the route, and safely export goods to Europe.”

Kaukenov believes that it is significant for China that alternative transport paths are stable. Central Asia is called China’s western home front. “China is the second economy of the world. This is a major investment player. It is ready to invest in real profitable projects. And in this sense China is present in the South Caucasus and the whole world. At the same time, the presence is limited by underdevelopment of land routes. The Caucasus is oriented toward Europe at the moment. However, there are routes though Central Asia, for instance Kazakhstan; when Port Aktau is launched China will have an opportunity to come to the Caucasus in a large-scale format. The prospects are great.”