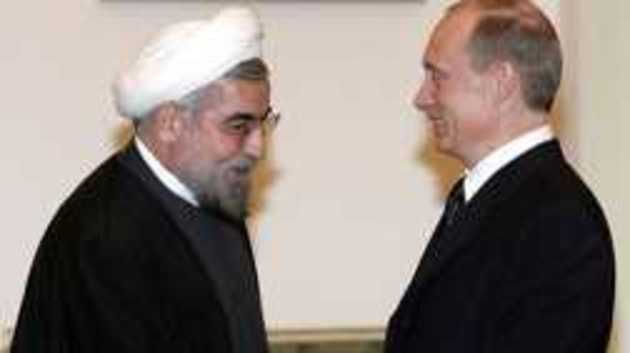 In the middle of August the President of Russia will visit Iran. The President's press secretary Dmitry Peskov told Vestnik Kavkaza that the execute date of the visit hasn’t been determined yet, but preparations were underway. Vestnik Kavkaza interviewed Russian experts who believe that Vladimir Putin has a lot to talk about with the new Iranian president Hassan Rouhani.

According to the head of the Center of Socio-Political Studies, Vladimir Yevseyev, “the main goal of the visit is building relations with the new president Hassan Rouhani. Speaking about political issues, first of all they will discuss the problem with the S-300 missile complexes. At the moment, Iran is appealing to a court, trying to get $4 billion from Russia. It is not only because Russia didn’t implement the contract on S-300 exports, but also because Moscow didn’t fulfil a series of contracts in the mid-1990s. This problem prevents development of bilateral relations. Russia thinks it can be fixed by exporting the S-300 missile complex “Antaeus 2500.” Technically this complex cannot be included in the contract signed by Dmitry Medvedev. Export of the complexes is interesting for Iran itself, because they are more about missile defense, than about air defense. So such a solution is acceptable.”

Moreover, Yevseyev thinks that Putin and Rouhani will have to discuss the problem of construction of power reactors with a capability of no less than 1 GW on two free sites at the Bushehr Atomic Power Station: “A lot will depend on whether Iran is ready to pay real money or if it will be a credit from the Russian Federation.”

According to the head of the Middle East Institute, Yevgeny Satanovsky, the main topic of the Russian-Iranian agenda is still the nuclear program: “Of all the negotiators, Russia has the closest relations with Tehran. Moreover, we have the problem of military supplies and Iran’s lawsuit for $4 billion. There are plenty of issues which can be discussed by Vladimir Putin.” Satanovsky likes the new president of Iran because “the former was too brutal and caused many problems for relations between Iran and the rest of the world; and it was difficult to work with him. The new one at least smiles.”

The senior scientist of the Oriental Studies Institute of the RAS, political scientist Vladimir Sazhin thinks that Putin “uses this visit as an opportunity to meet the Supreme Leader of Iran. Iran is a very important country, without which regional problems cannot be discussed; the country influences the Israeli-Palestinian problem, the problem of Lebanon, I mean Hezbollah, the problem of Iraq, the problem of Afghanistan, and of course the problem of the Caucasus, as one can say that Iran is a Caucasus country. Iran also influences the security of the Persian Gulf. Of course Syria will be discussed.” As well as his colleagues, Sazhin thinks that the nuclear problem will be the main topic of the discussion.

At the same time, one of the serious problems of Russian-Iranian relations is the Caspian Sea.

“The fourth summit of the Caspian states should take place this year. Ahead of it, it is too early to speak about any progress,” Vladimir Yevseyev thinks. “They can only specify their positions, because Iran treats the problem of the Caspian Sea and its status firmly. It seems that Hassan Rouhani can take a less strict position. Maybe agreement on approaches is possible here. We should realize that there is not much time before the visit. It is impossible to prepare any serious treaties in this time. The point is in settling the problems which have accrued and that prevent development of bilateral relations. In fact, the real position of Iran on the Caspian Sea will be determined during the fourth summit of the Caspian states. It will take place in Russia.”

Yevgeny Satanovsky thinks the problem of the Caspian Sea is hard to solve: “No reasonably sober Russian president will reject control over the Caspian Sea, the surface and bottom, which is required by the Soviet-Iranian treaty. No Iranian president will refuse 20% of the Caspian Sea. Remember Zhvanetsky: “Madam, why does everybody sell candies for 10 cents, but you – for 20 cents?” – “Because 20 is bigger.” In this situation Russia, Kazakhstan and Azerbaijan stand for one position; Iran stands for the other position; Turkmenistan is between us and Iran. As the Iranian option promises more benefits for Ashkhabad, sometimes it supports Iran. When it needs our gas, it supports our position. But the problem is too serious to discuss. I don’t think Vladimir Putin loves Iran so much that he would be ready to give up a significant part of the Russian sector of the Caspian Sea with its gas and oil, not mentioning the political importance of the step. Then, why don’t we give the Kurils to Japan?”

However, Vladimir Sazhin thinks that it is necessary to discuss the Caspian problem: “There is an opinion that Putin will arrive in Iran through the Caspian path, i.e. by ship to Port Anzali and from there to Tehran. The Caspian issue is very important. The states involved are interested in settling the problem. The views of Russia and Iran are different on some aspects, including the division of the Caspian Sea. There is a lot to discuss.”