Roundup of 2014 for Azerbaijan 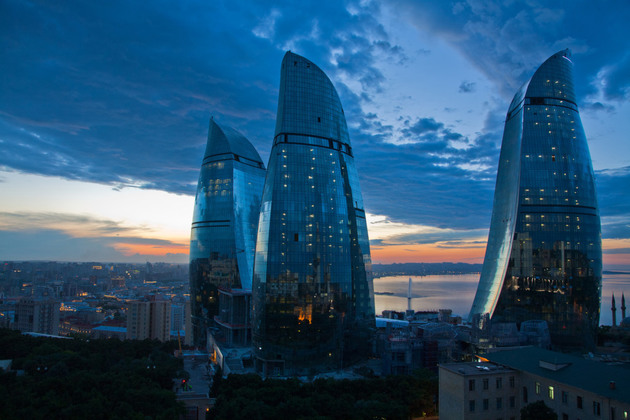 2014 has not been an easy year for Azerbaijan. Despite the lack of outer signs of arising problems and continuing political and economic stability, the country faces serious challenges associated with regional and world conjunctures.

Falling oil prices will inevitably affect the economic growth rate of the country, the budget of which depends on oil exports to a great extent. The Asian Development Bank changed its forecasts for economic growth from 4.8% to 3.5%. BP-Azerbaijan made redundancies as a result of a global staff reframing in British Petroleum, provoked by lower oil prices. The company has not published detailed figures on the redundancies yet.

The ruble rate has had a negative impact on the national economy. Vugar Bayramov, the head of the Center for Economic and Social Development, said in an interview with Echo that losses had been caused by falling cash transfers. "Over 2 million Azerbaijanis live in Russia. According to official data, over $1 billion was transferred to relatives in Azerbaijan. This year, the sum may quite likely drop by 30% and total $700 million," he stated.

The "safety net", incarnated by gold reserves worth $53 billion, will save the population of the country from global economic upheavals even taking into account the negative factors mentioned. President Aliyev has recently promised that the population would not experience the falling oil prices. Moreover, the country is preparing for the European Games, a mass and costly continental sports festival. Simultaneously, the reduction of world prices for energy and gradual reduction of oil extraction should encourage the ruling elite to speed up diversification of the national economy.

The key trends in 2014 can briefly be described as follows: escalation in the Nagorno-Karabakh zone, cooling of political relations with the West, continuation of the course for close partnership with Russia, struggle for access to the European gas market, combating religious extremism within the country, an attempt at "a reboot" in relations with Tehran, the fall of prices for oil as a challenge to the national economy.

As in 2013, the alarming tendency of this year is the activity of Azerbaijani citizens in the ranks of ISIS. There are no exact figures of Azerbaijanis fighting for radical Islamists in Syria and Iraq. However, regular articles about Azerbaijanis citizens killed in the Middle East say that the stream of new recruits from Azerbaijan to Syria and Iraq is steady.

At least 8 Azerbaijanis died in Syria in the first 10 days of 2014. Over 100 died in early 2014. There is no detailed information about the number of citizens killed in Syria and Iraq. The situation remained especially bothersome until the end of summer 2014, when ISIS reached the peak of its financial and military power, attracting new fighters from all over the world, the international coalition against the terrorist organization had not been created yet.

Law enforcers are scrupulously monitoring the situation that cannot leave the Azerbaijani authorities indifferent. Information about Azerbaijani territory being a part of the Islamic Caliphate stirred up the country. In late September, the Ministry for National Security initiated a high-scale operation against ISIS members and detained 26 people recruiting new militants and taking part in combat abroad. Grand Mufti of the Caucasus Allahshukur Pashazadeh admitted in his interview with Turan that many Azerbaijanis had been members of ISIS in Syria. Official and unofficial efforts and means discouraged them from participating in the war, according to Pashazadeh.

In any case, Azerbaijan will have to face the threats from world terrorist organizations next year, especially taking into account the preparations for the first European Games in history.

2014 was marked by unprecedented escalations on the contact line of the Azerbaijani and Armenian forces. Intensive fighting about to reach a full-scale war in early August were the most bloody incidents since the ceasefire agreement signed in 1994. According to official information, both countries lost over 20 soldiers each.

Russian President Vladimir Putin organized an urgent trilateral meeting with his Azerbaijani and Armenian counterparts in Sochi on August 10. Some time later, the tensions eased.

Nagorno-Karabakh expert Thomas de Waal said that the helicopter crash was the worst incident since the signing of the Bishkek protocol. At the same time, peace talks within the framework of the OSCE MG do not guarantee any success. It is exceptionally symptomatic that the latest meeting of Presidents Serzh Sargsyan and Ilham Aliyev in Paris, where the co-chairs of the Minsk Group had mentioned positive impulses, was followed by mass drills on the frontline zone with 40,000 soldiers involved. The story ended with the helicopter's destruction. That is where the "positive impulses" end, perhaps.

Relations between Azerbaijan and the West are not as soft this year as they were the previous year. Western human rights organizations and politicians have been paying special attention to the arrests of Western-aligned civil activists. Within several months, Azerbaijan has jailed Leyla and Arif Yunusov of the Institute for Peace and Democracy, Radio Svoboda journalist Hadija Ismaylova, and activist Rasul Jafarov. Emin Guseynov, the head of the Institute for Reporters' Freedom and Safety, is allegedly hiding from Azerbaijani law enforcers at the Swiss embassy in Baku. The Azerbaijani police claim that not all the human rights activists were always legally sponsored by Western funds and embassies.

The Azerbaijani government says that Western countries under U.S. leadership are planning an Orange Revolution. U.S. ex-Ambassador Richard Morningstar's statements about a possible Euromaidan in Azerbaijan was interpreted by the ruling elite almost as a direct threat. Academician Ramiz Mekhtiyev, the head of the Azerbaijani Presidential Administration, published an article in late 2014, accusing the U.S. of financing dissidents in Azerbaijan. The Azerbaijani rhetoric towards the U.S. can hardly be called friendly today.

Thus, the government of Baku prevents all attempts at foreign influence on the internal political situation in the country, which it associates with allegedly illegal sponsoring of national NGOs by foreign funds. The West explains that the arrests of the mentioned activists were what caused public outrage against the Azerbaijani government.

Despite the political ups and downs, energy cooperation between Azerbaijan and Western countries continues its dynamic development. On September 20, Azerbaijan founded the Southern Gas Corridor. It will be a project using the Trans-Anatolia Pipeline (TANAP) to deliver gas to the European border through Georgia and Turkey. It will then be transported through Greece and Albania to Italy using the Trans-Adriatic Pipeline.

SOCAR's purchase of Greek gas transport operator DESFA has been halted by the European Commission due to fears that it would undermine competition law.

Intensification of cooperation with Russia

LDPR leader Vladimir Zhirinovsky visited Baku in the autumn and called Azerbaijan a reliable partner. Considering the politician's infamous statements about Azerbaijan, the rhetorical change of the scandalous Russian politician was unsurprising.

Russia's ban on European food created new opportunities for Russian-Azerbaijani cooperation in agriculture. Azerbaijani economist Vugar Bayramov says that it will partly compensate for the dwindling cash transfers from Russia to Azerbaijan. "The problem is that the countries exporting products to Russia, including Iran, have not joined the sanctions. Hence, unlike the Western neighbours of Russia, Azerbaijan cannot win from re-exports (unlike Belarus)," the economist explained.

Rosneft and SOCAR signed a deal in May to create a joint venture for exploration and extraction of oil and gas in Azerbaijan and Russia. Russian President Vladimir Putin attended the ceremony of the signing. The countries emphasized their plans to cooperate in the energy sector.

Indisputably, the defense industry will be interested in intensifying cooperation with Azerbaijan in 2015 in the light of the demand for foreign currency in Russia. Azerbaijan will spend $4.2 billion on national defense next year.

Moscow remains indifferent to Armenian clarion protests against Russian shipments of weapons to Azerbaijan. One of the reasons for such neglect is the constant dalliances of the Yerevan authorities with the European Union. Yerevan refused to sign the EU Association Agreement at the Vilnius summit at the very last minute. Surprisingly for the Europeans and Armenians themselves, President Sargsyan made a sudden visit to Moscow and declared the course towards joining the Customs Union, killing European prospects.

Obviously, Russia has made it clear that the reorientation of Yerevan towards the West will mean that it will stop keeping Azerbaijan from a starting a military operation to de-occupy Nagorno-Karabakh and the adjacent territories. Russia has already supplied Baku with enough advanced weapons for such an operation.

Baku is obviously putting its bets on Moscow to resolve the Nagorno-Karabakh conflict, take control over the territories and the the 7 adjacent districts. Ordeals in the international arena and sanctions have not discouraged Azerbaijan from cooperation with Russia. Belarus, Kazakhstan and Armenia prefer to distance themselves from Moscow to minimize risks. Belarusian President Alexander Lukashenko's rhetoric towards Russia has become harsher. His visit to Kiev with Nazarbayev and promises to provide Ukraine with any aid gave rise to many questions in the Kremlin. Armenian nationalists have recently been talking more often about the fall of Russia and the need for reorientation of the Armenian national policy.

Relations between Azerbaijan and its southern neighbour have always been quite warm and brotherly, despite many stumbling blocks on the way. Visits by MPs, clergy and military and media reports are not characterized by as many compliments as the presidential meetings. Iran is extremely sensitive to Azerbaijani-Israeli cooperation in the military sector, Azerbaijan in its turn is disappoined with rapidly-developing Armenian-Iranian ties.

The tranquility around the Iranian nuclear problem and the exclusion of the military intervention scenario have had a positive effect on Iranian-Azerbaijani relations. Despite countless verbal and written guarantees by Azerbaijan that its territory will not be used for a military operation against Iran, relations between Iran and official Baku were quite complicated in the years of the "hot phase" of the Iranian issue.

Iranian President Hassan Rouhani's election and the improvement of Iran's image in the world have stimulated relations between Tehran and Baku. Presidents Ilham Aliyev and Hassan Rouani made mutual visits to their capitals in 2014. High-ranking delegations have been exchanged throughout the year. The intensity of contacts between the political elites of the two states has increased multi-fold since 2007.

Problems in partitioning the Caspian Sea, Azerbaijani-Israeli and Iranian-Armenian cooperation have not been solved yet. No breakthrogh documents and declarations have been signed, the trade turnover between the two states will probably exceed $500 million this year. On the other hand, a lot in commerce may change after the launch of the Qazvin-Rasht-Astara Railway in early 2015. The railway is part of the North-South project to integrate the railway lines of Russia, Azerbaijan and Iran.

Overall, Iranian-Azerbaijani relations have not been filled quantitatively, despite intensification of bilateral contacts and reduction of negative media reports against each other.