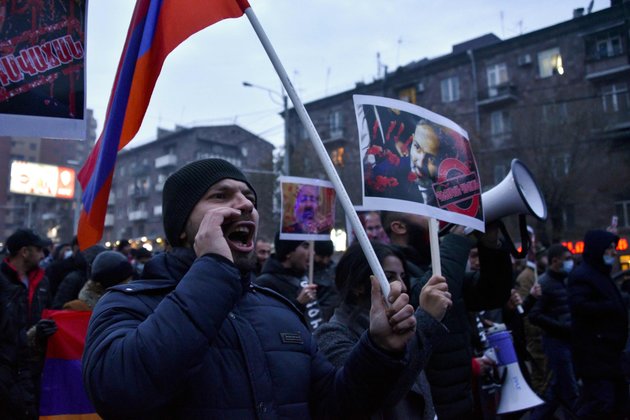 Armenian Prime Minister Nikol Pashinian's efforts to distort details of the Nagorno-Karabakh cease-fire deal between Baku and Yerevan that ended six weeks of fighting over the region may jeopardize the peace process, Daily Sabah writes in the article Armenian PM Pashinian jeopardizes peace process by distorting Karabakh deal. Pashinian is questioning the status of territories liberated by Azerbaijan from nearly three decades of Armenian occupation by indicating that the border between the two countries should be redrawn.

The Armenian prime minister said the complete handover of Zangilan and Qubadli to Baku was not mentioned in the cease-fire deal and added that the handover of these two settlements should be limited to the point where Azerbaijani forces reached during their advance in the conflict. “We have been conducting talks with Russia on this issue. Our defense minister conducts talks with Russian defense minister Sergei Shoigu in Moscow on the question of who should control Zangilan’s and Qubadli’s areas close to the Armenian border. Several solution plans are emphasized,” Pashinian said Monday.

Nagorno-Karabakh lies within Azerbaijan but was under the occupation of Armenian forces since a separatist war there ended in 1994. That conflict left not only Nagorno-Karabakh but also substantial territories around it in Armenian hands. Heavy fighting erupted in late September and marked the biggest escalation of the decades-old conflict between Armenia and Azerbaijan, killing more than 5,600 people on both sides.

A Russian-brokered peace agreement that took effect Nov. 10 halted the violence and stipulated that Armenia hand over control of some areas it holds outside Nagorno-Karabakh’s borders to Azerbaijan. Baku also retained control over areas of Nagorno-Karabakh it has taken during the conflict, and both sides agreed to exchange prisoners, hostages and the bodies of the victims of the fighting. In accordance with the agreement, nearly 2,000 Russian peacekeepers have been deployed to Nagorno-Karabakh under a five-year mandate.

The peace deal was celebrated in Azerbaijan as a major triumph, and last week a massive military parade was held in Baku to mark it. In Armenia, the truce sparked outrage and mass protests, with thousands regularly taking to the streets to demand the ouster of the country’s prime minister over his handling of the conflict. Pashinian has defended the deal as a painful but necessary move that prevented Azerbaijan from overrunning the entire Nagorno-Karabakh region. Thousands of people rallied in the Armenian capital, Yerevan, once again on Monday, chanting “Nikol, go away!” and “Armenia without Nikol!”

Historic opportunity that Armenia should not miss