Attempts to distinguish between good and bad terrorists are felonious

On April 26th, the Russian delegation presented a request to the UN Security Council Committee for Sanctions against Daesh and al-Qaeda to include two organizations, Ahrar ash-Sham and Jaysh al-Islam, into the sanction list of the subsidiary body of the UN. Meanwhile, according to the Russian permanent envoy to the UN, Vitaly Churkin, these groups fighting in Syria are closely connected with terrorist organizations, support them financially, technically, and military, as well as receive a support from them. Including of the groups into the list of the UN SC Anti-terrorist Committee would withdraw them from the ceasefire regime in Syria and enable to attack them.

The head of the Russian Defense Ministry, Sergey Shoigu, stated at the 5th Moscow Conference on International Security that any attempts to make advances to terrorists, distinguish between goodies and badies, and moreover, arm them for reaching selfish political goals are not only shortsighted, but also felonious. “Our main goal is to stop terrorism at the distant approaches, stop it from infiltrating our country. We are resolving this task in Syria, where in full compliance with international law, at the request of the legitimate leadership, we are supporting the Syrian army in the fight against Daesh, Jabhat al-Nusra and other criminal groups,” Shoigu said.

According to him, the liberation of Palmyra became a turning point in the armed conflict in Syria. Now it is necessary to create the conditions for the restoration of this monument of world heritage: clear it from mines, ensure safety and normal working conditions of UNESCO experts. Since early April about 100 Russian military experts have completely cleared the architectural and historical part of Palmyra of mines, and started to clear residential areas and the airport of explosives. They are going to clear out 560 hectares of city buildings. 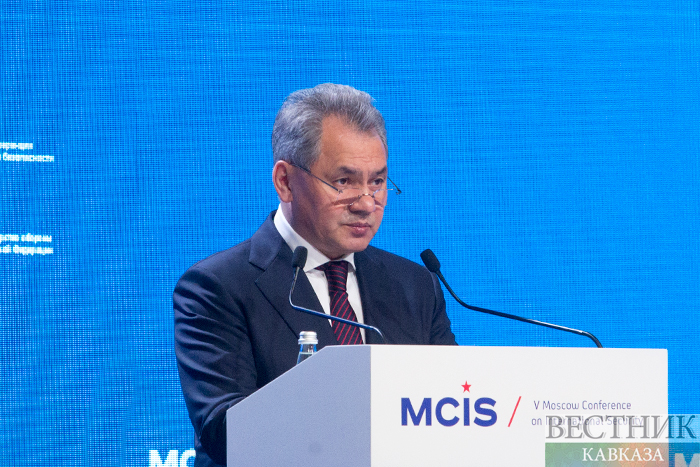 Moscow counts on the practical support of all states, the United Nations, including its specialized agencies, as well as regional centers for humanitarian demining.

“We often hear from our western colleagues that as soon as Assad leaves, the bloodshed in Syria will stop! And the coalition led by the United States will support Russia after that. However, it is hard to believe in these 'good intentions'. The question arises: then who prevented the restoration of peace and the establishment of order in Iraq and Libya after the elimination of Saddam Hussein and Muammar Gaddafi?” Shoigu wonders.