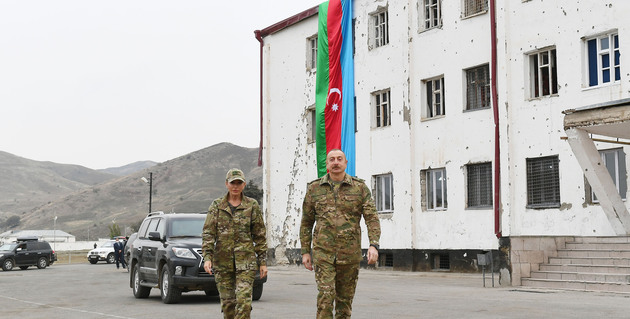 A convoy of Azerbaijani military trucks entered the Lachin district overnight, taking over the last of three regions around Karabakh handed over by Armenia under the Russian-brokered agreement, Al Jazeera writes in the article Azerbaijan fully reclaims lands around Nagorno-Karabakh. AFP journalists saw soldiers raising the Azerbaijani flag over an administrative building in the town of Lachin in the early hours of Tuesday.

Armenia agreed to hand over the three districts – Agdam, Lachin and Kalbajar – as part of the November deal that stopped a conflict that had flared up between the two countries at the end of September. Under the agreement, some 2,000 Russian peacekeepers deployed between the two sides and along the Lachin corridor, a 60km (37-mile) route through the district that connects Karabakh’s main city Khankendi to Armenia. Russian military vehicles accompanied Azerbaijani trucks driving along the corridor overnight and were deployed at the main crossroads in Lachin. Most of the town’s residents fled in advance of the takeover, but 48-year-old Levon Gevorgyan, the owner of a local grocery store, said he had decided to stay.

In a televised address on Tuesday, Azerbaijan’s President Ilham Aliyev celebrated the dawn of “a new reality”. “We’ve driven the enemy out of our lands. We’ve restored our territorial integrity. We’ve ended the occupation,” he said.

Nagorno-Karabakh broke from Azerbaijan’s control in a war after the 1991 collapse of the Soviet Union that left some 30,000 people dead. The self-proclaimed republic was never recognised by any country, including Armenia.

The peace accord signed on November 9 was reached after six weeks of fighting that saw Azerbaijan’s army overwhelm Armenian-backed forces and threaten to advance on Khankendi. Under the agreement, Armenia is losing control of seven districts that it seized around Karabakh in the 1990s, it has also lost the key town of Shusha.

Aliyev said that nearly 50,000 Azerbaijanis had lived in the Lachin district before the 1990s war and that they would be returning in “the nearest future”. In Baku on Tuesday, crowds carrying Azerbaijani flags celebrated the takeover of Lachin, an area glorified in a popular Azerbaijani folk song.

Olesya Vartanyan of the International Crisis Group told AFP that while the handover of the last district signalled that the peace deal was “working”. “The Moscow-brokered agreement is very precise when it comes to the territories’ handover, but is ambiguous on a number of aspects such as the mandate of Russian peacekeepers and how the life of the local population, both Armenian and Azerbaijani, will be organised,” she said.

Meanwhile, Russia and Turkey have agreed to monitor the truce from a joint peacekeeping centre, the Turkish defence ministry said. The deployment is set to last a year and its size will be determined. Technical details for setting up the joint centre were concluded and an agreement was signed.

In addition to deploying peacekeepers, Russia is helping some of the tens of thousands who fled the fighting to return to Karabakh itself. Moscow’s defence ministry on Tuesday said it had so far assisted in the return of more than 26,000 people. It said its peacekeepers had also cleared mines along the Lachin corridor and helped restore a power line destroyed during the fighting.

Moscow’s peacemaker role has overshadowed France and the United States – the three countries that form the Minsk Group, which led talks on the Karabakh conflict for decades but failed to achieve a lasting agreement.

France’s position in future negotiations may be further under threat after Azerbaijani legislators last week demanded the country be expelled from the Minsk Group. The move came after the French Senate adopted a non-binding resolution calling on France to recognise Karabakh as an independent state.